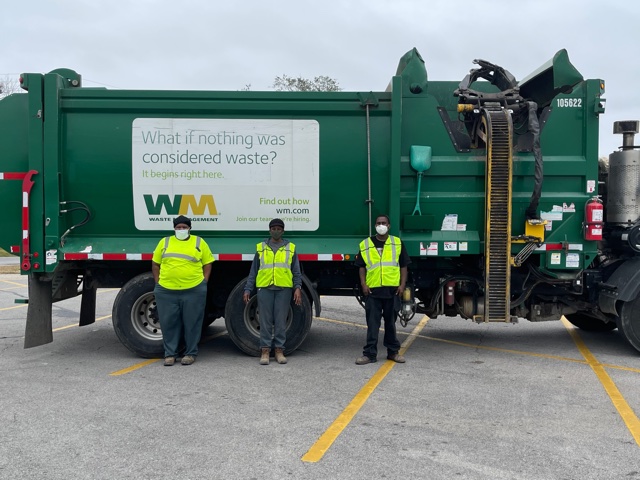 For 18,000 weeks, according to David Smith, his mother, Grace Smith, made sure her waste collection team had refreshments waiting for them.

Her generosity was well known and first brought to this reporter’s attention when a worker was injured on the job a couple of years ago. Ms. Grace called to ask who it was and if, “Is it one of mine? I take good care of them and I pray my guys are OK.”

She relayed a story of how hot it was outside one day as she was watched the crew collect the garbage along her street. She said they looked as if they could use a drink of water.

She offered them bottles of water that day and started leaving a cooler with drinks and later added snacks as well.

“For 35 years she would say, ‘David I have to go, I have to take care of my trash collectors.’ She would then tell me how she needed two cans of coke, two root beers, cracker jacks and candy,” David said. “She was good to them and in they were good to her.”

Grace told her son that she wanted a garbage truck in her funeral procession.

“Her son reached out to us and said it was her wish to have a truck in the procession,” Waste Management Director Public Affairs Lisa Doughty said. “They were like part of her family. She was part of the WM family and we began working on making it happen.”

This is just one example of the impact she had on the lives of so many people throughout Orange.

In her obituary, which can be read in it’s entirety on page 4, it reads: She leaves behind a legacy that will be long remembered in the hearts of those who knew her. She was over the top generous. Each week, over the past 35 years, she placed prepared snacks and drinks for her garbage men and placed them outside on her porch using her walker.  She had a card ministry and over the past decade has mailed thousands of cards to the sick and those who needed a kind word.  She led the Joy Club at her church which she dearly loved.

Joy in JOY Club stood for Just Older Youths. A phrase which described her perfectly.

She is survived by her three children, Harold Smith Jr. and wife, Deanna, David Smith and wife, Nancy, and Patti Cochran and husband Lawrence.  She has four grandsons, Jason, Eric, Brandon and Adam.  She has eight great grandchildren, Payton, Zachry, Caleb, Nathan, Samantha, Sara, Cameron and Hayden and one “adopted son” Mike Feagin.