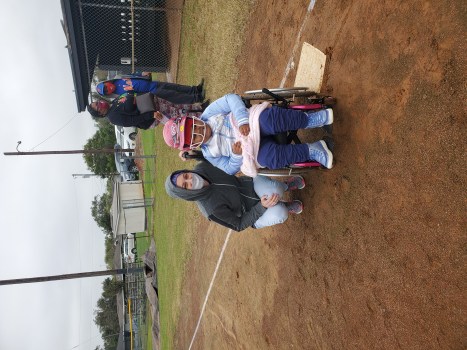 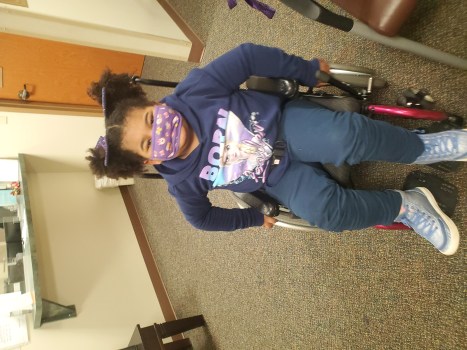 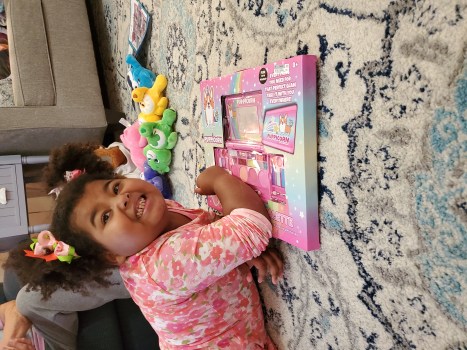 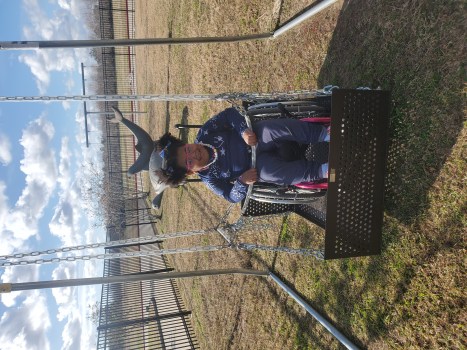 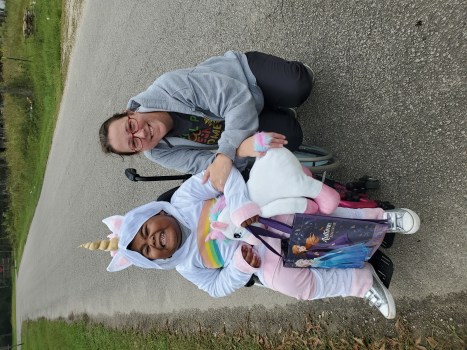 Photo courtesy of Melissa Johnson Grace, with her mom, Melissa Johnson, are looking forward to having a wheelchair accessible van to help bring Grace more independence.

Melissa Johnson took one look at an infant in the NICU and instantly knew the baby was her daughter.

“She came straight home from the hospital and I adopted her at three months,” Johnson said. “I knew she was my daughter from the first time I saw her.”

Born at 29 weeks and suffered a brain bleed at birth, Grace is now a six-year-old filled with laughter and with a contagious smile.

“Grace has hydrocephalus, a VP shunt, and cerebral palsy affecting mainly her legs and her ability to walk,” Johnson said. “Her legs are very stiff and standing or walking independently is not possible at this time.”

Grace has Cerebral Palsy which requires her to use a wheelchair to be mobile and have some independence.

“Making the move to a wheelchair was a big decision and one my heart struggled with, Grace has embraced her wheelchair,” Johnson said. “She races the other kids when she goes to school.”

She attends school one day a week to keep up with testing and to interact with other children.

“We homeschool the rest of the week because it tires her too much,” Johnson said.

While the wheelchair has created advantages for the family, it has also brought new challenges.

“Grace is not able to stand independently at all and has to use a walker,” Johnson said.

This leaves Johnson to pick Grace up to move her from the car to the vehicle seat as well as lifting Grace up. After Grace is secure in the vehicle, Johnson spends more time breaking down the chair to pack into the back of the vehicle.

“It takes about 15 minutes to get Grace in the vehicle,” Johnson said. “Which does not sound bad until it is 100 degrees outside, or its cold or its raining.”

A wheelchair accessible van, such as LOVErescue.org is hosting a fundraiser for would help bring new self-sufficiency and peace of mind for Grace and her mother.

“The van we selected is one I think will last for a long time and can be refitted for Grace when she is ready to learn to drive,” Johnson said.

Love Rescues is a nonprofit organization whose mission is to reach the poor with the love of Christ, rescue them from poverty, and renew their identity, according to its official website.

Johnson, as a single mother, has provided everything Grace needed including remodeling the bathroom to fit Grace’s special needs. But a wheelchair accessible van was outside her means.

She reached out to different organization and grants for assistance only to discover she did not qualify for any of them until Love rescues stepped forward to offer help.

Part of the higher expense for the vehicle is the floor has to be dropped to allow a wheelchair and the automatic ramp sliding into the floor.

“Later, the front seat can be removed and hand brakes added,” Johnson said. “We have a long-term plan and this van is specific to her needs.”

While the goal of $75,000 has not quite been met at press time, Johnson remains optimistic.

“Hopefully soon we will be at 100%,” Johnson said. “At this time 166 so far have given to help. That is wonderful especially during a pandemic and during the hardest of times. It is amazing to see the hand of God work to make one little girl smile.”

To make a donation, visit https://www.flipcause.com/secure/cause_pdetails/MTA0MzMz