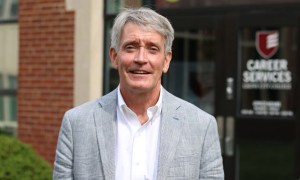 John and his parents head to their first college admissions visit. After the tour and interview, they hear the admissions counselor say, “John, we are so impressed with you both academically (John has a low B average) and personally that we want to give you a $15,000 scholarship right up front.” John is immediately overwhelmed by this compliment and scholarship offer. He is taken aback by the thought that they have so quickly and specifically selected him for this grant. He thinks, “they must really be impressed by me and want me to attend their college.” The $50,000 annual price-tag for this college might now be within reach—with the help of major student loans. As John continues in his college search, he is consistently offered similar scholarships.

John has just been duped by what is called “discounting” in higher education. Simply put, discounting is unfunded, fake scholarship money that is offered to prospective students. Yes, unbelievably, this practice, with a very few exceptions, is used by most private colleges and universities across the country. Here is how it works: College X purposefully inflates its costs per year for a full-time student to $50,000, knowing full well that the actual cost to educate and house an individual student on its campus is $30,000. This magically invents $20,000 per student of Monopoly cash to lure individual students to the campus.

A white paper written by Dr. P. Jesse Rine, entitled “A Shell Game by Any Other Name: The Economics and Rationale Behind Tuition Discounting,” defines discounting and researches its use by private colleges. David Weerts, the Director of the jCENTER for Innovative Higher Education at the University of Minnesota, stated in the preface of that document that the “alarm bells are sounding, signaling that tuition discounting may be deceptive, spiraling out of control and harming public confidence in American higher education.”

Why would a college choose to be this disingenuous? The answer: student recruitment. Most private colleges adopt this fraudulent policy to paint an untrue financial picture for prospective students, and it makes their college more attractive. Many colleges are in financial difficulty, so they must get students to enroll. This is an admissions ploy to enroll an incoming freshman class each fall. There are other intended implications of discounting: Families are impressed by the large price-tag, thinking that the higher sticker price means a better value and education. Prospective students are under the impression that they have been specifically chosen for funded and endowed scholarships. This results in puffed-up egos and a false sense of entitlement. What they do not realize is that most students receive these same unnamed, unfunded, non-existent scholarships.

Each college calculates and publishes the total amount of scholarship monies given out each year. Incredibly, many discounting schools actually claim this per student unfunded scholarship money to be real dollars and will publish a huge, almost unbelievable, amount of total aid awarded. Any amount paid by families over the actual individual student cost is bonus income for the college. Some families will pay the full price. Unknowingly, these folks are paying for the education of other students, which some have called the “classmate subsidy.” Rine states that the yearly total unfunded scholarship amount average (per undergraduate private college) is in the tens of millions of dollars and is growing each year.

The implications of discounting are far-reaching. Selecting an educational community that will shape your life’s perspective is now a lowest-price, retail-buying experience. Education is bought, just like buying a new car or a television. Discounting has changed the landscape of how people select a college. Often, it is no longer institutional fit that primarily drives the college selection process but pitting one school against another for a few thousand dollars.

Listed tuition and room-and-board costs are no longer a valid barometer to compare colleges. Actual per student cost has ceased to drive valuation. Each year, schools can escalate their fictitious cost to any level. Discounting many times bolsters the perception of sub-par institutions.

Discounting is deceptive, out of control, and, subsequently, has harmed a trust in higher education institutions. Buyer Beware! Do not be taken in by the deceptive practice of college discounting.

Editor’s note: Grove City College is one institution that does not engage in this process of discounting.
Dr. Jim Thrasher is the Senior Fellow of Grove City College’s career services office and the coordinator of the Institute for Faith & Freedom’s working group on calling.