The number of recovered persons was 43 higher than the previous week at 3,761.

There are 5 less persons hospitalized due to the virus and no COVID related deaths were reported this week as the number remains at 46.

The Medical Center has been contacting and scheduling vaccines with many agencies and will continue to work closely with all first responder agencies to ensure those who want a vaccine, receive one.   If any first responder has questions about receiving a vaccine, they are encouraged to ask their supervisor for more details.

The first known case of a new and more contagious coronavirus strain has been reported in Texas, in an adult male resident of Harris County who had no history of travel, according to the state health services department and County Judge Lina Hidalgo.

The variant known as B.1.1.7 was first identified in the United Kingdom, where it has spread quickly, and cases have been found in several U.S. states, including California and Colorado. It does not cause a more severe disease, and vaccines “are expected to be effective against it,” the health services department said, citing the existing scientific evidence.

Because the man had not traveled, it’s likely the strain is already circulating in Harris County or Texas, health and local officials said Thursday — with Hidalgo saying she didn’t want to “pretend… this is something we can contain,” according to the Texas Tribune. 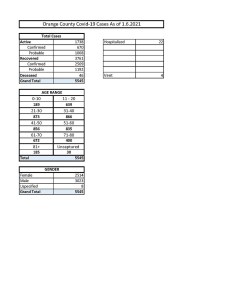 To The Leader The Orange County Economic Development Corporation announces the release of applications for the Small Business Recovery Grant... read more