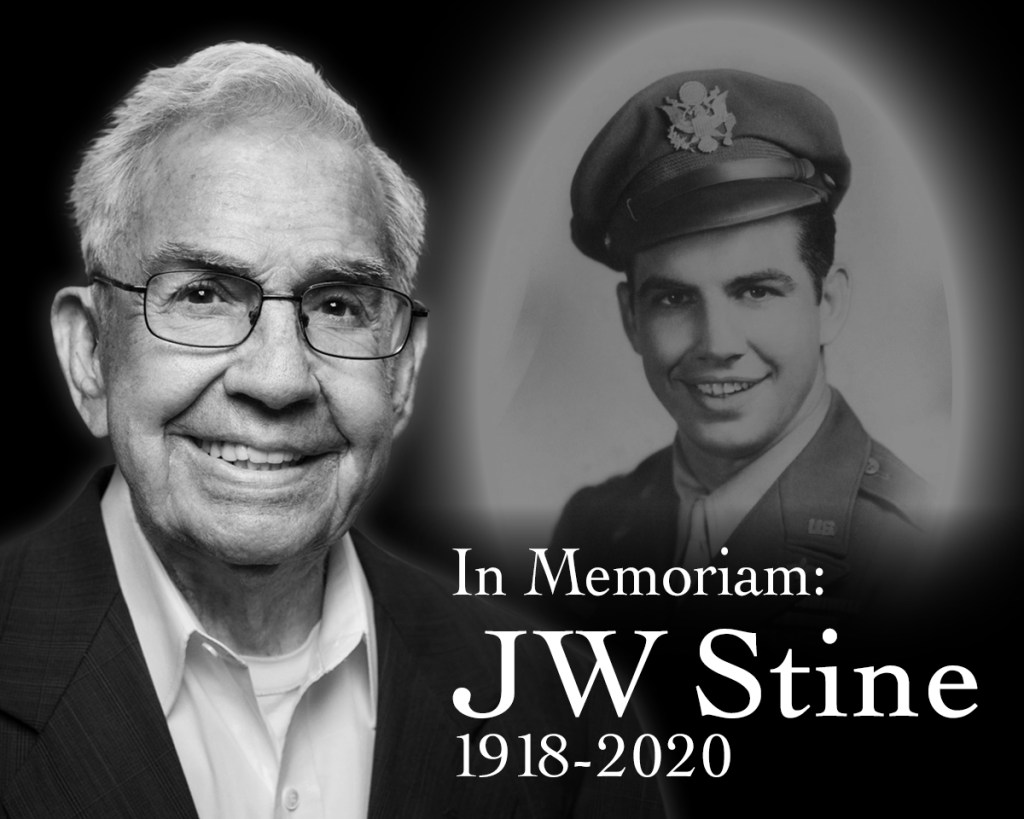 SULPHUR, LA – The Stine family, community, and nation lost a Great American in the passing of World War II veteran and Stine Lumber founder, Jackson William Stine, known to many as J.W. He passed away at home surrounded by his family on Wednesday morning at 9:40 AM, December 23, 2020 at the age of 102.

While World War I was still raging in Europe, Jackson William Stine was born on July 22, 1918 to Sulphur residents Andrew Stine and Elma Landry. Stine spent much of his youth boxing and playing football in Sulphur, LA, while earning a football scholarship to play for Normal College (today Northwestern State University). He met the love of his life Doris Rita “Dee Dee” Drost at Sulphur High School, and eventually, they wed on January 14, 1944 just before he was sent overseas to fight for his country in World War II.

Stine was a B-26 pilot in the European Theater flying over 40 missions. After returning home from the war, Stine opened a construction company, which would eventually become Stine Lumber, in Sulphur, Louisiana in 1946.

Stine Lumber has been in Sulphur for over 74 years and now has 10 locations throughout Louisiana and one in Natchez, Mississippi employing over 800 associates.

J.W. Stine is survived by seven children and their spouses; 31 grandchildren, 74 great grandchildren; and sisters Dorothy Byerly and Gerry McCallum. He was preceded in death by his wife Doris Rita

“Dee Dee” Drost and his brother Kyle Kenneth “KK” Stine. His family appreciates the outpouring of love and support from all of the communities throughout Louisiana and Mississippi.

“Gary, Janie, Jay, Dennis, David, Tim, and I are saddened to announce that after 102 incredible years, our dear Dad has died,” said eldest son Dick Stine. “J.W. Stine was a man of the highest character and integrity, and the best dad a son or daughter could ask for.”

“The entire Stine family will forever be grateful for JW’s life and love, for the compassion of those who have taken care of and prayed for Dad, and for the condolences of our friends and neighbors,” Dennis Stine, CEO of Stine Lumber said.

Twin brother David Stine remarked, “In many respects, he lived the American Dream…he married his high school sweetheart and they spent a wonderful 67 years together before her passing in 2011. He was a loving father to seven children, a WWII decorated pilot, an entrepreneur starting a business which would eventually include all six sons and 800 associates. He was a philanthropist giving back in the communities he served. He had a strong faith in God and lived it with humility and gratitude. His legacy lives on through us and all he came in contact with over his many years.”

Details on a celebration of J.W.’s life will be announced shortly.