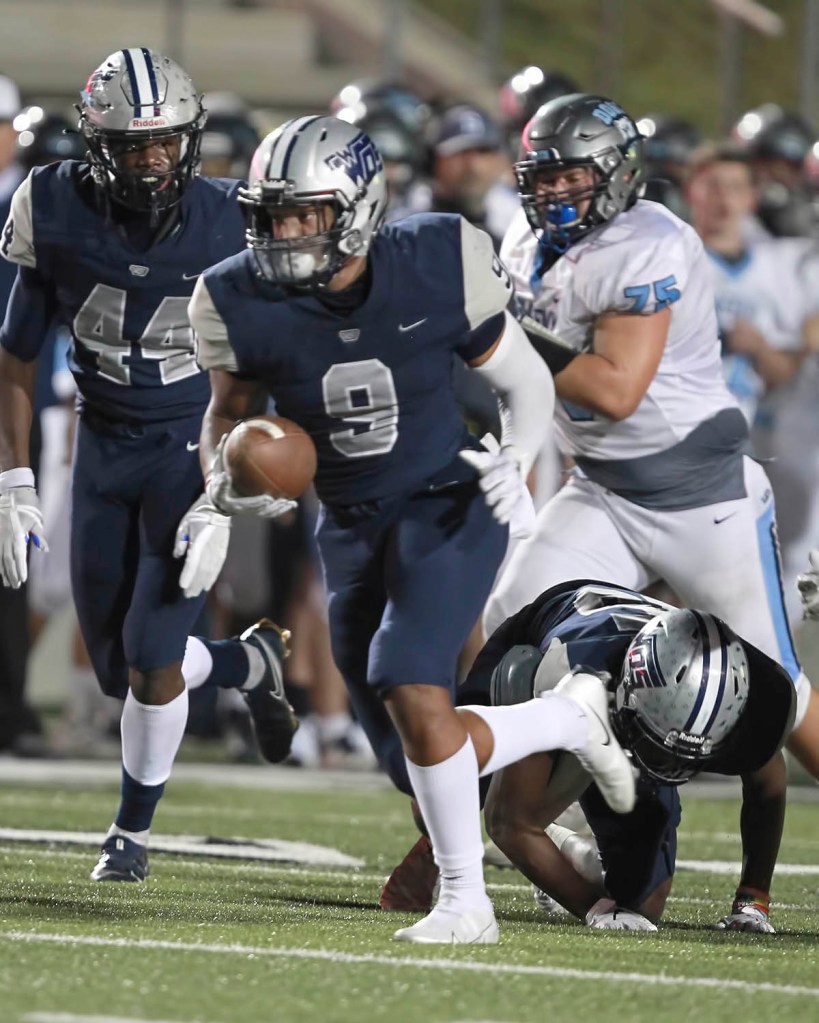 Mark Pachuca/Orange Leader WO-S linebacker Tyrone Brown scoops up a fumble and returns it for a touchdown against Sweeny in the playoffs.

Another high school football season has reached a close as Christmas Holidays are in full swing.

In the Orange County area, it was quite a season for many players, especially those seniors that wrapped up a great time representing their respective schools.

Of course, plenty of applause need to go to all the players, coaches and school districts for managing it through an entire football season while battling the COVID-19 virus.

It was a challenge for sure, but everyone involved gave a top-notch effort in adhering to all of the protocols.

The Orangefield Bobcats and Vidor Pirates were our other two local playoff teams, both teams snagging fourth-place finishes in their respective districts.

I just want to thank everyone that was involved to make our season happen, including the skills of Caleb Adams and Keagan Smith in writing stories and the masterful photography work of Mark Pachuca and Tommy Mann, Jr.

So without further ado, the 2020 All-Orange Leader Team has been selected and there were a lot of standouts throughout the season.

Brown, who will take his talents to Baylor University, was such a key cog for the Mustangs the last three years on defense.

This season he led the stingiest defense in Southeast Texas as he compiled 131 tackles, seven tackles for losses, six forced fumbles. He recovered three fumbles and brought back a fumble 61 yards for a score.

Our Offensive Player of the Year is WO-S senior quarterback Jerren Terrell. Terrell completed 87-of-167 passes for 1,497 yards and tossed 19 touchdown passes and only three interceptions. He also rushed for three TDs.

Our defensive MVP is defensive lineman Carmello Jones. The junior made a major impact, especially in rushing the passer. He compiled 75 tackles, nine sacks, had 10 tackles for losses, four quarterback pressures and two caused fumbles.

Our Coach of the Year is once again WO-S’ Cornel Thompson., who now has a 119-20 record as the head coach of the Mustangs.