And Now You Know: Sabine River Memorial Bridge was built in 1927 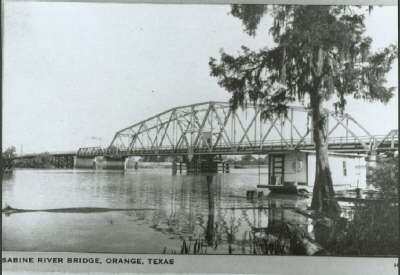 At the time it was conceived and constructed, the Old Spanish Trail was the most ambitious highway project undertaken in the United States. The highway ran from Jacksonville, Florida to Los Angeles, California. Part of the highway passed through Orange.

The section of the highway at Orange crossed the Sabine River by means of a slow ferry. The original ferry had been operated by Bob Belile and crossed the river from a point near Little Cypress Bayou to the highway that crossed the marsh across from Orange.

The ferry was purchased by W.T. Burton and the crossing moved to the foot of Elm Street in Orange. Burton expanded the ferry to a capacity of 32 automobiles.

The ferry was slow and by 1920, progressive thinking citizens of Orange were considering a bridge crossing.

In 1920, a committee of Orange merchants and taxpayers handed a resolution to the county commissioners asking for a bridge to be built across the river at Orange.

In 1922, Orange voters approved a $700,000 bond issue for construction of a bridge. In 1924, an agreement between the governors of Texas and Louisiana, highway officials, and state engineers was signed to build the bridge and guarantee financing.

By the summer of 1927 construction of the bridge was underway. The July 17 edition of the Orange Leader reported: “There is more talk regarding the bridge opening here November 11 than anything else in this section, in the opinion of all. Other municipalities are manifesting a very keen interest.”

A few days later the Leader noted that the swing span of the bridge was “going up fast” with a large percentage of the steel made to order for the Brown-Abbott Company to construct the bridge now used up. “The steel workers have made unusual progress during the past week putting up and riveting the steel over the center of the river. In spite of the excessive heat, progress would indicate the bridge would be complete before September.”

Surfacing the approach to the bridge would cost $750,000 and meant that Green Avenue would have to be widened from Fifth Street to the bridge to be uniform with the width of the bridge.

The Orange committee planning the opening ceremony for the bridge was contacting the Louisiana Highway Department to determine when the marsh section of the highway would be ready for use. It was expected that the bridge would be in use about 30 days before the official opening.

The opening of the bridge would be jointly sponsored by Orange and Calcasieu Parish officials.

The Texas Highway Department had designated the bridge as “the Sabine River Memorial Bridge” in honor of the war dead from the area and it was expected that the names of the deceased would be entered on plaques.

On November 8, details had been worked out for the official bridge opening to be held November 11 at 10:45 a.m. “sharp.”

Governor Dan Moody of Texas and Governor Oramel H. Simpson of Louisiana as well as 750 invited guests had sent assurances of attendance and Orange officials expected an overall attendance of 15,000.

On the eve of the bridge opening the ferry service was discontinued. Ferry operator Burton issued a statement thanking all who had used his ferry over the years.

An estimated 450 cars crossed over the bridge in the first 12 hours of use and by 7 a.m. there was a large increase of traffic. The Leader reported that “In spite of the fact that there were several cars at all times running over the bridge, the structure held its place and there was very little vibration. It is a 1928 model with all the improvements.”

It was a milestone in the road of progress, it replaced an old, slow ferry, but like the ferry it would be replaced by a newer, more modern bridge with the opening of Interstate 10 in 1960.

When the bridge was closed, the memorial plaques were claimed by the Lloyd Grubbs Post 49 of the American Legion. When the new post home was built on Green Avenue, the plaques were placed on each side of the entrance doors.