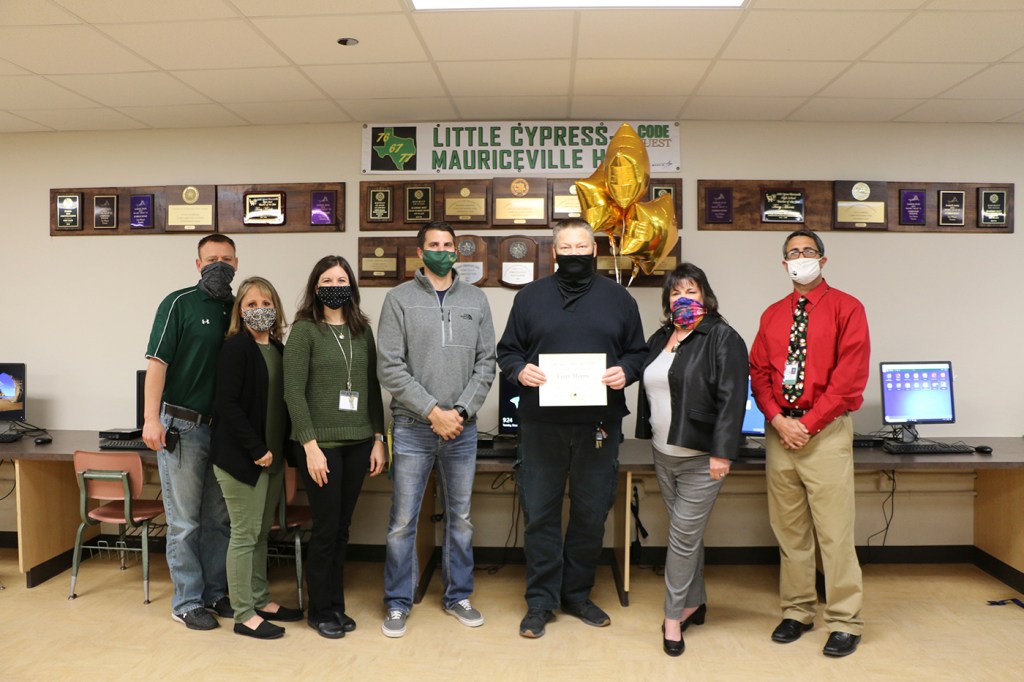 Terry Morris, Computer Science teacher with Little Cypress-Mauriceville High School, was notified this week that he was awarded the 2020 University Interscholastic League Sponsor Excellence Award. The recognition comes with a $1,000.00 check for personal use.

According to Stacey Smith, Student Activities and UIL Coordinator for LCMHS, “Terry Morris is super deserving of this honor. He gives graciously of his time and talents to coach LCM teams to success. He also shares his knowledge base to help other neighboring schools and others from around the state to build programs in their schools.”

Morris coached Number Sense from 2011-2017 and began coaching Computer Science in 2013 through the present. His teams and individual students have amassed an impressive array of championships during his tenure as a UIL coach. These include 10 District Team Championships, 6 Regional Team Championships,

Mr. Morris explained his mission and some of the reasons for his students’ success.

“UIL Academics allows students to find their passion and test their abilities. I introduce UIL materials in my classes every year to allow my students to show their skills and talents. UIL competition teams allow students an outlet, a sense of belonging, and a place to call home. Several of my most successful students at UIL competition were not in the top twenty five percent GPA category in their graduating classes. However, through UIL they found a competitive outlet that gave them a sense of belonging, something to take pride in, and a focus for their future endeavors. For some, it gives them a reason to want to come to school. It allows students to realize that hard work is a pathway to success. It shows them what is possible, allows them to chase excellence and gives them a head start on their future. It also allows students, some for the first time, to see a college campus during the UIL Student Activities Conference (SAC) or regional and state events. Other events, like Hewlett Packard’s Code Wars and Lockheed Martin’s Code Quest, allow students to visit actual places of employment and get a firsthand look at a real-world example of what their future could be. As a teacher, it’s fulfilling to help the students who are willing to put in the time at conferences, after school practices, and weekend meets succeed. The benefits of these competitions to the students as well as their sponsors is immeasurable and life changing.”

Superintendent Stacey Brister said, “Terry is an outstanding teacher and UIL sponsor. He gives tremendous amounts of time to his students to help them be successful. His goal is for his students to be the State Champion every year in Computer Science and gives much time and effort to help them reach that goal. Terry is very deserving of this recognition.”