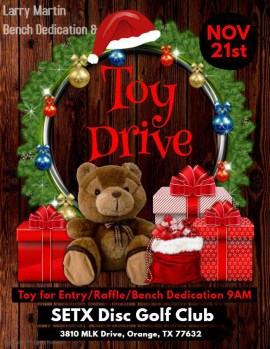 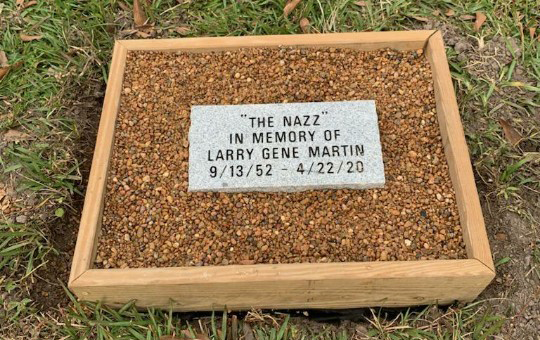 Courtesy photo A plaque honoring the late Larry Martin will be unveiled at a Disc Golf Tournament on Saturday at Orange First Church of the Nazarene located at 3810 MLK Drive in Orange.

Larry Martin may have passed away earlier this year, but he is not forgotten and will be honored on Saturday with a memorial bench and a plaque on Saturday to tee off the SE TX Disc Golf Club Tournament and Toy Drive.

Martin passed away on April 22, 2020. He enjoyed playing disc golf. His love for the game lead to his designing and building the disc golf course, The Naz Disc Golf Course, at his church, Orange First Church of the Nazarene.

On Saturday, at 9 a.m., as registration begins for a Toy Drive Tournament hosted by SE TX Disc Golf Club at the Nazz course, a dedication will be held for a memorial bench the club donated in memory of Martin.

Orange First Church of the Nazarene has installed a plaque at the course in Martin’s honor.

Registration fee for the tournament is toy of a $15 value. The toy drive is just one more way to honor a man who gave so much to the community.

“Larry was the first one at the church after Hurricane Harvey,” Michael Bell, a friend of Martin’s said. “He was there every day for the rebuilding of the church.”

The church, like so many others in the area, flooded during the historic storm.

“He was always there when someone was in need of something,” Bell said.

Another reason many are excited the SE TX Disc Golf Club opted to hold their toy drive at the course Martin created.

Face masks are required at the Pavilion area but are not required on the course where social distancing will be possible.

Disc Golf is played like traditional golf, but with disc golf discs instead of balls and clubs. One throw (stroke) is counted each time the disc is thrown and when a penalty is incurred. The goal is to play each hole in the fewest strokes possible, according to https://discgolf.com/

Disc Golf Association was established in 1976 by Ed Headrick to form a new international sport and to promote the installation and use of disc golf courses around the world. Ed coined and trademarked the term “Disc Golf”, and he envisioned a game that would explode in popularity. “Steady” Ed traveled around the country to install courses, to recruit players to the new game and to add people to the Professional Disc Golf Association, a new disc golf association he created to establish the rules of the game.