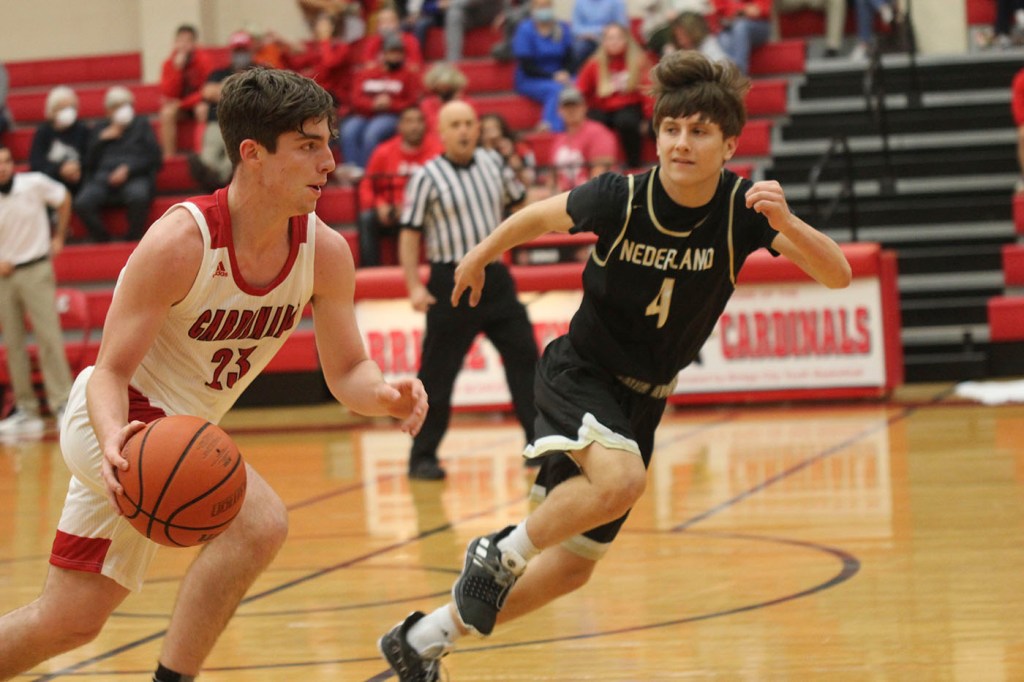 RIDGE CITY – Not being able to overcome a rough first quarter and not able to contain Nederland post Tyler Jackson, the Bridge City Cardinals battled hard but fell to the Bulldogs 65-52 in the season opener for both teams at Cardinal Gym Tuesday night.

Jackson finished with a huge double-double for the Bulldogs, scoring 33 points while snagging 13 rebounds. He had 13 points and seven boards in the first quarter as Nederland sprinted out to a 22-11 by the end of the first quarter.

The Cardinals, despite facing depth issues with three players not suiting out, kept plugging away the rest of the night, drawing closer and putting pressure on the visiting Bulldogs.

Bridge City got as close as 35-32 in the third quarter but Nederland closed the quarter on a 15-8 spurt to lead 50-40 going into the fourth.

The Cardinals got as close as 57-50 midway through the fourth on a Bryson Constance bucket but Nederland ended it a 8-2 run. Jackson scored 11 points in the fourth quarter, including eight of the final 10 Bulldog points to ice it.

Bridge City finished with just 14 turnovers while Nederland had 16.

The Cardinals had a superb night at the free-throw line, sinking 18-of-20 while Nederland went 15-of-24.

The Cardinals will look to bounce back Friday when they play host to the Liberty Panthers.