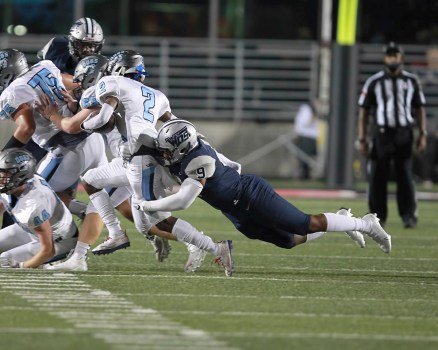 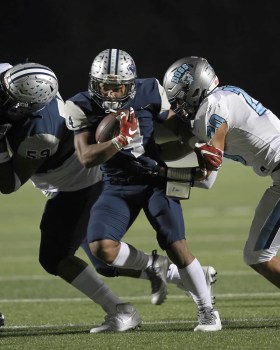 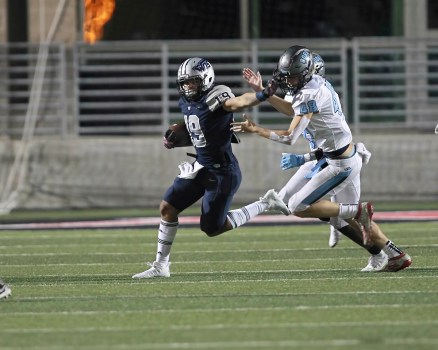 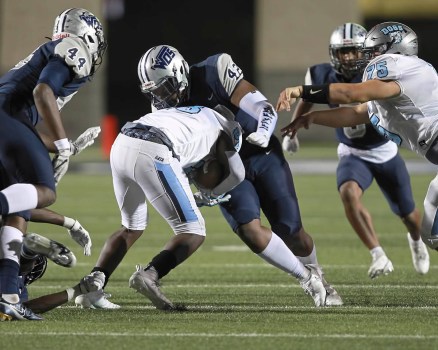 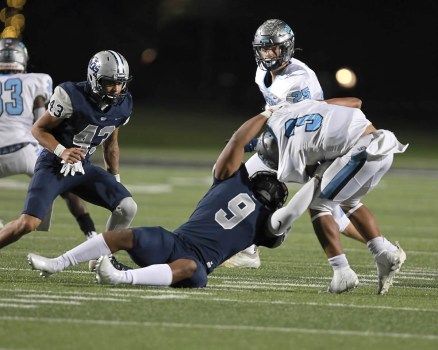 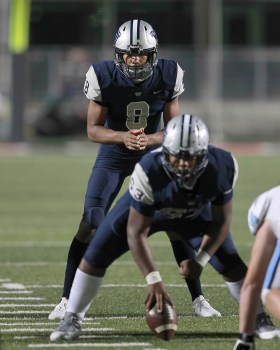 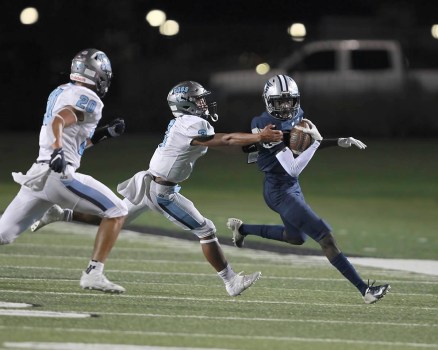 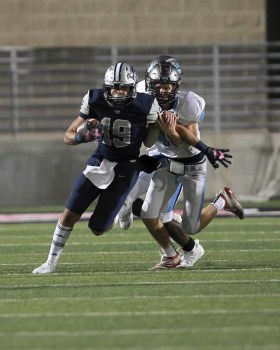 NEW CANEY – Another year, another blowout win for the West Orange-Stark Mustangs in the bidistrict round of the Class 4A Region III playoffs against an inferior fourth-place team.

The Mustangs put the hurt on Sweeny early and often as they cruised out to a 38-8 lead by intermission, outgaining the Bobcats 277-82 in the half.

Sweeny quarterback Trace Holmes completed 4-of-12 passes for 57 yards but and was picked off twice and had a fumble. He rushed 21 times for 24 yards. Tailback Xavier Woods had 11 carries for 50 yards.

The Mustangs got a nice interception from Artavious Samuel on Sweeny’s first possession as he picked off a Holmes pass just past midfield and brought it back to the Bulldog 30 with 8:40 in the first quarter.

On the very next play Gales broke through the middle pretty much unscathed as he darted 30 yards for the score. Angel Ibarra booted the extra-point to give the Mustangs a 7-0 edge with 8:30 in the first quarter.

After holding Sweeny to a quick three-and-out wrapped up by a big sack of Holmes, the Mustangs took over at the Sealy 37 on their next series and scored three plays later when Terrell found receiver Jalen Thompson wide-open streaking across the middle for a 38-yard touchdown, pushing it to 14-0 with 5:05 in the first quarter.

The Bulldogs blew a coverage on the Mustangs’ next possession when Terrell spotted Thompson all by himself on the left side just past the line of scrimmage and Thompson bolted down the left sideline all by his lonesome for a 53-yard touchdown connection, making it 21-0 with 2:15 in the first quarter.

The Sweeny offense woke up the next time they had the leather as they hit paydirt quickly as well, rolling up 56 yards on just three plays.

Woods broke around the left side for a 42-yard scamper to the Mustang 18 and on the next play Holmes kept it up the middle on a quarterback draw for an 18-yard touchdown. Fullback Hogan Ashford ran in the two-point conversion, making it 21-8 with 0:48 in the first quarter.

The Mustangs got good field position on the ensuing kickoff, setting up at the Bulldog 31 with a facemask penalty on the play helping them out. WO-S drove all the way to the Bulldog 8 but Sweeny rose up with a big sack of Terrell and standout Mustang kicker Angel Ibarra came in and nailed a 36-yard field goal to give WO-S a 24-8 lead with 11:14 in the half.

The Mustangs put together a six-play, 79-yard scoring drive capped off by a 21-yard touchdown dart over the left side by Gales to make it 31-8 with 5:54 in the half. Terrell passed for 31 yards on the march, with a 18-yard completion to Jayson Zeigler, Jr. and 13-yard strike to Jerald Brown, Jr.

After slamming the Bulldogs on a fourth-and-1 attempt from the Sweeny 34, the Mustangs scored two quick plays later. Jamaal Shaw broke loose on a 13-yard run and Zeigler, Jr. capped it with a 21-yard jaunt around the left end to increase the margin to 38-8 with 4:13 in the half.

Woods had 38 yards on seven carries on the ground for the Bulldogs while Holmes had 27 yards on 10 totes. Holmes was just 1-of-6 for 16 yards.

A running clock was utilized for much of the second half.

The Mustangs added to the Bulldogs’ misery on Sweeny’s first possession of the second half when Thompson picked off a Holmes pass over the middle and returned it 26 yards for a touchdown, making it 45-8 with 9:42 in the third.

Gales sent the Bulldogs reeling when he fielded a punt at the Mustang 40 and darted and weaved over the middle and then cut down the left sideline for a 60-yard punt return for a score, increasing the gap to 52-8 with 4:53 in the third.

The fourth quarter started and the Mustang offense still had not got on the field but that didn’t matter.

Mustang standout linebacker Tyrone Brown continued the onslaught when he scooped up a Holmes fumble and scooted 60 yards for a score to push it to 59-8 with eight minutes left.