OP-ED: Officially a Mighty Mustang after a 25 year battle 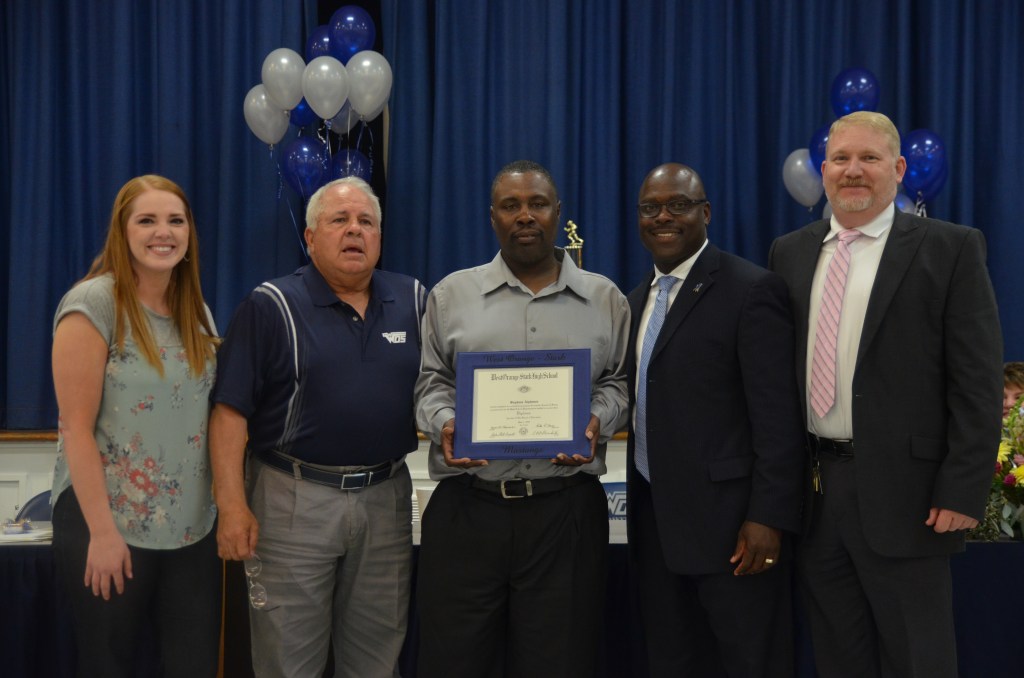 This week I would like to share a story sent to us by a WOS alum. In his own words, this story is heartwarming and sends the message that you should never give up on your dream. – Dr. Rickie Harris

I have a story that is unlike most. After 25 years of hard work and dedication, I became a West Orange-Stark High School graduate at 44.  My journey was not easy, but it was well worth the wait.
In 1993, I was a proud varsity football player for Coach Cornel Thompson and the mighty Mustangs. I worked hard on and off the field and was successful as a senior athlete and student. I passed all my classes and eagerly awaiting graduation. However, no matter how hard I tried, I could not pass a state math exam mandated by the Texas Education Agency. I repeatedly tried to pass the exam, but every attempt left me at least 2 points below the passing rate. On May 31, 1993, I stayed home while my friends walked across the stage. The feeling of failure settled deep within me, but I refused to allow myself to give up. I went back and attempted to take the state math exam more than 30 times, all to no avail.
As the months turned into years, I developed a steady career and started a family. I traveled around the country and worked my way up within my company. But deep down, I knew something was missing. The desire to be a Mustang graduate continued to haunt me.
In 2018, I visited a West Orange-Stark High School football practice. Coach Thompson saw me and approached me. We caught up on each other’s lives, and I explained that although I had tried many times, I could never earn my diploma. Coach Thompson promised to make some calls and see if there was anything he could do to help. Little did I know that conversation would change my life.
Three days later, I nervously waited outside the office of Ashton Knox, West Orange-Cove CISD Assistant Superintendent of Curriculum. I was so nervous that she would think I was just another dumb drop-out who should have given up a long time ago. I had been let down so many times before that I did not think this go-around would be any different. But boy, was it ever! I entered her office, and Mrs. Ashton Knox immediately shook my hand and treated me with absolute respect. Mrs. Ashton Knox said that she had already reviewed my files and made several calls to the Texas Education Agency on my behalf. Before even meeting me, she had set the wheels in motion to help me. I was shocked and at a loss for words. When I asked her why she was helping me, she said that it was her job to advocate for all Mustangs- past, present, and future.
After a series of phone calls and emails on my behalf, Mrs. Knox successfully proved to the Texas Education Agency that I had passed all my courses and passed three of the four required exams from 1993. To my shock, she confirmed that I was eligible to receive my diploma! Coach Thompson had the honor of calling me with the news, and that was a phone call I had dreamed about for so long. My 25-year long fight was over. At the 2018 West Orange-Stark High School Athletic Banquet, Dr. Rickie Harris, Superintendent, awarded me my diploma, and I became a West Orange-Stark High School graduate.
I will never forget the respect and dedication the Mustang team showed me. I have made lifelong friends through this journey. I stay in contact with both Coach Thompson and Mrs. Ashton Knox. Just recently, I had the pleasure of sharing with them that I’ve started working on my Associate’s Degree from Lamar State College-Orange. I am on the path to real success thanks to the Mustang team that believed in me, even after 25 years. I guess the saying is true “once a Mustang, always a Mustang!”