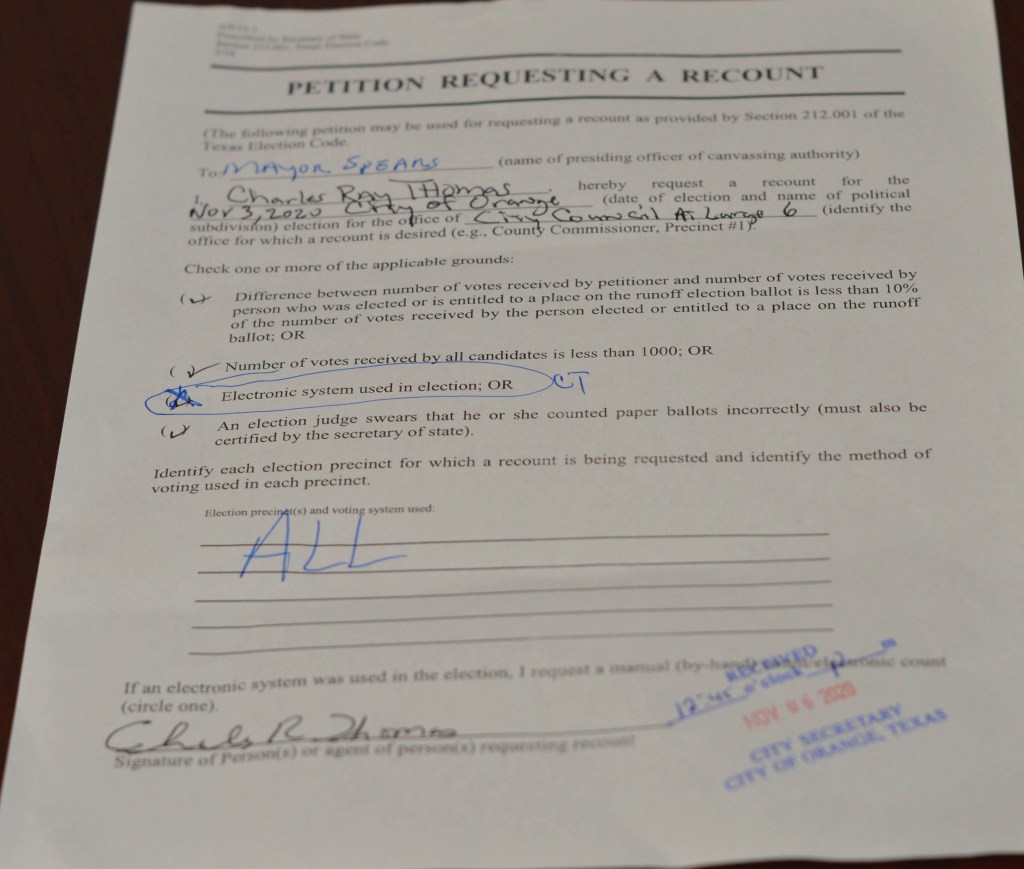 After defeating Charles Ray Thomas in the Tuesday Election, Paul Burch is facing a recount for the Orange City Council At Large seat. According to election night results Burch defeated Thomas 3,417 to 3,054 in the election. Terrie Salter held onto her position as she ran unopposed.

“I am very excited to win,” Burch said in a phone interview after the results came in Tuesday night. “I look forward to continuing to serve the people of Orange.”

On Friday, Thomas submitted a petition for a recount and a check for the amount of $940 to cover the cost of the recount. The check was from One Way to Jesus Full Gospel Church. A quick search could not find a location for the church in Orange. There was one showing it is headquartered in Chicago, IL.

The next step is the Orange County Election Administration will gather the ballots for the recount scheduled for November 12, 2020.

Senator John Cornyn was re-elected to serve the people of Texas in the United States Senate.

“Senator Cornyn ran an excellent campaign, and I want to congratulate him on a hard-fought victory,” said Governor Abbott. “Senator Cornyn has a proven track record as a leader who will fight for the interests of all Texans in our nation’s capital. He worked to provide Hurricane Harvey relief to Texans in need, combat human trafficking, and bring more jobs and economic prosperity to Texas. I know he will continue to be a powerful voice for Texans in the United States Senate.”

Representative Dade Phelan was reelected for his position in House District 21.

“The people of Southeast Texas deserve a representative who will fight for them, and that is exactly the kind of leadership Representative Phelan provides,” said Governor Abbott. “In the wake of Hurricane Harvey, Dade helped lead the charge in the Texas House to secure disaster relief and helped pass legislation to make Texas more resilient to natural disasters. The people of Orange and Jefferson Counties can count on Dade to work with me to improve education, create more jobs, and bring greater economic growth to Southeast Texas.”