Hawks slip past Bobcats in 2 OTs to nab third seed, OF gets fourth 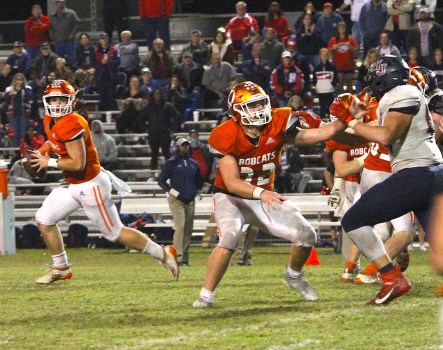 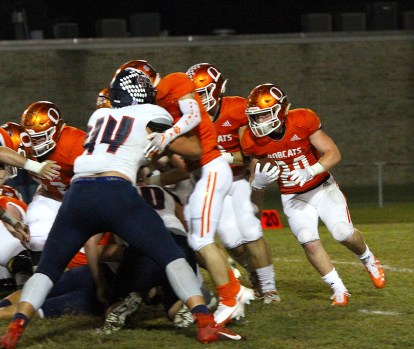 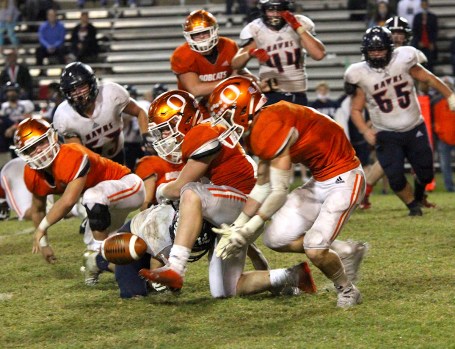 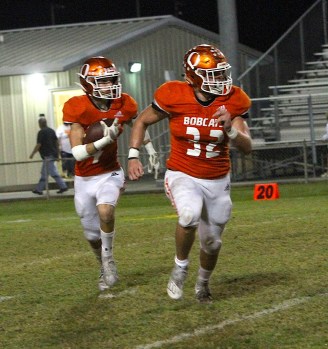 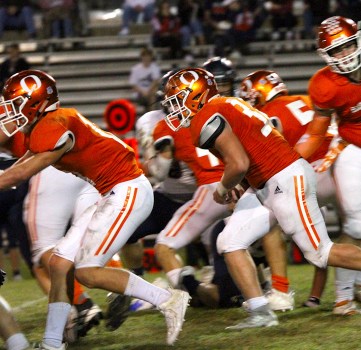 ORANGEFIELD – The Orangefield Bobcats fell to the Hardin-Jefferson Hawks 19-13 in Orangefield Friday night in two overtimes in a game that decided the third and fourth-place playoff seeds out of District 11-4A Division II as Hawk quarterback Jalen Porter scored the game-winner on a one-yard run in the second OT session.

Orangefield’s run game controlled the tempo, along with their defense, letting them get a lead and control it most of the game. Hunter Ashworth led the team with 85 yards on 17 carries on the ground and the two touchdowns for the Bobcats while Dwight Davis had 83 yards on 15 carries.

The Bobcats held the lead all game until the final minute of regulation, where the Hawks stormed back and found their offense. Jalen Porter would lead them on the ground with 83 yards on the ground and the final touchdown for the win. Porter was a big reason the Hawks came out with a win this week as he also passed for 68 yards.

H-J back Tyler Fountain had 74 yards on 16 carries while fellow back Dakota McNair had 71 yards on 17 totes.

The first quarter went scoreless, but the Hawks did get close to the end zone before the Bobcat defense stopped them. Both defenses held their own early making it a tight game.

The Bobcats get the game’s first points late into the second quarter. After a 16-play drive that ate up the clock, they punched it in on the ground, after opening up the air game. Dwight Davis and Hunter Ashworth would get the majority of the carries on the march, both converting crucial first downs to keep the drive alive. After a penalty backed them up, Gunner Jones dropped back and found Macoy Marze for a 12-yard pass and setting up an easier touchdown. Ashworth would take it in from there, finally punching it in with a 1-yard shove across the line. After the PAT went through, the Bobcats led 7-0 with 4:39 left in the first half.

The Bobcats would hold the small 7-0 lead into halftime. The Bobcat defense took control, stopping the Hawks attempts at the end zone. With just six passing yards against them and 99 yards rushing, you couldn’t ask for much more from a defense. With the style of offenses these teams have, the clock is a big factor. Only stopping a few times in the first half, making ball possession is the biggest factor in this game.

Ashworth got another rushing touchdown on the night, after a strong scoring drive from the Bobcats to open the fourth quarter. After a scoreless third quarter, the Bobcats extend their lead thanks to the ground game. Dwight Davis would break a big 16-yard run, and after a penalty they would double that run on the end of the play. Ashworth would break a 14-yard run, putting the ball on H-J 4. Ashworth would get the ball again, bounce it around the outside and score. The PAT would be no good, but the Bobcats led 13-0 with 10:34 left in the game.

The Hawks finally found the end zone late into the fourth quarter, thanks to a pass from Jalen Porter. Porter would call his own number a few times and pick up big yards and first downs against the Bobcats. Porter threw one to Brayden Martel from 22 yards out and Martel came down with it for the score.. After the PAT the Bobcats led 13-7 with three and a half minutes left to play.

The Hawks made a big play to tie the game with just a minute left to play. Porter led the team down field setting them up for a possible comeback win late. Porter launched one to Sam Dickerson for 39 yards and a touchdown for the Hawks. However, the extra-point was blocked by the Bobcats, keeping the game tied with just one minute on the clock.

The Hawks would force overtime and give themselves a shot to take a big win heading into the playoffs.

Both teams would come up short on their first tries in overtime. The game came down to which defense could bend but not break the most, who could will themselves to stop the other team.

The Hawks are able to pull out the win on the road in thrilling fashion in overtime. Porter would get the carry and push it in from a yard out. Hawks offense finally figured it out just in time for the win.