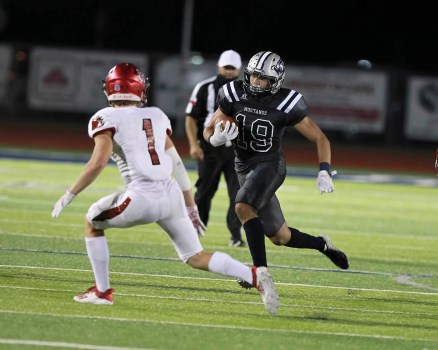 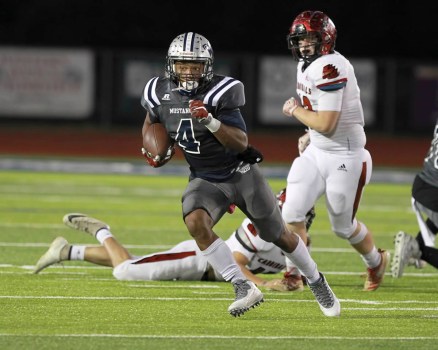 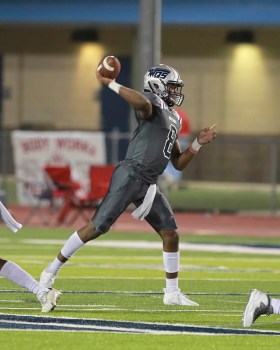 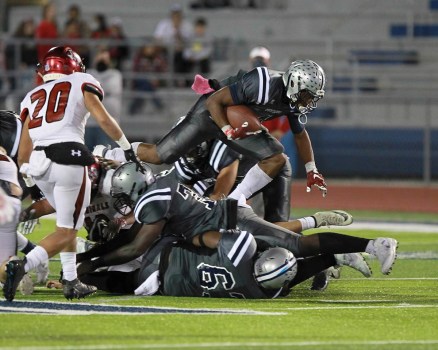 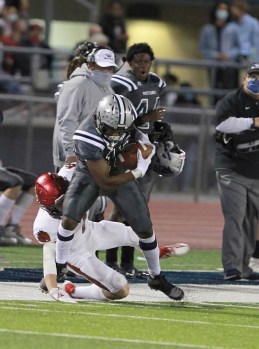 WEST ORANGE – For the 11th straight season the West Orange-Stark Mustangs can say they went undefeated in district as they wrapped up another district campaign with a 52-0 District 11-4A Division II victory over Orange County neighbor Bridge City.

The victory also pushes WO-S to a 30-0 all-time record against the Cardinals.

The Mustangs (7-0, 6-0) will now move on to face Sweeny in the Class 4A Division II Region III bidistrict round of the playoffs next Friday at 7:30 p.m. at Reed Stadium in New Caney.

Mustang senior quarterback Jerren Terrell completed 13-of-18 passes for 181 yards and three touchdowns. Receiver/running back Jayson Zeigler, Jr. had three touchdowns hauling in two in the air and one on the ground. He finished with five carries for 65 yards and had four catches for 57 yards.

The Cardinals could not get things going on offense as they had 11 yards on 32 carries. Quarterback Ethan Oceguera was 4-for-10 for 26 yards. James McAbee had three catches for 16 yards.

Running back JimSharon Bearden led the Cardinals with 35 yards on 17 carries.

The Mustangs dominated the game early against the Cardinals, scoring 21 quick points in the first quarter on their way to a 28-0 cushion by halftime.

The Mustangs zipped 63 yards in just four plays on the game’s first series. Gales broke loose on a 23-yard gain and fellow back Shaw capped it with a 40-yard touchdown dart around the left side for a score. Kicker Angel Ibarra booted the extra-point as the Mustangs led 7-0 with 10:53 in the first quarter.

The Mustangs scored again in four plays on their next possession by navigating 53 yards. Terrell hooked up with Zeigler, Jr. on a sharp pass over the middle as Zeigler, Jr. finished it from 41 yards out, pushing it to 14-0 with 7:26 in the first quarter.

After holding the Cardinals deep in their own territory, the Mustangs took advantage of great field position, taking over at the BC 27 and scoring four plays later when Gales scooted off the left side for a six-yard touchdown gallop with 4:10 in the first quarter.

WO-S marched 78 yards in six plays late in the half as Terrell completed four passes for 71 yards on the drive with the big shot coming on a 36-yard scoring strike to Thompson down the left side, making it 28-0 with 4:37 in the half.

Terrell completed 9-of-13 passes for 162 yards and two scores in the half.

Zeigler, Jr. had three catches for 53 yards at the half while Thompson had two grabs for 46 yards.

Shaw led the ground game with 40 yards while Gales had 35.

Oceguera completed 2-of-8 passes for 15 yards for the Cardinals. JT Fielder had one catch for 10 yards. Bearden paced the ground game with 29 yards on 11 carries.

The Mustangs went on to score 24 points in the second half, scoring 17 of them off of Cardinal turnovers.

After a fumble by the Cardinals on the first series of the second half at the BC 20, the Mustangs eventually settled for a 31-yard field goal by Ibarra with 7:58 left in the third.

Another Cardinal miscue gave the Mustangs the ball at the BC 12 on the next series and three plays later Terrell spotted Zeigler, Jr. for a four yard touchdown toss to make it 38-0 with 5:13 in the third.

The Mustangs capped off a five-play, 61-yard scoring drive with 10:54 remaining as Zeigler, Jr. scampered into the end zone from 32 yards out while playing Wildcat quarterback.

WO-S finished off the scoring with 4:22 remaining when Williams bolted into the end zone from two yards out to wrap up a seven-play, 46-yard drive.