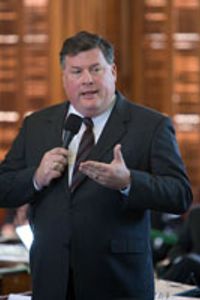 AUSTIN, Texas — Representative Dade Phelan (R-Beaumont) has appointed the Honorable Tommy Williams to serve as the Chairman of his Speakers’ transition team. As Chairman of the transition team, Williams will assist Rep. Phelan in recruiting staff, developing member work groups, and facilitating a smooth transition.

“Tommy is going to be a tremendous asset to the transition team, his knowledge of the Capitol and the people who make it work is unmatched. Tommy has decades of experience around the Capitol and has a wealth of knowledge that will be extremely beneficial during this transition process,” said Phelan. “I look forward to working with Tommy in the coming weeks as we prepare for the upcoming legislative session.”

“I am honored to serve as Chairman for the Speakers’ transition team. Dade is going to make an incredible Speaker, he is principled, trustworthy, and possesses the leadership qualities that are needed during this unprecedented time,” said Williams. “Dade will work constructively with every member of the House, Senate, and the Governor.”