Mustangs welcome Cardinals in 11-4A finale 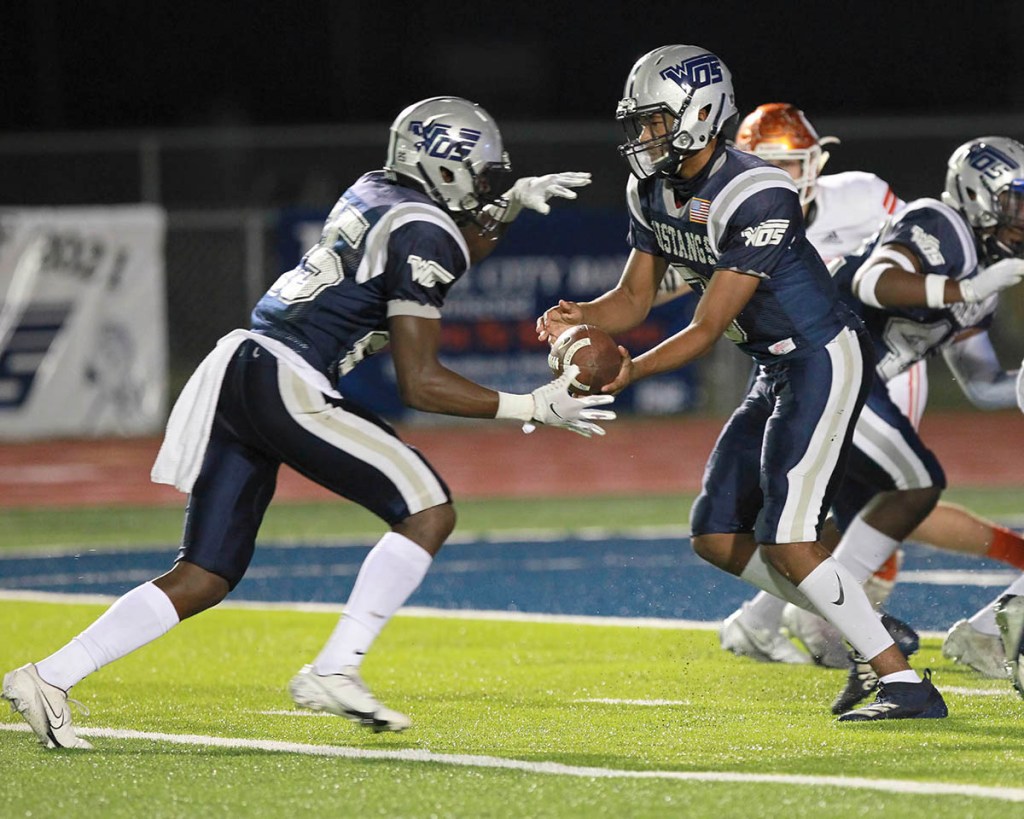 Mark Pachuca/Orange Leader WO-S quarterback Jerren Terrell prepares to hand the ball of to running back Jamaal Shaw against Orangefield earlier this season.

WEST ORANGE – After a bye week, the District 11-4A Division II champion West Orange-Stark Mustangs will look to cap off their 11th straight district title by welcoming in the Bridge City Cardinals for Homecoming Friday night.

The Mustangs (6-0, 5-0) will look to shake the rust off before heading into the postseason fray while the Cardinals (1-5, 1-4) will look to close out their season with a major upset.

WO-S will look to keep their long-time winning streak alive against Bridge City as the Mustangs are 29-0 all-time against the Cardinals. The Mustangs have outscored opponents 268-34 on the season.

The Cardinals battled Liberty hard at home last week before dropping a 15-12 decision to the Panthers.

The Mustangs will check into the Orange County battle with 11-4A’s top offense that averages 395 yards a game as they love to mix in both the run and pass.

The Cardinal defense, which allows 312 yards a game, will look to slow down the Mustangs on WO-S’ home turf.

Mustang senior quarterback Jerren Terrell, the leading passer in 11-4A, has had a solid campaign. He has completed 59-of-115 passes for 1,045 yards with 12 touchdowns and just three interceptions.

The Mustangs have a very balanced rushing attack. Junior Elijah Gales leads the ground game with 362 yards and four TDs on 44 carries. Jamaal Shaw has zipped for 333 yards and three TDs on 39 totes while Jayson Zeigler, Jr. has 252 yards and five TDs on 37 carries.

WO-S’ Jalen Thompson is one of two big-play receivers in this battle, along with Bridge City’s Austin Richardson.

The Cardinals, no doubt, will face the stingiest defensive unit in 11-4A as the Mustangs are allowing a mere 127 yards a game.

Bridge City, which is averaging 292 yards a game, is led by junior quarterback Ethan Oceguera, Oceguera has completed 54-of-121 passes for 820 yards with eight TDs and five interceptions. He has also rushed for 370 yards and three TDs on 57 carries.

Richardson has been a major deep threat for the Cardinals with his 11 catches for 329 yards and five scores. Cardinal J.T. Fielder is second in the district in receptions with 21 catches for 224 yards and a score.

JimSharon Bearden has proved to be a nice workhorse out of the backfield with 452 yards and three TDs on 96 touches.