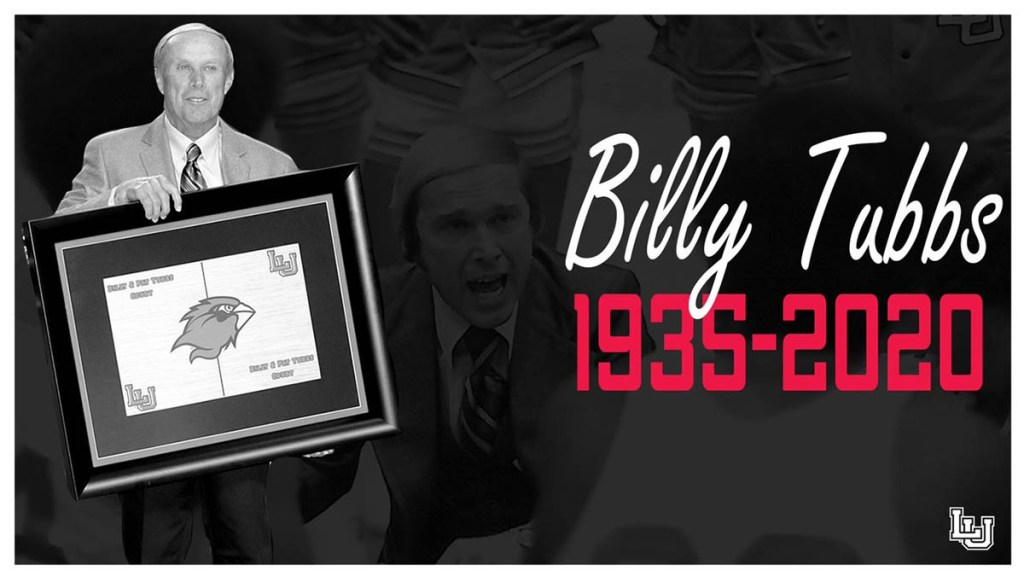 “When I first got the call, my initial thought was that of feeling like I got punched in the gut,” said Assistant to LU President for Community Relations and LU Hall of Honor member Norman Bellard. “Now our attention turns to Billy’s amazing family. Our thoughts, prayers and condolences go out to his wife Pat, and Tommy and Taylor, and the grandkids.”

“To a lot of the guys on the team, he wasn’t just a coach and a mentor but a father figure,” said Bellard. “That was true up until the point when he passed earlier today and that will remain with us for the rest of our lives. Billy was a trailblazer. He changed the face of college basketball – from the time he coached us in the late 70s to his success at Oklahoma and TCU.

“Over the years, Billy was very instrumental in not only the athletic achievements but also the things he taught on the court have remained with me through my whole career. He was a players’ coach. He was demanding but he helped us achieve success that most of us probably didn’t think we could achieve. From the 80-game home court win streak, to a top-five rank in scoring, some of the things we were able to accomplish almost doesn’t seem like it could’ve been possible,” added Bellard.

Known for his high-scoring offense and full-court press defense, Tubbs was a seven-time conference coach of the year. He earned four Big Eight Coach of the Year honors, two Southland (1978 and 1980) honors and a WAC Coach of the Year recognition.

In 1986, Tubbs was inducted into the Cardinal Hall of Honor. During his time as the Cards head coach, Tubbs posted a 121-89 (.576) overall record, including a 54-34 (.614) mark in Southland Conference play. When Tubbs took over the program, he inherited a squad that had not recorded a winning record in six seasons. Just two years later Tubbs posted an 18-win season and guided Big Red to a Southland Conference regular-season title. It would be the first of three straight seasons that saw LU fly to the top of the Southland standings.

“This is a very sad day for Lamar University,” said LU Director of Athletics Marco Born. “We are deeply saddened by the passing of Coach Billy Tubbs. In my short time here at Lamar, I’ve always looked forward to the reunions, and how popular Billy remained with our fan base. He will always be a big part of the Lamar University basketball family, and the Beaumont community. Our thoughts and prayers are with his wife Pat, their sons Tommy and Taylor, and his many close friends in the Cardinals’ family. He will be dearly missed.”

Tubbs’ followed up the 18-win season with 23 and 22-win campaigns. During his third season with the Cardinals, Tubbs guided LU to the NCAA Championships in 1979 and 1980 where he posted a 3-2 (.600) record. The 1979 squad was eliminated by eventual national champion Michigan State – who was led by future NBA Hall of Famer Magic Johnson – while the 1980 squad advanced to the Sweet 16 after victories over Weber State and Oregon State.

Tubbs oversaw one of the greatest runs in the history of collegiate basketball history. Beginning in February 1978, the Cardinals rattled off 80 consecutive wins on their home court, which at the time was the nation’s longest streak. The mark still stands as the school’s all-time record.

The players also reaped the rewards of Tubbs’ guidance. During his time in the Golden Triangle, he coached 15 All-SLC selections, including seven first teamers.

Tubbs was honored during the 2010-11 basketball season when the university renamed the court at the Montagne Center, Billy and Pat Tubbs Court.

Born in St. Louis, Mo., Tubbs originally came to LU (then known as Lamar State College of Technology) as a basketball player. He lettered from 1955 to 1957 where he averaged 6.8 points per game.