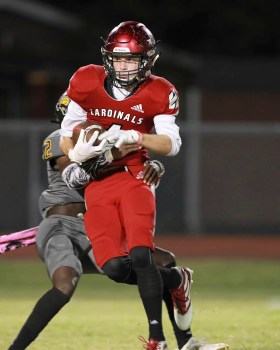 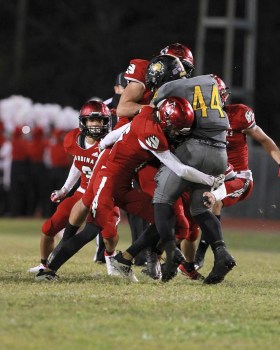 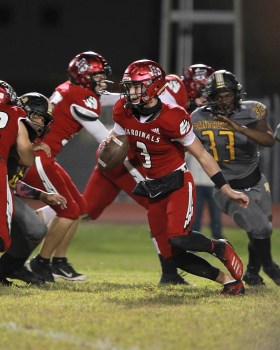 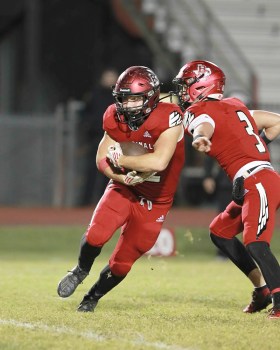 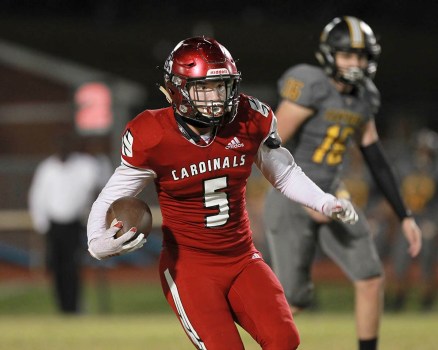 BRIDGE CITY – Using the punishing force of fullback Terrick Peterson, the Liberty Panthers snagged their first District 11-4A Division II win of the season by squeezing out a 15-12 victory over the Bridge City Cardinals Friday night at Ward Stadium.

The Panthers outgained the Cardinals 266-182 for the night as Liberty piled up 243 yards on the ground on 51 caries.

Bridge City quarterback Ethan Oceguera completed 3-of-7 passes for 109 yards and a touchdown. Receiver Austin Richardson had two catches for 78 yards and a score. The Cardinals had just 73 yards on 27 carries on the ground. JimSharon Bearden led the ground attack with 71 yards on 20 carries.

Vincent Harris added 48 yards on eight rushes for the Panthers while quarterback Kadon Nolan had 20 yards on six totes.

The Cardinals snared a 12-7 edge late in the third quarter by going on a 10-play, 77-yard drive after trailing 7-6 at the half.

Oceguera and Richardson capped it with a perfect 37-yard scoring strike down the right sideline with 4:27 in the third quarter. The extra-point attempt was blocked. Bearden had six carries for 38 yards on the series.

The Panthers retaliated on the following possession by navigating 75 yards in 11 plays to take the lead again.

Peterson carried six times for 30 yards on the drive . The big play for the Panthers on the march came on fourth-and-4 from the Cardinal 30 when they utilized a halfback pass from Austin Walker to receiver Keiron Joiner that went for 23 yards to the Cardinal 7. Two plays later Walker went off the ride side for a three-yard touchdown. Quarterback Kaden Nolan then found Walker for the two-point conversion pass to give Liberty a 15-12 edge with 11:55 remaining.

Liberty iced the game down with a 15-play, 68-yard drive that ate down the clock as Peterson had 54 yards on seven carries on the drive as they kneeled on it at the Cardinal 9.

The Panthers went in at intermission up 7-6 with both teams scoring a touchdown each on long, time-consuming drives.

The Cardinals were smooth on the game’s first series of the night as they worked their way down the field on a 10-play, 67-yard scoring march that chewed up 6:10 off the clock.

The big play came when Oceguera connected with big-play deep threat receiver Austin Richardson on a 42-yard strike over the middle that got to the Panther 12.

Four plays later on fourth-and-2 from the 4, Bearden bruised his way straight up the middle for four-yard touchdown. The two-point conversion run failed but the Cardinals went up 6-0 with 5:50 in the first quarter.

Liberty went ahead on a grueling 14-play, 67-yard scoring march to go up 7-6 midway through the second quarter. They did it all on the ground behind tough running from Peterson, Harris, Nolan and Manny Freeman.

The burly Peterson finished the drive with a three-yard touchdown run off right tackle. Kicker Bryan Montes drilled the extra-point as Liberty went up 7-6 with 7:10 in the half after a drive that ate up 6:48 off the clock.

Oceguera teamed up with running back Dorian Pruitt on a nice 31-yard dart that got to the Panther 40 with six minutes in the half but the Panther defense rose up and forced a Cardinal incompletion on fourth-and-10.

Standout Cardinal linebacker Harrison Gauthier picked off a Nolan pass at the Panther 41 after the ball went through the hands of a Panther receiver with 2:11 in the half.

However, the Cardinals failed to capitalize on the turnover as Liberty forced Bridge City into a three-and-out.

The Cardinals had 105 total yards in the half while the Panthers had 104, all on the ground.

Oceguera completed 2-of-4 passes for 73 yards while Bearden led the ground game with 19 yards on 11 tough carries.

Peterson powered his way to 44 yards on 10 carries for the Panthers in the half while Harris had 25 yards on four carries.

The Cardinals will head to West Orange-Stark next week while the Panthers return home to host Hamshire-Fannett.