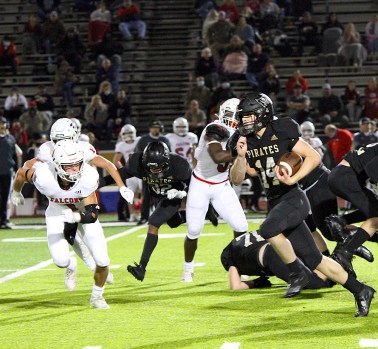 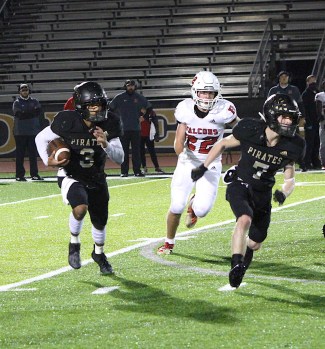 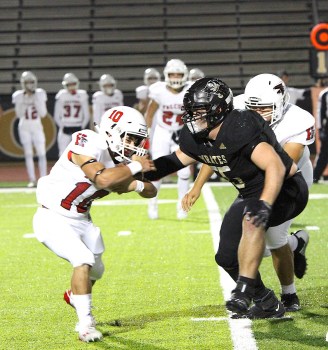 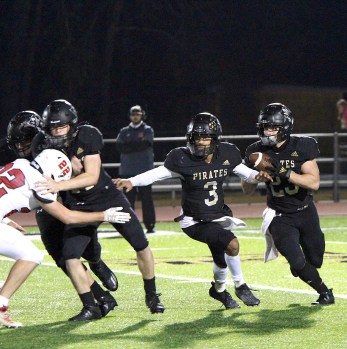 VIDOR – The Vidor Pirates fell to the Huffman Falcons 15-13 in a close and hard fought District 10-4A Division I game in Vidor Friday night.

The Pirate defense held the Falcons to 150 rushing yard and 77 total passing yards. The Falcons were just able to create the big plays when they needed them, and hold down the Pirates offense when it mattered most.

Huffman will now go home next week to face the Livingston Lions (7-2, 4-0) with the outright district title on the line. Livingston downed LC-M 18-6 Friday.

The Pirate offense was able to generate a lot of yards and have long drives, but their main issue was finishing those drives. The Falcons were able to clog up the holes as the drives went on and the Pirates weren’t able to produce points out of their long drives. The Pirates finished with 272 rushing yards with Jason Watson leading the way with 93 yards on 15 carries on the night. He had a big run of 45, longest for the Pirates this game.

Vidor struck first with a long 13-play drive controlled by the run game. A few running backs got the call for four to six yards a rush. After a tough drive and close call on a fourth down, the Pirates’ Colby Smith took a pitch around the outside to score and take the game’s first lead. The Pirates would fail on the two-point conversion but had a 6-0 lead with 42 seconds left in the first quarter.

The Falcons answered with a quick three-play drive and the quarterback taking control. Luke Thomas would call his own number from their own 39-yard line and out run the entire Vidor defense. Thomas went 61 yards for the touchdown, and after the PAT the Falcons led 7-6 with 8:50 left in the first half. Thomas finished with 119 yards on 15 carries.

The Falcons extended their lead with another scoring drive late into the third quarter. Thomas would connect on a couple passes to extend the drive. The big one being to Gunnar Gates for a 20-yard toss and red zone positioning. Thomas would call his own number and score from a yard out. They would convert the two point conversion with a pass from Thomas to Caleb Shannon to make the score 15-6 with just under four minutes left in the third quarter.

The Pirates answered back with a touchdown early in the fourth quarter. A long 14- play drive capped off with a tough run to score. Quinten Root found a big pass to Jason Watson to keep the drive alive early, as the Pirates would rack up the first downs this drive with five. A few running backs would contribute, but the final run was by Root, who scampered in from three yards out. After the PAT the Falcons led 15-13 with nine minutes left in the fourth quarter.

The Falcons would hang on to win a very close game on the road in what could be their toughest test so far this season. They were able to make a big stop with less than two minutes left with the Pirates driving in enemy territory.

The Pirates will hit the road next week to face the Lumberton Raiders.