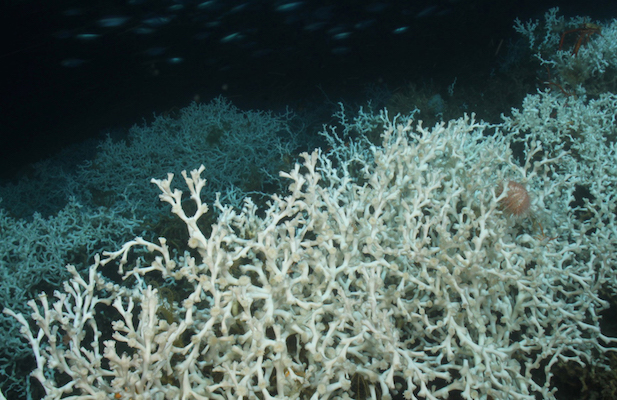 A dense aggregation of the deep-sea coral Lophelia pertusa at 500 meters depth in the northern Gulf of Mexico (credit: Lophelia II Reefs, Rigs, and Wrecks Expeditions, NOAA-OER and BOEM).

HOUSTON — Ancient coral hotspots in the Gulf of Mexico will be protected from damaging fishing gear, in a plan approved by federal officials.
The use of trawls, traps, anchors and longlines will be prohibited in most of the 21 protected areas. According to Holly Binns, director of The Pew Charitable Trusts’ marine life program, the proactive change will preserve ecosystems that provide food, shelter and breeding grounds for ocean life, ranging from sharks and crabs to fish species such as snapper and grouper. Binns said the coral hotspots are fragile, slow growing and also critical to long-term survival of other species. Once they’re damaged, however, they can take centuries to recover.
“This plan would identify about two dozen of these sites,” she said, “and in most of them prohibit the use of this damaging fishing gear in order to protect these very special coral hotspots.”
Federal approval of the plan creates 21 protected areas off the coasts of Texas, Louisiana, Alabama, Mississippi and Florida.
An extra benefit of the restoration plan is the development of better maps to locate coral reefs and other ecosystems. Tom Frazer, who chairs the Gulf of Mexico Fishery Management Council, said that’s important, because there’s a lot that’s unknown about the deepest parts of the ocean.
“These deep-sea coral habits, they’re poorly understood, but we do know that they’re very long-lived, they do provide ecological benefits,” he said, “and we want to make sure that they continue well into the future.”
Frazer said coral ecosystems also are natural disease fighters. Some hold properties that are producing treatments for medical conditions, including cancer. The plan, approved by the U.S. Department of Commerce, designates 21 sites totaling 484 square miles as Habitat Areas of Particular Concern.