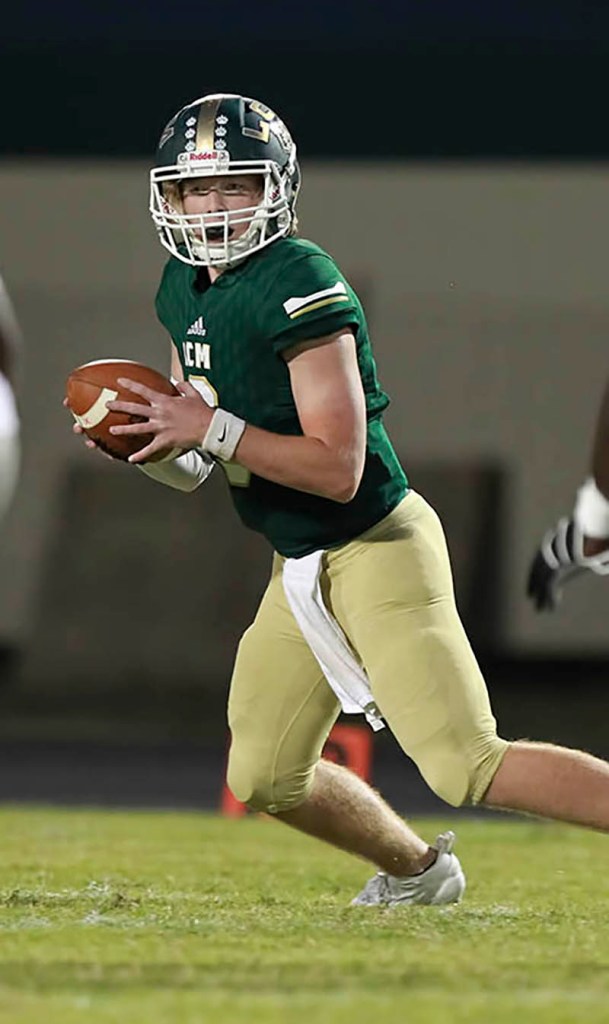 Mark Pachuca/Orange Leader LC-M quarterback Ashton Landry passed for a score and ran for another in the Bears 14-13 victory over Lumberton Friday night at Battlin' Bear Stadium.

LITTLE CYPRESS – Little-Cypress Mauriceville outlasted the Lumberton Raiders 14-13 in a District 10-4A Division I contest Friday night as they gained their first win of the season at Battlin’ Bear Stadium.

For the first half of the night, defense was the name of the game for both teams. The first half resulted in under 100 total yards for both LC-M (1-5, 1-2) and Lumberton (1-6, 0-3), and the game was still deadlocked at 0-0 after the third quarter. Things finally got rolling in the fourth though, and the action began.

An interception by LC-M’s Jermaine Woodson was the play that finally got the teams moving. The Bears were forced to punt after the turnover, and Lumberton set themselves up at LC-M’s 47-yard-line. Quarterback Drake Boykin rushed three times for 30 yards before scrambling for 20 to find the end zone for the first points of the game.

The Raiders attempted an onside kick, but things went horribly wrong when the ball slipped and only went one yard from the original spot. LC-M took over with great field position and finally got rolling on offense. Quarterback Ashton Landry showed off his connection with star receiver Brendon Pollock, sending him three passes for 46 yards and a touchdown to tie things up 7-7.

Landry finished 15-of-22 for 148 yards while Pollock hauled in eight receptions for 93 yards.

Lumberton took over from their own 30, but LCM’s defense came up huge to force a three-and-out, giving the Bears the ball back with 7:40 left in the game. Once again, Pollock made some great plays including a 12-yard catch and a 43-yard grab to set up a 1st and goal from the one-yard line. Landry kept the ball on a QB sneak and scored to give the Bears their first lead of the game, 14-7.

Lumberton took over hoping to respond with a score of their own, but they were picked off on their first play from scrimmage by Ken’teon Champine. With five minutes remaining, the Bears took the field hoping to run the clock down but were forced to throw on third-and-five. That pass was also intercepted at the 30 by Lumberton’s Tristan Kersh, giving the Raiders hope as time continued to run down.

Lumberton’s offense took the field one last time in desperate need of a score, and they quickly got to work. A pass to Kyle Marcantel went for 10 yards, and a dime to Gabe Williams went for 32 yards too. Their quarterback kept the pressure on and scored his second touchdown of the night on a three-yard rush.

Trailing 14-13 with only eight seconds left in the game, the Raiders were faced with a tough decision. Instead of attempting the PAT they chose to go for two, but their rushing attempt ultimately came up short to leave LCM on top 14-13 as time ran out.

As for the first three quarters of play, neither team was able to move the ball very effectively. Lumberton’s first possession took 14 plays but they failed to convert on fourth down, and LC-M was unable to convert on their first possession as well. Both defenses were tough, and there were only seven drives in the first half. Every one resulted in either a punt or failed fourth-down, so the special teams units stayed active almost all night. Even coming out of the half, neither team could get any kind of momentum and failed to drive downfield. Although the game did have a slow start, the defensive showcase from both sides tonight was quite impressive.

The Bears will hit the road next week to face the Livingston Lions while the Raiders head to Splendora.