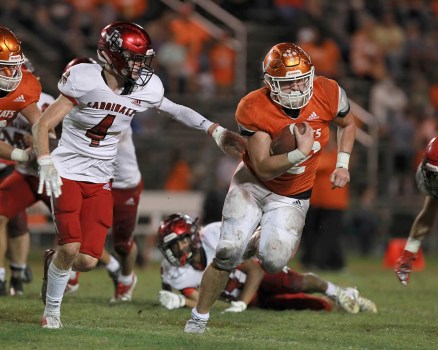 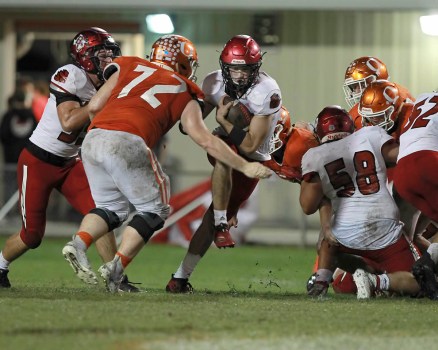 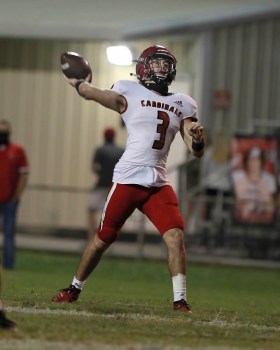 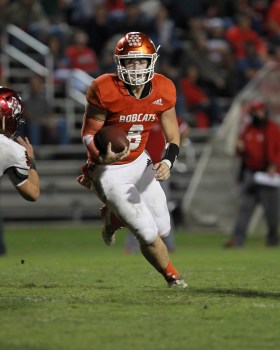 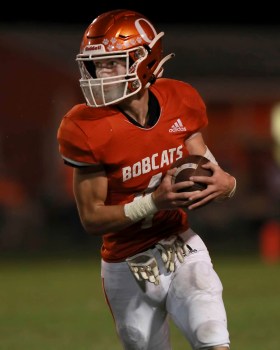 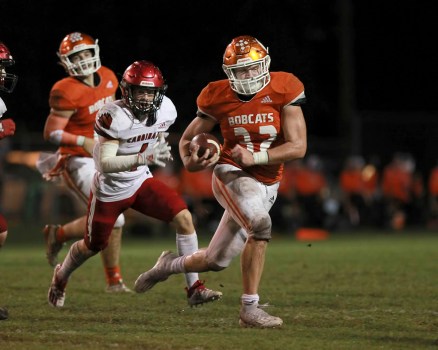 ORANGEFIELD – Utilizing a fierce defensive effort and those long, sustained offensive drives they are accustomed too, especially in the second half, the Orangefield Bobcats dominated the Bridge City Cardinals 22-0 in District 11-4A Division II action Friday night at Orangefield High School to take the Bayou Bowl.

Meanwhile, the Bobcats chewed up 264 total yards, all of it via the ground game.

Bobcat running back Cameron Dischler was a thorn in the Cardinals’ side as he zipped for 104 yards and two touchdowns on 11 carries.

Bobcat fullback Hunter Ashworth barreled his way to 68 yards on 16 totes. Bobcat quarterback Gunner Jones scooted for 44 yards on five carries, including a 29-yard TD gallop while Dwight Davis had 33 yards on seven totes and was good in the return game.

The Bobcats held the versatile Cardinal quarterback in check most of the night.

Oceguera completed 6-of-21 passes for 70 yards and had minus 4 yards rushing on nine carries and was sacked four times.

Cardinal back JimSharon Bearden earned 69 yards on 15 carries while JT Fielder, the leading receiver in receptions in the district, had four catches for 51 yards.

Leading 9-0 at the half, the Bobcats came out with a lot of energy in the second half as they navigated 75 yards in nine plays on the half’s first series. Dischler was the workhorse on the drive as he carried six times for 56 yards and broke off on runs of 23 and another one for 14. He capped off the march with a four-yard dart around the right end. The Cardinals stopped the two-point conversion run but the Bobcats led 15-0 with 8:04 in the third.

The Cardinals moved the ball well on their next series that started at their own 24. Oceguera teamed up with receiver Austin Richardson for a 24-yard gain to the Bobcat 39. However, three plays later Shearin picked off a Oceguera pass that went through a Cardinal receiver’s hands at the Bobcat 28 with 5:30 in the third.

The Cardinals moved from their own 25 all the way to the Bobcat 26 on a 13-play drive. Oceguera teamed up with Fielder on a 12-yard pass that got to the 26 but the Bobcats forced three straight incompletions after that to stop the drive with 8:07 left.

The Bobcats took the wind out of the Cardinals’ sails with a nine-play, 74-yard touchdown drive. Ashworth carried five times for 259 yards on the series and Jones finished it with a hard-earned 29-yard touchdown jaunt down the left sideline, pushing it to 22-0 with 4:02 left.

It was definitely a defensive slugfest in the first half as both defenses were on point as the Bobcats led 9-0 at intermission.

The Bobcats managed 92 yards, all on the ground, while the Cardinals had just 71 total yards in the first 24 minutes.

It was the Bobcats, however, that cashed in on an opportunity behind Cameron Dischler’s legs and the Bobcats added a field goal before the half after a Cardinal turnover.

The Cardinals got out of a hole midway through the first quarter as they got away from their own 2 after a nice 34-yard run by JimSharon Bearden that got all the way to the Cardinal 46. However, the Bobcat secondary rose up, forcing three straight incompletions.

After a nice punt return by Dwight Davis gave the Bobcats the ball at their own 49 with 3:56 in the first quarter, the Bobcats hit paydirt six plays later.

After picking up a pair of first downs Dischler got some nice blocks and then broke loose over the middle and scooted 29 yards for the touchdown. The extra-point kick was blocked but the Bobcats led 6-0 with 0:47 in the first quarter.

Both defense shut down two fourth down attempts in the middle of the field.

The Cardinal defense stopped Ashworth for a two-yard gain on fourth-and-3 from the Bobcat 49.

The Bobcat defense returned the favor on the next series, forcing two straight Oceguera incompletions, including a fourth-and-5 play from the Bobcat 46.

Orangefield defensive Shearin, who has been a ball-hawk this season, picked off a Oceguera pass at the BC 45 and returned it all the way back to the Cardinal 13 with 3:20 in the half.

The Cardinal defense rose up, allowing the Cardinals just three yards in three plays and Gunner Jones was able to drill a 26-yard field goal to put the Bobcats up 9-0 with 1:08 in the half.

Dischler led the Bobcats with 30 yards on two carries. Davis had 28 yards on six carries while Ashworth had 27 yards on eight carries.

Bearden rumbled for 55 yards on 10 carries for the Cardinals. Oceguera completed 2-of-10 passes for five yards and rushed for seven yards on four carries.

The Bobcats will travel to Hamshire-Fannett next week while the Cardinals return home to take on Liberty.