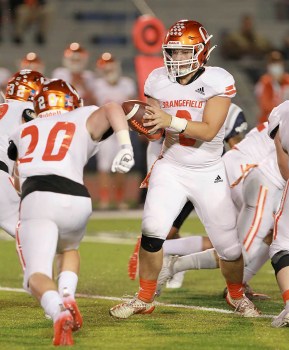 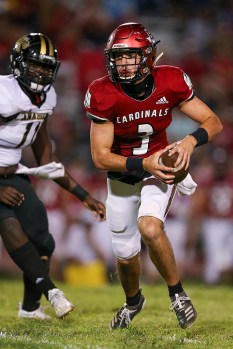 ORANGEFIELD – After a few years put off on the backburner, the “Bayou Bowl” between the Bridge City Cardinals and Orangefield Bobcats is back in business as the two Orange County squads will battle in District 11-4A Division II play Friday at Orangefield High School.

It’s been a few years since the two rivals have played, especially when the Bobcats moved down to the 3A ranks for a couple years.

Now that the Bobcats are back in 4A Division II and the Cardinals moved down to 4A Division II, the two squads will now meet with the game having major implications as far as the playoff race is concerned.

Both are coming off tough losses.

The Bobcat offense, averaging 245 yards a game, will look to get back on track this week against a Cardinal defense that allows 338 yards a game.

It’s no secret that the Bobcats would love to run the football and control the clock against the Cardinals.

Bobcat quarterback Gunner Jones has completed 10-of-29 passes for 106 yards with two TDs and two interceptions. He has also rushed for 95 yards and four TDs on 29 totes.

The Cardinal offense has moved the ball pretty well all season, averaging 337 yards a game and they will face a Bobcat defense that allows just 218 yards a contest.

Oceguera has completed 43-of-90 passes for 632 yards with seven TDs and three interceptions. He passed for 215 yards in the loss to Silsbee last week.

Cardinal JT Fielder leads the district in receptions with 17 catches for 173 yards and a score. Austin Richardson is a big-play threat with his eight catches for 227 yards and four TDs while Joey Murty has five grabs for 75 yards.

JimSharon Bearden is also featured in the Cardinal ground game and has 281 yards and two TDs on 59 carries.

With three games left on each team’s schedule, this game is important as far as trying to punch in a playoff ticket down the road.

The Cardinals will return home next week to host the Liberty Panthers while the Bobcats hit the road to face the Hamshire-Fannett Longhorns.