UPDATED: Wreck shuts down westbound I-10 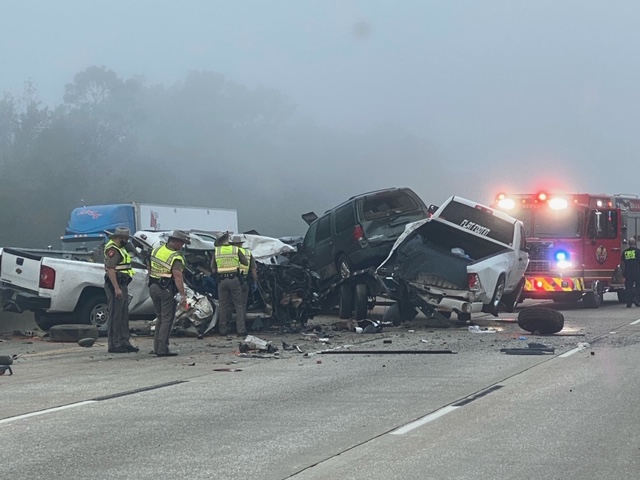 UPDATE: The Texas Department of Public Safety (DPS) can confirm that Jaylon Kurt Harrison, 21, of Broussard, Louisiana was pronounced deceased by Justice of the Peace Rodney Price following an early morning crash on Interstate 10 in Orange County.  Harrison was the front seat passenger in the Chevrolet pickup truck driven by Richard Thibeaux.

All information is preliminary as DPS Troopers continue to investigate this fatal crash.

Motorists are urged to use caution while traveling in the area and stay alert for stopped or slow moving traffic.

PRESS RELEASE — At approximately 5:50a.m., the Texas Department of Public Safety (DPS) responded to a multiple vehicle crash on Interstate 10 in Orange County. The crash occurred just beyond Doty Road.

The preliminary DPS crash investigation indicates that a 3/4-ton Dodge pickup truck towing a car hauler with three vehicles was traveling westbound on Interstate 10.  According to the driver of the Dodge, his vehicle experienced mechanical issues and was disabled partially in the left lane of traffic.  The driver exited the vehicle to work on the mechanical issue when the trailer portion of his vehicle was struck by a Chevrolet pickup truck.

The driver of the Dodge, 57-year-old Jose Soriano of Houston, was transported to a local hospital with serious injuries.

The driver of the Chevrolet, 46-year-old Richard Thibeaux of Louisiana, was transported to St. Elizabeth hospital with serious injuries.

The front passenger of the Chevrolet, a 21-year-old resident of Broussard, Louisiana, was pronounced deceased by Justice of the Peace Rodney Price at the scene.  His name will not be released until next of kin has been notified.

The rear passenger of the Chevrolet, also a resident of Louisiana, was not injured.

All westbound traffic lanes of Interstate 10, near Doty Road, remain closed. Motorists are urged to find an alternate travel route.

The fatal crash remains under investigation and there are no additional details available at this time.