Votes are pouring in 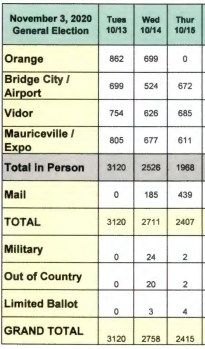 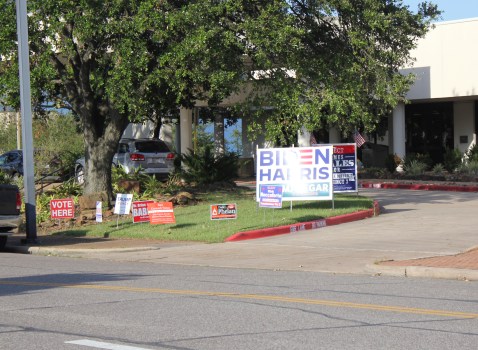 Dawn Burleigh/Orange Leader Political signs are out as early voting continues throughout Orange County. A high number of voters have turned out in the first three days of Early Voting.

On the first day of early voting, 3,120 persons stood in line to cast their ballot. Many reported they waited 45 minutes to an hour to vote.

One person said the hour went fast as she saw many people she knew while in line and enjoyed visiting with them.

On the second day of early voting, Military, Out of Country and Limited Ballots were turned in for a total of 47. The total number of ballots on the second day, including the afore mentioned, was 2,758.

Day three saw a total of 2,415 votes. It is also the day that zero votes were at the Orange City Library, one of the four locations in Orange County to vote.

The Orange Public Library was closed on Thursday due to a power outage from two lines running underground.

The highest number of votes at a location was at the Orange Public Library with 862 on the first day of early voting.

The early voting period was extended this year due to COVID-19 protocols.

On the ballots, voters will not only have the option to vote for the presidential election, but also local elections originally scheduled earlier this year but also postponed due to the pandemic.

Sample ballots can be found at https://www.co.orange.tx.us/departments/ElectionsAdministration/SampleBallots

Candidates in contested races are: