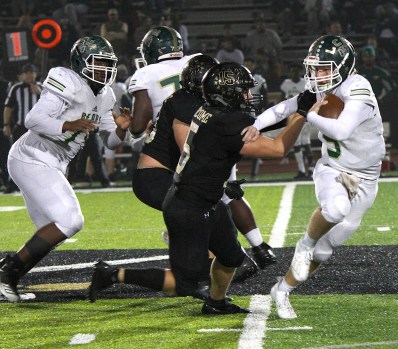 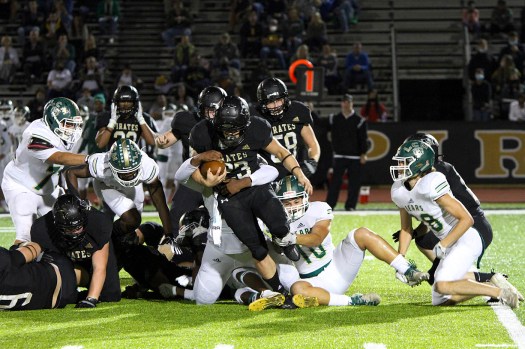 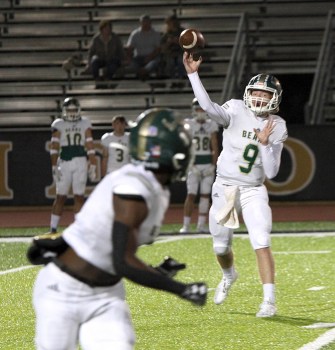 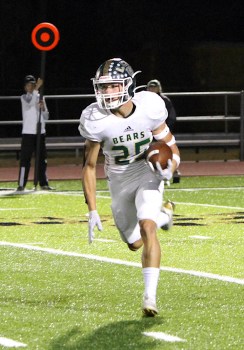 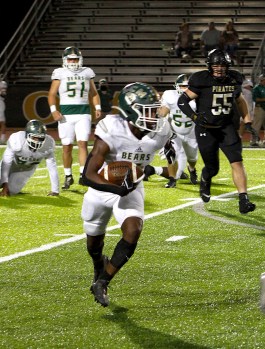 VIDOR – The Vidor Pirates celebrated Homecoming in style Friday night as they stormed past the Little Cypress-Mauriceville Battlin’ Bears 32-7 in District 10-4A Division I play at Pirate Stadium.

Offensively the Pirates were lead by Weston Sepulvado in the rushing department. He finished with 10 rushes for 107 yards with his longest being a 51-yard run. The Pirates offensive line made a massive impact on the outcome of this game. All night long they pushed the Bears back and back and completely controlled the line of scrimmage.

Defensively the Pirates were all over the Bears, allowing negative 14 yards on the ground, an astonishing number, and 134 yards total on the night.

The Pirates amassed 432 total yards, 317 via the ground game.

What the Bears could do was find yards in the air. Ashton Landry would go 17-of-23- with 149 yards. Brendon Pollock led all receivers with five catches for 43 yards.

Overall the Pirates had the Bears number all night on both sides of the ball and took a commanding lead in the second half and never looked back.

The Pirates struck first with a two-play touchdown drive, thanks to the air game. Quarterback Quinten Root caught the Bears defense off guard and found Trenton Conn for an 81-yard touchdown on the second play of the drive. Conn would outrun the Bears and gave the early lead to the Pirates, who led 7-0 with 10 minutes left in the first quarter.

The Pirates took a two-score lead after their run game found room thanks to great blocking. Sepulvado would find a hole on the third play of the drive, breaking a big run off for 51 yards. Root, who had 93 yards on 13 carries, would call his own number and find a few good runs around the outside, with his blockers running point. Root finally punched it in from five yards our for the touchdown. After the PAT went through, the Pirates led 14-0 with three minutes left in the first quarter.

Just before halftime, the Bears responded with their touchdown. Landry would lead a 17-play drive to cut the Pirate lead in half. Landry dropped back on five passes and complete them all, in crucial points in the drive. Landry connected with Pollock for 13 yards and a first down, and Nicholas Granger for a 10-yard first down catch extending the drive. When the Bears got inside the red zone, the run game took over and finished the drive off. Landry would take it in himself, after getting denied on his first push he rolled to the outside and dove across the line for the score. After the PAT went through the Pirates led 14-7 with 50 seconds in the first half left.

The Pirates held most of the first half, but the Bears made a late half push, hoping to have a shot at the lead in the second half.

Vidor opened the second half with a quick 1:45 drive to take a two score lead. Sepulvado broke a big 19-yard run to start. Root would go for 20 on the next run and Sepulvado punched it in from 10 yards out for the score. The Pirates went for a 2-point conversion but wouldn’t find itas they led 20-7 with 10:15 left in the third quarter.

The Pirates continued to build their lead early in the fourth quarter. After getting three or four yards a carry for a few first downs the Pirates found themselves crossing the 50-yard line quickly. Root took a run outside at the 31 yard and took it all the way to the house. After the PAT failed, the Pirates led 26-7 with eight minutes left in the game.

Vidor piled it on even more with another quick touchdown in the fourth quarter. Jason Watson was the only ball carrier on the drive. He had four carries for 44 yards, his longest being a 15-yard scamper. Watson punched it in from 10 yards out for the score. The two-point conversion was no good, but the Pirates led 32-7 with five minutes left in the game.

The Bears will return home next week to face Lumberton while the Pirates travel to Livingston.