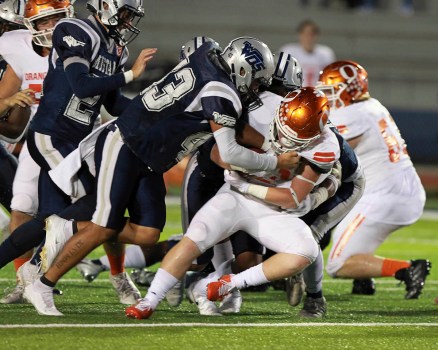 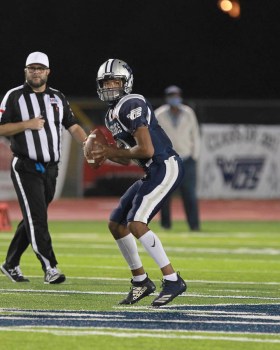 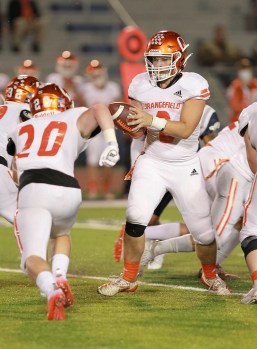 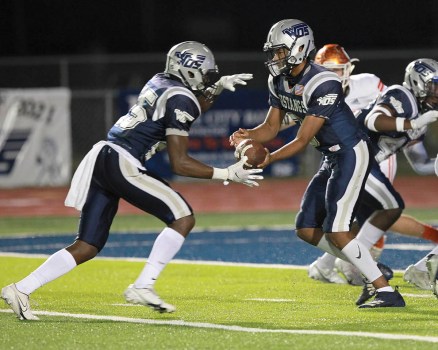 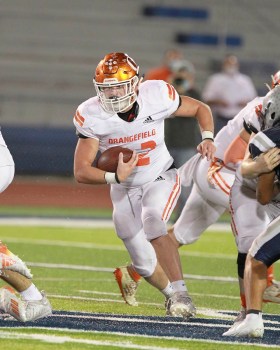 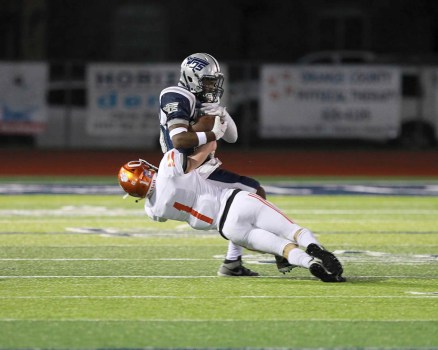 Terrell completed 15-of-21 passes for 267 yards and two touchdowns and rushed for two more.

Mustang receiver Jacob Dominguez hauled in three passes for 88 yards. Jalen Thompson had four catches for 64 yards and a score and Braden Gant had two catches for 39 yards and a TD.

Elijah Gales led the Mustang ground game with 66 yards on three carries while Jamaal Shaw had 60 yards on 10 totes.

Terrell had a magical first half as he completed 13-of-17 passes for 236 yards and passed for two scores and ran for two more.

The Mustangs outgained the Bobcats 314-28 in the first 24 minutes and did not allow Orangefield a first down as they went into the locker room with a 34-0 edge.

The first time they had the ball, the Mustangs went 64 yards in 10 plays to find the end zone.

Terrell hit receiver Jacob Dominguez on two passes for 41 yards on the march and Thompson hauled in a 33-yard pass that got to the 1. Three plays later Terrell scored on a one-yard keeper. The extra-point failed as WO-S led 6-0 with 6:08 in the first quarter.

The Mustangs put up four touchdowns in the second quarter.

Shaw got loose for an 18-yard run on the series and Terrell found Jubar Ross on a sharp pass to the Bobcat 18 for a 22-yard gain. Jailen Brown capped it with a 15-yard touchdown gallop up the middle and Angel Ibarra booted the extra-point.

The Mustangs went 51 yards in six plays to score again on their next possession.

Shaw busted loose for runs of 12 and 11 yards. Terrell connected with Braden Gant on a 18-yard dart over the middle that got to the Bobcat 10. After a loss of yards and a penalty, Terrell found Gant again, this time on a 21-yard touchdown pass over the middle, pushing it to 20-0 with 5:44 in the half.

Shaw had a nice 16-yard run and zipped down the field on a 29-yard pass from Terrell that got to the Bobcat 10. On the next play, Terrell took it around the right side for the keeper and the 10-yard score.

Mustang defensive back Jadon Jones picked off a Gunner Jones pass at the Mustang 37 with 1:29 in the half.

Dominguez had three catches for 88 yards in the half. Thompson had three receptions for 53 yards and Gant had two catches for 39 yards. Shaw had 60 yards on 10 carries.

The Mustangs scored quick to start the second half when Tyrone Brown scooped up a fumble and returned it 37 yards for a touchdown with 9:11 in the third quarter.

WO-S made it 48-0 with a five-play, 93-yard scoring march that was sparked by a 64-yard dart by Gales. Jayson Zeigler, Jr. capped it off with a 16-yard touchdown run around the left side with 3:41 in the third.

The Bobcats then put together their best drive of the night, zipping 69-yards in six plays.

Ashworth broke loose on a 32-yard run that got to the Mustang 26. Garrison Hughes had a nice 12-yard gallop to the Mustang 14 and two plays later Jones found Davis with a superb pass over the middle for a 13-yard score with 0:21 in the third.

The Mustangs will hit the road next week to face Liberty while the Bobcats return home to take on Bridge City.