New report: Illegal air pollution in Texas has doubled since 2015 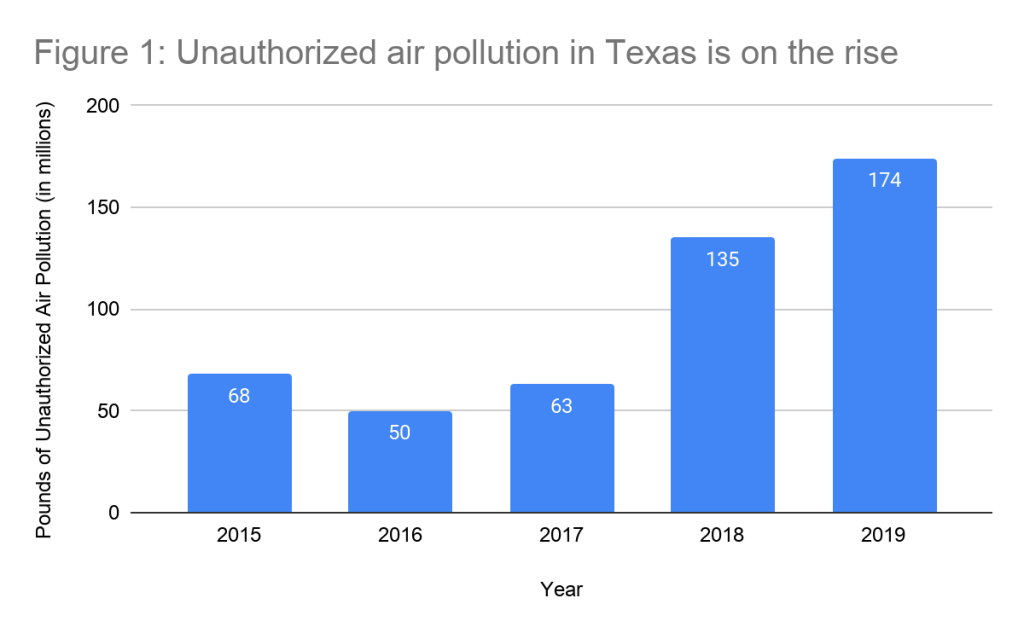 AUSTIN, Texas –  Illegal air pollution from Texas industrial facilities more than doubled under the Trump administration, rising to 174 million pounds in 2019, according to a new report by Environment Texas Research and Policy Center. The group pointed to lax EPA enforcement and environmental rollbacks as contributing to the increase.

“The EPA is cutting protection left and right, and Texans are paying the price,” said Catherine Fraser, clean air associate with Environment Texas Research and Policy Center. “Every single day in 2019, an industrial facility somewhere in Texas illegally polluted our air, and that’s maddening. We need our federal and state leaders to hold polluters accountable and protect our air and our health.”

Unauthorized carbon dioxide pollution, as discussed in the report, is a relatively new phenomenon as facilities start to get greenhouse gas permits. For example, the Beaumont Gas to Gasoline Plant only opened in 2018 and is responsible for the vast majority of total unauthorized carbon dioxide emissions. However, even when Beaumont Gas to Gasoline Plant is excluded, air pollution increased 50% from 2015 and 100% from 2016.

Some of the emissions came during high profile chemical disasters, including the one at the ITC Terminals facility, when black smoke plumed over Houston for days after a fire in March. Another occurred at the TPC Port Neches facility near Beaumont, which forced the evacuation of thousands the day before Thanksgiving.

“Lack of oversight of industry and nonexistent enforcement of pollution laws needlessly places fenceline communities at risk,” said John Beard, Jr., chair of the Port Arthur Community Action Network. “Their health compromised by years of exposure, these majority black and brown residents are highly susceptible to respiratory health issues. Add COVID-19 to the mix, and you amplify a pandemic that is already crippling these communities. Given increased industrial buildout, the need for strong, forceful action has never been greater to protect health and save lives.”

In the Midland area, which is the epicenter of the Permian Basin oil drilling boom, at least one unauthorized air pollution event happened every single day in 2019. The Houston and Corpus Christi areas, both home to numerous refineries and chemical plants, had illegal air pollution events on 357 and 351 calendar days out of the year, respectively.

Since 2017, the U.S. Environmental Protection Agency (EPA) has gutted more than a dozen air quality safeguards for industrial facilities, including weakening air pollution monitoring requirements for refineries and rolling back safety standards that were adopted after a chemical plant exploded in Texas in 2013. The agency has also initiated, on average, 38 percent fewer enforcement actions in Texas, and opened loopholes for polluters, including eliminating reporting and monitoring requirements during the COVID-19 pandemic. In Texas, EPA levied 15 clean air enforcement actions on average each year from 2017 to 2019, compared with 24 from 2014 to 2016.

The EPA shares joint regulatory oversight of Texas industrial facilities with the Texas Commission on Environmental Quality (TCEQ), whose executive director admitted last month that enforcement efforts have “been lagging.”

“In addition to rolling back air quality protections and slowing down its own enforcement, EPA gave Texas a free pass to pollute, which TCEQ used to waive penalties for 97 percent of facilities that self-reported violations,” said Fraser, referring to the EPA’s reinstatement of a policy which provides polluters an “affirmative defense” from penalties if they meet certain criteria, an exemption widely abused by industry.

In contrast to the EPA’s rollbacks, and in acknowledgement of the agency’s failures to hold polluters accountable, the TCEQ has proposed modest improvements to the agency’s penalty policy.

“I never thought I’d see the day where the state of Texas is more aggressive with polluters than the federal government is, but here we are,” Fraser concluded.

The report calls on EPA to eliminate the affirmative defense loophole and step up enforcement actions against violators.