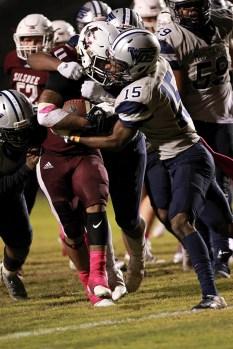 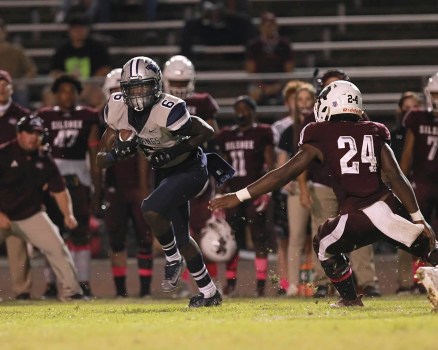 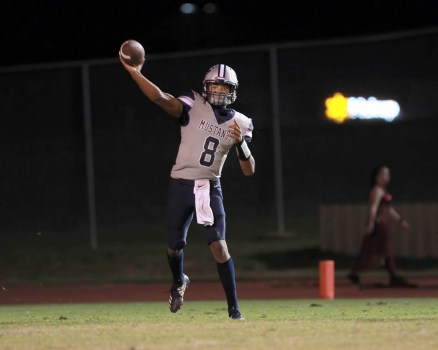 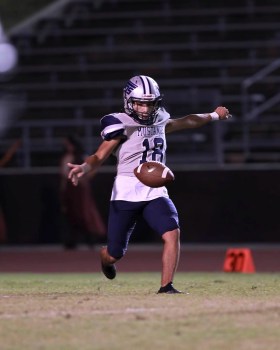 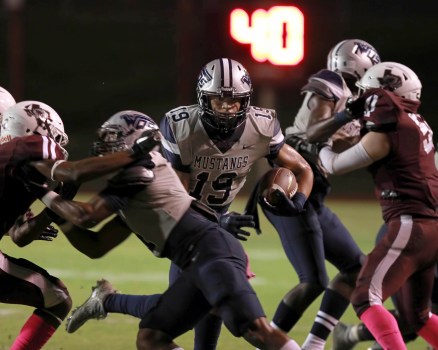 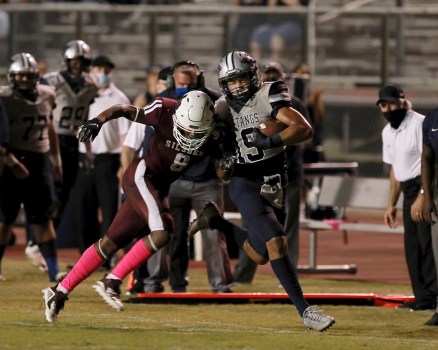 SILSBEE – Blowing through Silsbee like a train in the night, the West Orange-Stark Mustangs battered the Tigers 36-6 in District 11-4A Division II action at Tiger Field Saturday night.

The Mustangs (4-0, 3-0) totally dominated the Tigers (3-2, 2-1) throughout, limiting them to a mere 133 total yards of offense, 41 of it coming off an amazing touchdown catch by Silsbee wideout Camron Wilson, but that is all the Tigers could scratch.

The Mustangs held the Tigers to just 85 rushing yards on 44 carries with most of those few yards coming late.

In a “chippy game” that always seems to happen when the two getting together as a slew of personal foul penalties were called throughout the night, the Mustangs totaled 368 yards, 225 coming in the first half.

Mustang quarterback Jerren Terrell completed 8-of-23 passes for 176 yards and three touchdowns. Receiver Jalen Thompson had three catches for 84 yards and a pair of scores. Jailen Brown had two catches for 44 yards and a score while Jacob Dominguez had two receptions for 43 yards.

Jayson Zeigler, Jr. led the Mustangs with 90 yards on six carries while Jamaal Shaw had 83 yards on seven totes as both scored on runs. WO-S had 192 yards on 23 rushes.

The Mustangs broke it open on the first snap from scrimmage in the second half as Shaw went off left tackle and bolted 54 yards for a touchdown, giving the Mustangs a 29-6 edge with 11:44 in the third.

WO-S kept adding to the Tiger misery on their next series when Terrell found an absolutely wide-open Thompson along the left side for a 48-yard touchdown toss, making it 36-6 with 9:17 in the third.

WO-S snared a 22-6 lead by halftime as the Mustangs shook off seven penalties for 75 yards. They finished with 12 flags for 120 yards.

The Mustangs put together a six-play, 55-yard scoring drive late in the first quarter.

Zeigler, Jr. set the tone with a 31-yard gallop down the left sideline that got to the Tiger 23. Two plays later Terrell had a hard-earned 10-yard quarterback keeper to the Tiger 6 and Zeigler grabbed the honors two plays later, scoring on a keeper, going three yards off left tackle for a three-yard score. The point-after snap was bad but the Mustangs snared a 6-0 lead with 3:12 in the first quarter.

The Tigers answered with a five-play, 72-yard touchdown march.

Arline and Raymond Baltrip combined for 21 yards on two carries and Foster hooked up with receiver Camron Wilson on a 41-yard bomb down the right sideline. Wilson had great concentration to make a tremendous leaping catch and fell in the end zone for the score. However, the extra-point kick failed as the Tigers tied the game 6-6 with 10 minutes in the half.

After a great punt by Mustang Angel Ibarra and a great safe of the ball before it went into the end zone by Artavious Samuel, the Tigers set up shop at their own 2 with 7:01 in the half. Silsbee eventually got to their own 13 but after a couple rushing losses, Mustang defensive lineman Carmello Jones sacked Foster for a 10-yard loss and a safety to put the Mustangs up 8-6 with 4:41 in the half.

The Mustangs were able to put together a superb seven-play, 66-yard scoring drive late in the half.

Terrell hooked up with receiver Jacob Dominguez on a nice 21-yard completion to the Tiger 49. Running back Jamaal Shaw broke loose on a 22-yard dart down the right side that got to the Silsbee 32. Terrell then completed a quick out to speedy receiver Thompson and Thompson did the rest, getting a good block and sprinting 32 yards for the score. Ibarra booted the extra-point, making it 15-6 Mustangs with 2:44 in the half.

WO-S cashed in on a Silsbee miscue to score right before the half ended.

The Tigers had a bad punt snap with 0:44 left and the Mustangs took over at the Silsbee 19. Two plays later Terrell threw a dart to receiver Brown over the middle for a 15-yard touchdown, pushing it to 22-6 with 0:36 in the half.

The Mustangs outgained the Tigers 225-58 in the half.

Terrell completed 5-of-14 passes for 99 yards in the first 24 minutes with Dominguez catching two passes for 43 yards. Zeigler, Jr. had 90 yards on six carries while Shaw had 28 yards on four totes.

The Tigers mustered just 17 yards on 19 carries in the half with the Mustangs holding Arline to 26 yards on 12 carries. Foster was just 1-of-6 for 41 yards, thanks to Wilson’s electric touchdown grab.

WO-S drove from its own 47 to the Tiger 24 on their first series but the drive stalled.

The Mustangs saw a 47-yard touchdown toss down the left sideline from Terrell to Jalen Thompson get waved off by a holding penalty.

Zeigler, Jr. broke off a 30-yard run to the Tiger 27. However, the Tiger defense rose up and stopped WO-S on fourth down with 7:21 in the first quarter.

The Mustangs had another drive stall at the Tiger 28 with 11:56 in the half.

The Mustangs return home Friday to play host to the Orangefield Bobcats while Silsbee ventures to Bridge City to take on the Cardinals.