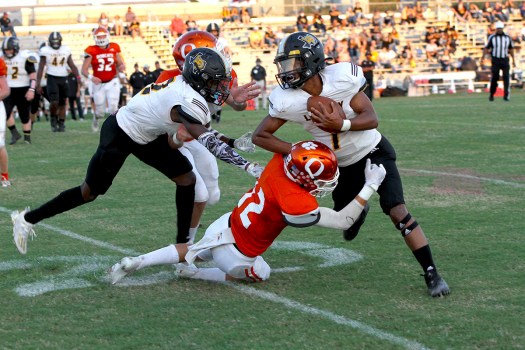 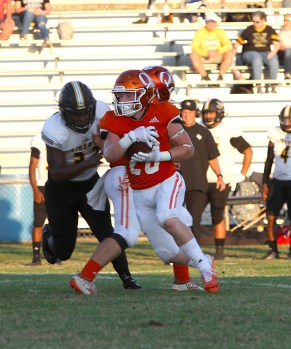 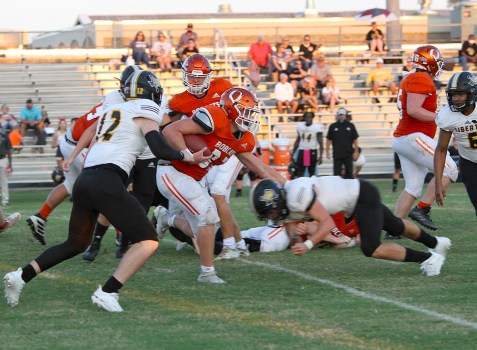 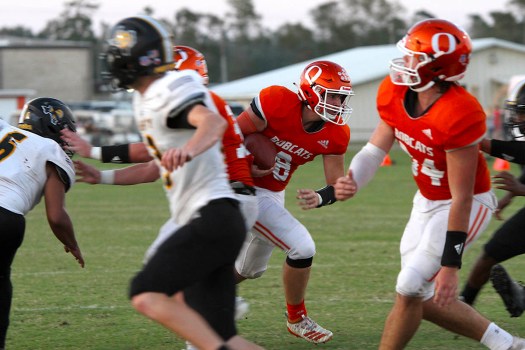 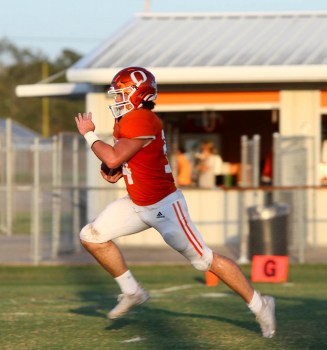 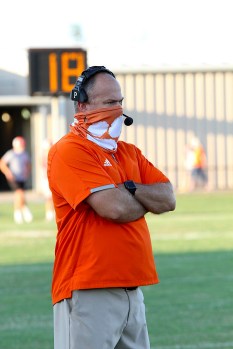 A battle of defenses and gritty running styles clashed for a very close game through and through.

The Bobcats (2-2, 1-1) operate mainly through the run game, and their leading rusher this game was Hunter Ashworth. Ashworth is the work horse of this backfield, getting the majority of his carries between the tackles, a real gritty runner who punishes defenses for trying to tackle him. He finished with 80 yards on 19 carries.

Overall this game was decided on the defensive side of the ball, and the Bobcats did a great job cutting drives short against the Panthers (3-3, 0-3).

The Bobcats secured the win with a big interception from Tyler Shearin that stopped a Panthers drive that was getting close to a touchdown. The Bobcat defense has proven time and again that they are a tough nut to crack for opposing teams.

Orangefield stopped the Panthers on their first drive and got started deep in their own territory.

An array of running backs took carries over the course of the drive, Ashworth led the way with 27 yards and a few first down carries. On the Panthers 28 the Bobcats took a chance over top with a pass from Jones to Mason Sampson for 28 yards and a touchdown to take an early lead. After the PAT the Bobcats led 7-0 with 46 seconds left in the first quarter.

The Panthers answered after the Bobcats fumbled the ball on offense, giving them prime positioning for a quick score. Off a screen pass from Kaden Nolan, Vincent Harris wrapped around the backside of the play to find the end zone from 29 yards out. After the PAT was no good, the Bobcats held a one-point lead at 7-6 over the Panthers with four minutes left in the half.

With just a couple minutes remaining, the Bobcats had a great kickoff return from Tyler Washington, who took a backwards pitch and took off all the way to the opposing 23-yard line, setting up the offense to score just before halftime. Ashworth would start the drive with a few hard carries as usual, and was capped off by Jones punching it in from the one yard line. The PAT would go through and the Bobcats took a 14-6 lead with 20 seconds left in the half.

Neither team would find the end zone in the third quarter. Both defenses came out rejuvenated with energy and stopped the opposing offenses dead in their tracks a few times in the quarter. The Panthers did drive into Bobcat territory but the Bobcats were able to hold them up and force a turnover on downs.

After a clutch interception by Shearin in the final minutes, the Bobcats hung on to win against the Panthers in a hard fought victory.

The Bobcats finished with 172 total yards while the Panthers had 193.

Nolan passed for 86 yards for the Panthers with Harris catching three passes for 40 yards. Alijah Terrell led the Liberty ground attack with 38 yards.

The Bobcats will make a short trip to West Orange-Stark Friday to take on the Mustangs.