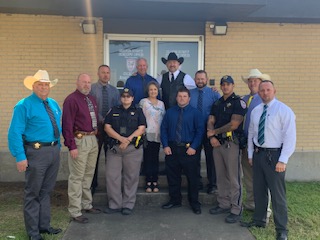 The Orange County Sheriff’s Office, along with Sheriff Mooney, would like to announce the re-opening of the Sheriff’s Office Substation. The new substation is located next door to the Offices of the Honorable Justice of the Peace Pct. 4 Rodney Price, Constable Pct. 4 Matt Ortego, and Commissioner Robert Viator which is located at 190 Camp Street in Vidor, Texas. The office number is 409-769-6391.

In 2017, Hurricane Harvey flooded our area and damaged the buildings used by the Sheriff’s Office for operations on the West side of the county. Upon taking office Sheriff Mooney made a commitment to the citizens of Orange County to reopen this office as soon as possible. Sheriff Mooney and staff have worked hard to see this pledge become a reality so we may better serve the citizens of Orange County.

On Thursday, Sheriff Mooney officially opened the fully operational office and kept his pledge to our community. The substation will have five Detectives, a patrol office, and an administration assistant. Lieutenant Joey Jacobs will be overseeing the day to day operations and investigative responsibilities for the Sheriff’s Office. Lt. Jacobs is a twenty-four year veteran of law enforcement and has been with the Orange County Sheriff’s Office for the last twenty-one years. Lt. Jacobs, Detective Chris Pearson, Detective Donathan Warner, Detective Kevin Norton, and Detective Morgan Downs look forward to serving the needs of the citizens of Orange County.

Sheriff Mooney stated, “Having this office opened back up will be beneficial to our citizens as well as the Detectives who serve them.”

Sheriff Mooney also stated, “We look forward to working with the other agencies in the area to meet the needs of Orange County.”

Sheriff Mooney has a motto, “Acta Non Verba,” which translates “Actions Not Words.”