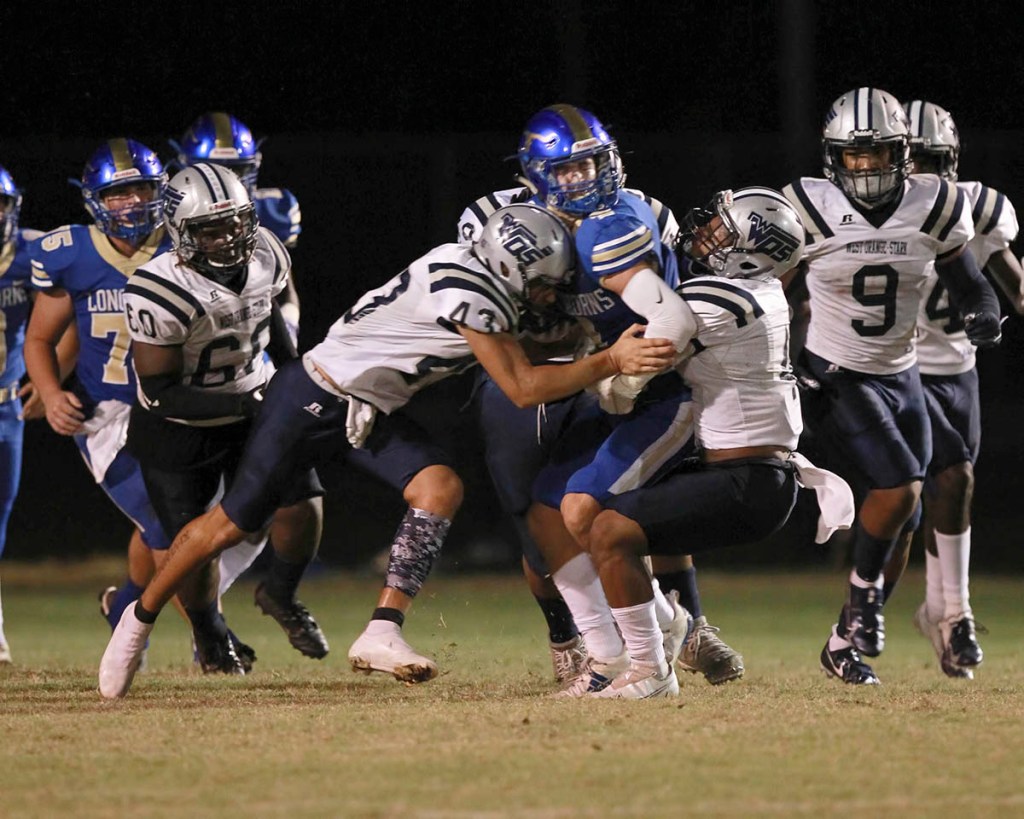 Mark Pachuca/Orange Leader WO-S defenders corral a Hamshire-Fannett back in their first District 11-4A game.

WEST ORANGE – Long-time rivals will hook up once again as the West Orange-Stark Mustangs and the Silsbee Tigers will battle again Thursday evening with possible District 11-4A Division II title hopes on the line.

The WOS Varsity Football Game at Silsbee has been changed to Thursday, October 8th at 6:00pm. Tickets now will be on sale in the Athletic Office today and tomorrow. There are 1200 tickets available for this game and there is a limit of 4 tickets per individual. Ticket hours are: Wednesday, October 7th – 1:00-3:00pm;  Thursday, October 8th – 9:00-12:00pm ONLY

One Ticket price: $5 pre-sale and at the gate

The Mustangs have been rolling along at a rapid pace this season, outscoring opponents 154-14, including a 47-7 thumping of Hardin-Jefferson in 11-4A play last week.

The Mustangs are churning out a district-leading 445 yards a game on offense and also has the best defense in the loop, allowing just 115 yards a game.

The Tigers are producing 260 yards a game, last in the district, and are allowing 241 yards a game.

Silsbee has been impressive on the defensive side in their two district wins, defeating Orangefield 14-6 and Liberty 14-7.

Raymond Foster and Mason Brisbane have split time at quarterback for the Tigers. Foster, who has started at times for three seasons, has completed 18-of-40 passes for 158 yards and two touchdowns while Brisbane is 9-of-21 for 118 yards and three TDs.

Malik Jones powers the Tigers’ ground game with 233 yards and four TDs on 23 carries. Marquis Dodd has roamed for 190 yards and a TD on 27 carries while Antonis Arline has 34 carries for 133 yards.

Quincy Kelly leads Silsbee with 11 catches for 95 yards and two TDs. Raymond Baltrip has six grabs for 73 yards and a score.

Mustang quarterback Jerren Terrell has had a super senior campaign thus far as he has completed 32-of-61 passes for 589 yards and seven TDs with no interceptions.

He has a pair of big receiving threats in Jayson Zeigler, Jr, who has nine catches for 142 yards and Jalen Thompson, who has hauled down eight receptions for 217 yards and four TDs.

Junior tailback Elijah Gales is having another tremendous season and has zipped for 336 yards and four TDs on just 25 carries, averaging 13.4 yards a tote. He has also got plenty of rests late in games due to the Mustangs’ rolling up on their opponents. He also has six receptions for 97 yards and a TD. Jamaal Shaw had over 90 yards in the romp over Hardin-Jefferson and now has 138 yards and a TD on 18 carries.

The Mustangs also have an excellent weapon in kicker Angel Ibarra, who has booted 20 extra-points and has converted four field goals.

The Mustangs will return home next week to take on Orangefield while the Tigers venture to Bridge City to face the Cardinals.