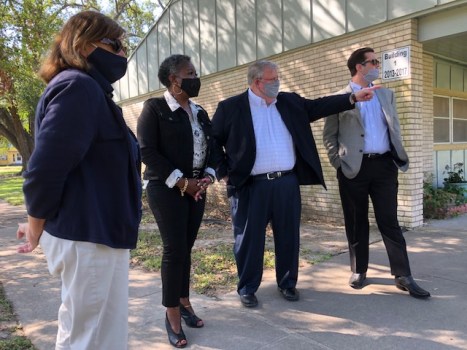 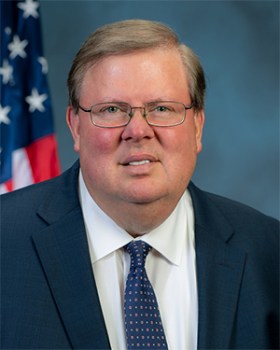 “Originally, we planned to be here two weeks ago, but we were unsure of which direction the storm Sally would take,” Montgomery said.

He said he was gracious to be in to able to spend time in Orange.

“I am from Texas, growing up in Houston,” Montgomery said.

While in Orange, he said there was some HUD locations with tarps and the Housing Authority of Orange was waiting on adjusters for the next move.

“Considering the storm, there was minimal damages,” Montgomery said. “Two units are uninhabitable.”

His next stop was in Lake Charles to see the devastation there.

“Lake Charles had significant damages,” Montgomery said. “It is some of the worse I have ever seen.”

One issue he said was uncovered while visiting Orange was a drainage issue, he said.

“There is a mitigation program which helps with more money up front to help prepare for a storm,” Montgomery said. “A lot of that will go to Houston but we will do what we can and come back on another trip.”

Montgomery was confirmed as Deputy Secretary of the U.S. Department of Housing and Urban Development on May 12, 2020. Through this role, he manages the day-to-day operations of the agency and advises and assists the Secretary in leading the Department’s nearly 8,000 employees.

Prior to assuming the role of Deputy Secretary, Brian Montgomery served as Federal Housing Commissioner. Nominated by President Trump in September 2017, his confirmation marks the first time an individual has served as head of the Federal Housing Administration (FHA) twice, and under three different Administrations. As Commissioner, he managed FHA’s more than $1.4 trillion mortgage insurance portfolio, which includes its Single Family, Multifamily, and Health Care programs. As Assistant Secretary for Housing, he has overseen HUD’s Project-based Section 8 rental assistance housing program, the Office of Housing Counseling, and HUD’s Manufactured Housing Program.

From January 2003 until April 2005, Montgomery served in the Executive Office of the President as Deputy Assistant to the President and Cabinet Secretary. In this role, he led the White House’s internal working group to monitor all facets of the Space Shuttle Columbia accident investigation for which he was awarded the NASA Exceptional Service Medal. Montgomery also served as Deputy Assistant to the President and Director of Presidential Advance from January 2001 until January 2003. During his time as Director of Presidential Advance he traveled extensively with President Bush, including on September 11, 2001, according to his bio.

The funds have to cover all 50 states as well as territories and properties of the United States of America.

“All the funds are supplemental funding,” Montgomery said. “Congress looks at the gaps and then fills the gaps.”

The funds are also used for long term projects such as infrastructure and electrical.