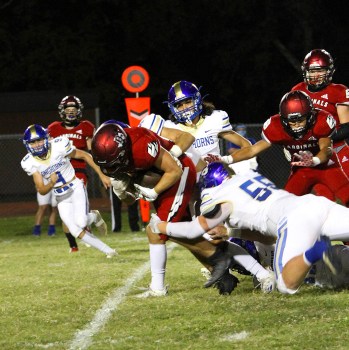 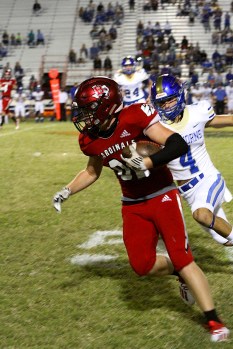 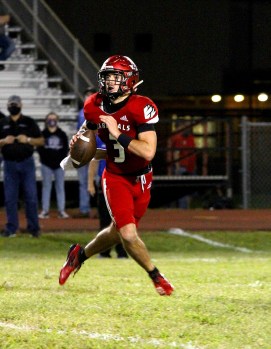 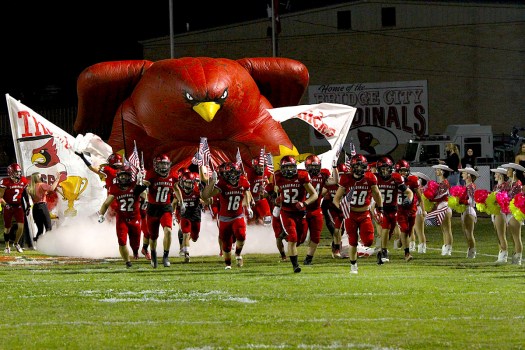 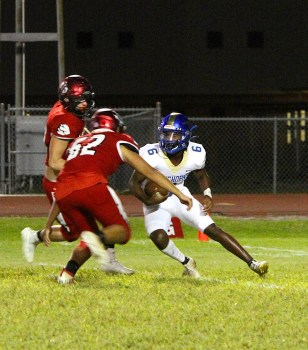 BRIDGE CITY – In an exciting ball game, Bridge City took down Hamshire-Fannett by a score of 27-20 in Friday night’s District 11-4A Division II matchup.

The Longhorns (2-3, 0-2) offense got off to a hot start on the game’s opening drive, opening things up with a 72-yard drive downfield. Just six minutes into first quarter, Kheagian Heckaman put them on the board with a touchdown run, and Hamshire-Fannett led 7-0.

Bridge City (1-1, 1-0) would return the kick to their own 24. On their first drive of the game Bridge City made sure to establish the ground game. Quarterback Ethan Oceguera would rack up nearly 40 rushing yards before taking it in for a score from four yards out, tying the game at 7-7 following the extra point.

Hamshire-Fannett got the ball back at their own 24, but a fumble and a personal foul moved them back to the 14. A big sack on 3rd down by Cardinal Cody Howard forced the Longhorns to punt, and BC got the ball going into the second quarter. Unfortunately, BC went three-and-out.

With 8:30 remaining in the second quarter Hamshire-Fannett’s quarterback D’onte Zeno dropped back to pass but threw a pick-six to BC’s Harrison Gauthier on a 30-yard return, extending the Cardinals’ lead to 14-7. After another rough possession for the Longhorns offense, Bridge City once again got the ball back.

The Cardinals pushed the ball downfield thanks to a few short rushes, and converted a huge third-and-long on a 16 yard pass to JT Fielder from Oceguera. With just 51 seconds remaining in the second quarter, the Cardinals would score yet again on a 23-yarder when receiver Austin Richardson made a leaping grab of a Oceguera toss in the end zone. By the end of the first half, Bridge City held onto a strong 21-7 lead.

After their halftime homecoming festivities concluded, the Cardinals got the ball but were forced to punt following a three-and-out. However, the Longhorns’ return man fumbled on the play and it was recovered by Bridge City’s Julian Dillow at the 26 yard-line.

The Cardinals took advantage of the great field position but wound up settling for a field goal by Oscar Carranza from 37 yards out, extending their lead to 24-7. On the very first play of Hamshire-Fannett’s next drive, BC’s Austin Richardson continued his productive night and added an interception to his stat sheet.

In spite of the interception, Bridge City punted once again to give the Longhorns possession late in the third quarter. A long 50-yard rush set them up nearly in the red zone, and Jordan Joiner rushed twice for 21 yards and a touchdown. Despite the touchdown, Hamshire-Fannett missed the extra point to leave them trailing 24-13.

Bridge City’s offense took the field once more, orchestrating a long drive downfield to start the fourth quarter. Even though they were forced to punt, the Cardinals maintained possession after the returned fumbled the ball. Having taken nearly seven minutes off the clock, Carranza hit his second field goal of the night and pushed the Cardinal’s lead up to 27-13.

Time was running out for the Longhorns to stay in it, and they were definitely feeling the pressure. After just three plays on offense, they threw their third interception of the night to Deegan King, giving the Cardinals total control with 5:30 left in the game.

Bridge City almost sealed the game off completely, as JS Bearden found the end zone on a beautiful 68-yard touchdown rush. Unfortunately for the Cards, the play was called back due to a holding penalty and they punted right after.

As time continued to tick down in the last two minutes, Hamshire-Fannett was actually able to move the ball all the way down and score on a Heckaman three-yard touchdown run with just 47 seconds left in the game, but they couldn’t recover their onside kick attempt, leaving them down 27-20. In the final seconds, Bridge City would kneel the ball and secure their first win of the year.

A win on homecoming night is always a sweet victory, and Bridge City should feel great about moving on to 1-0 in District 11-4A DII. They will look ahead to a road game against Hardin-Jefferson next week. Meanwhile Hamshire-Fannett falls to 0-2 in the district standings and will surely make some big changes during their upcoming bye week.

The Cardinals will hit the road next when they travel to Sour Lake to take on Hardin-Jefferson.