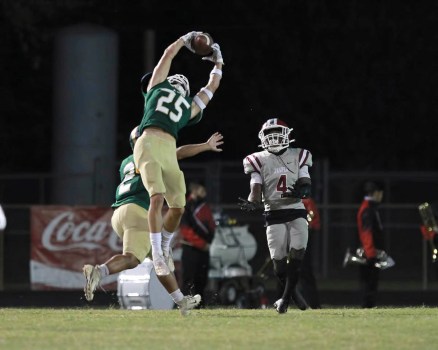 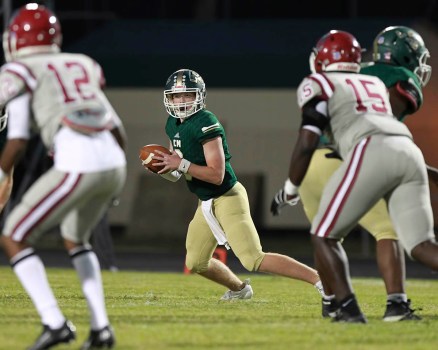 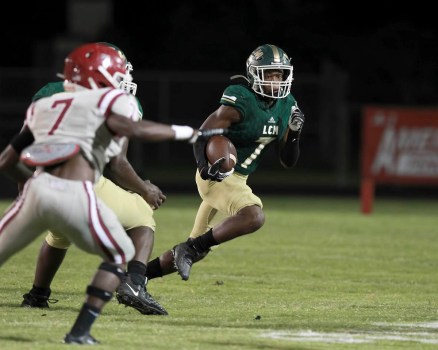 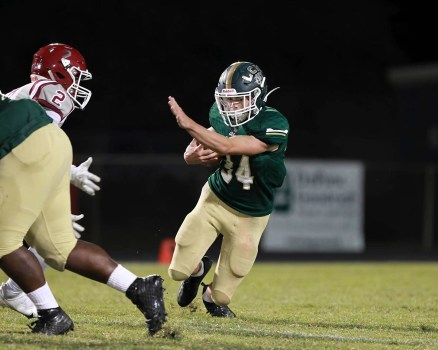 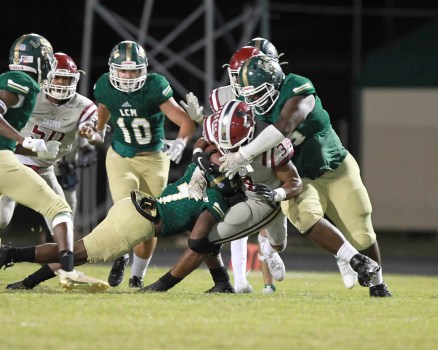 LITTLE CYPRESS – Using the big-play capabilities of backs Carl Limbrick and Andre Thomas and also cashing in on a couple Little Cypress-Mauriceville turnovers in the first half, the Jasper Bulldogs toppled the Battlin’ Bears 35-0 in the home opener for LC-M Friday night as both teams wrapped up non-district play.

Limbrick led the Bulldogs (4-0) as the burly fullback rumbled for 181 yards on 16 carries and two touchdowns, including a 92-yard gallop.

Thomas cut loose for 141 yards on just eight totes and scored on a pair of long runs and had two picks in the first half on defense that set up both of his scores.

LC-M quarterback Ashton Landry completed 12-of-24 passes for 101 yards. Receiver Brendon Pollock hauled down eight receptions for 75 yards. Bear back Andy McDow had 11 carries for 47 yards while Landry had 22 yards on nine totes.

The Bulldogs capitalized on two of three Bear turnovers in the first half to snag a 14-0 edge by intermission, as they got two long touchdown bursts from tailback Andre Thomas, who also had a pair of interceptions in the half as well.

Thomas picked off Landry at the Jasper 36 on the first play of the game.

The Bulldogs found paydirt eight plays later when Thomas bolted around the left end on his way to a 34-yard touchdown gallop. Kicker Ayden Garcia booted the extra-point to give the Bulldogs the 7-0 edge with 8:40 left in the first quarter.

The Bears came up with a 14-play, 53-yard drive on the ensuing possession but they came away empty-handed.

Landry had a 17-yard pass to Carson Peet and a 11-yard dart to Brendon Pollock and Landry also had a 13-yard keeper on the drive but the march stalled at the Jasper 25 as the Bulldogs forced an incompletion on fourth down.

The Bears coughed up the ball on a fumble at their own 23 with 11:15 in the half but the LC-M defense stood tall, halting Adams on a keeper on a fourth-and-seven play from the 20.

Thomas was a thorn in the Bears’ side again late in the second quarter as he picked off a Landry pass at the Bear 39. Two plays later Thomas found paydirt again as he zipped 33 yards for his second score on a misdirection handoff, putting the Bulldogs up 14-0 with 4:49 in the half.

LC-M’s Peet picked off an Adams’ pass at the Bear 15 on the last play of the first half.

The Bulldogs outgained the Bears 186-69 in the half.

Thomas had 88 yards on seven carries while Limbrick bruised his way to 61 yards on 11 totes. Adams completed 6-of-10 passes for 20 yards.

Landry completed 6-of-12 passes for 42 yards in the first 24 minutes for the Bears. Pollock had three catches for 19 yards while Peet had two receptions for 20 yards. Andy McDow led the Bear ground game with 13 yards on six carries.

The Bulldogs got things going on the first series of the second half, going 70 yards in four plays. Thomas broke away for a 53-yard gain and Limbrick eventually capped it with a nine-yard touchdown dart up the middle, giving the Bulldogs a 21-0 edge with 10:01 left in the third quarter.

The Bears marched from their own 29 down to the Bulldog 10 a little more than midway through the third. Landry hit Pollock for passing gains of 28 and 13 on the drive and McDow broke loose for a 19-yard run that got to the Bulldog 10. However, the Jasper defense bowed up as a Landry pass to Pollock fell incomplete in the end zone on fourth-and-10.

That’s when Limbrick put a stamp on the night as he broke loose on a 92-yard touchdown jaunt down the left sideline, making it 28-0 with 4:03 in the third.

After the Bears went three-and-out, Adams teamed up with the 81-yard touchdown pass to Pickering, who was wide-open along the right side, pushing the lead to 35-0 with 2:43 left in the third.

The Bears will crank up their District 10-4A Division II action next Friday when they welcome in the Huffman Falcons.