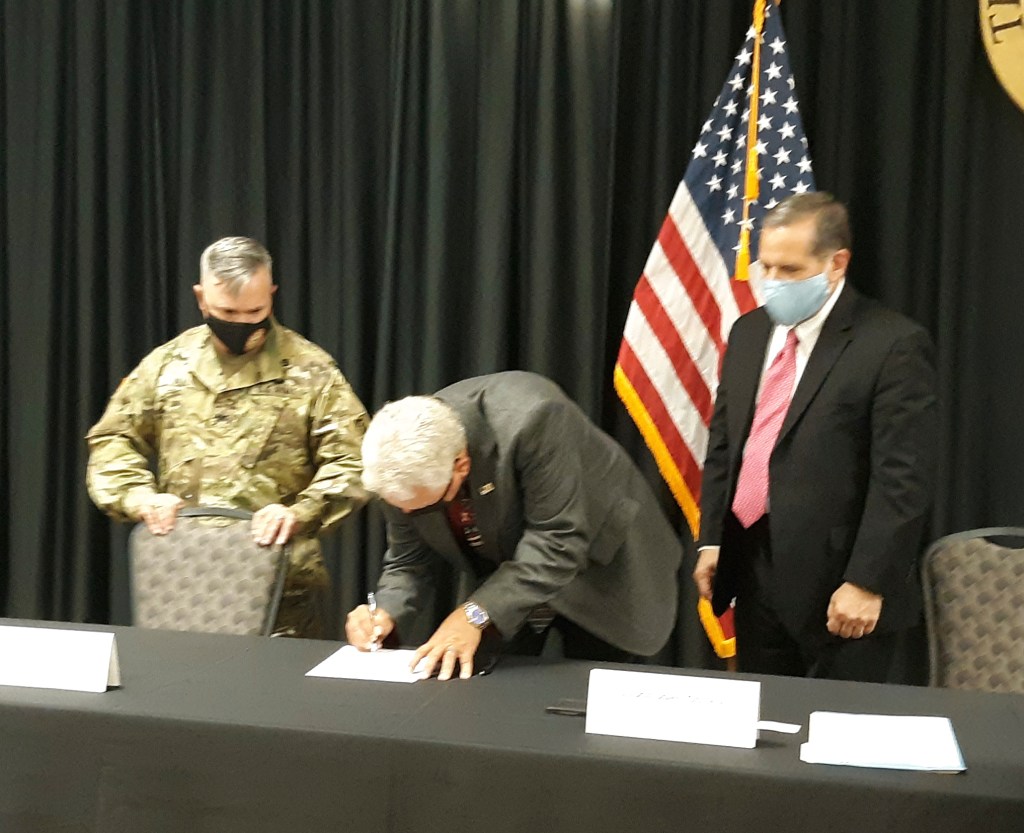 A signing agreement ceremony of historic significance was held on Monday at the Orange County Convention and Expo Center in Orange with the Texas General Land Office, the U.S. Army Corps of Engineers, and local elected officials.

“This is a historic day for Orange County,” Orange County Judge John Gothia said. “This will protect our citizens, our local economy and national economy.”

“All this was essential for acquiring funds for the project,” Gothia said. “It provided the $8.5 million needed for the Orange County portion of the project which is more than our county could have afforded.”

The event began with remarks from Congressman Brian Babin, Judge John Gothia, Galveston’s District commander Col. Timothy Vail, and Deputy Land Commissioner Mark Havens.
“We are pleased to work with the USACE and Orange County leaders on this monumental project,” said Texas Land Commissioner George P. Bush. “This signing agreement is an important milestone in our efforts to protect, reinforce, and strengthen the Texas Coast. Texas citizens trust in their local leaders to ensure that their coastal livelihood is sustained – and the Sabine to Galveston study demonstrates the initiative to do exactly that.”
“We are in a great partnership and the Corps, the GLO and Orange County are great partners in our quest to make not just the design of the project a reality, but the construction of the project,” said Col Timothy Vail, Galveston District Commander. “It’s a long process before we start moving dirt but the Design Agreement is a major milestone in getting closer to building a world-class Hurricane Storm Surge Protection System in Orange County.”
“The Orange County portion of the levee project will protect citizens, the economy and the environment from storm surges and flooding,” said Gothia. “I am grateful for the collaboration of all of the governmental organizations from the local to the federal groups that have worked together to bring this project to this stage.”

Gothia pointed out OC Emergency Coordinator Joel Ardoin was doing an excellent job during the storms.

“When you see Port Arthur and New Orleans on the storm surge maps, they are whited out,” Gothia said. “That is because they have a levee system. I was to be able to say ‘Close the gates’ when a storm is coming so we can protect our citizens.”

“The past storm events, and even most recently Hurricane Laura and Tropical Storm Beta, make clear that Orange County needs a Levee Protection System,” said Orange County Drainage District General Manager Don Carona. “Construction of the project means Orange County would be protected not just from storm surge, but we will also obtain drainage improvements from significant rain events. We greatly appreciate the efforts of our State and Federal leaders in affording us the opportunity to participate in the design of the Project at this time, and in making this Project a reality in the future.”

Carona added there were two reasons for flooding:

“After the last storm, we drove around to check the drainage and all the ditches in the southern part of the county were full,” Carona said. “That was because of a three-foot storm surge.”

Col. Timothy Vail said it was because of the spirit of Texas that this project is happening.

“We are building something bigger than ourselves,” Vail said. “We will show the rest of the country what real coastal resiliency looks like.”

Following Hurricane Harvey, Congress passed the Bipartisan Budget Act in 2018 that fully funded more than $4B to provide a new Hurricane Storm Surge Protection System for Orange and improvement of both the existing Port Arthur and Freeport Hurricane Storm Surge Protection Systems. Together, these systems reduce risk to more than 100,000 residences, critical infrastructure, and the energy industry.

“In the midst of hurricane season and with Hurricane Laura still fresh on Texans’ minds, the time is right to move forward with this project,” said Senator John Cornyn.  “My thanks to Orange County Judge John Gothia, General Manager Don Corona of the Orange County Drainage District, the Texas General Land Office, and the U.S. Army Corps of Engineers for their hard work to make this project a reality.  Their actions will help modernize our aging infrastructure and keep Texans safer in future natural disasters.”

Cornyn authored and passed provisions to fully fund and authorize $3.9 billion for the Sabine Pass to Galveston Bay project in Congress, the final Congressional actions necessary to the U.S. Army Corps of Engineers and relevant local governments breaking ground on this project.

The design agreement establishes a cost-share structure for the engineering design of the Orange project. The design agreement was officially signed on September 18, 2020 by Orange County Drainage District General Manager Don Carona, Judge John Gothia, and Galveston District commander Col. Timothy Vail.
This is a new Coastal Storm Risk Management project, featuring the construction of more than 15 miles of new levees and nearly 11 miles of floodwalls and gates. The improved system will also include seven pump stations, more than 50 drainage structures, and 32 closure gates.