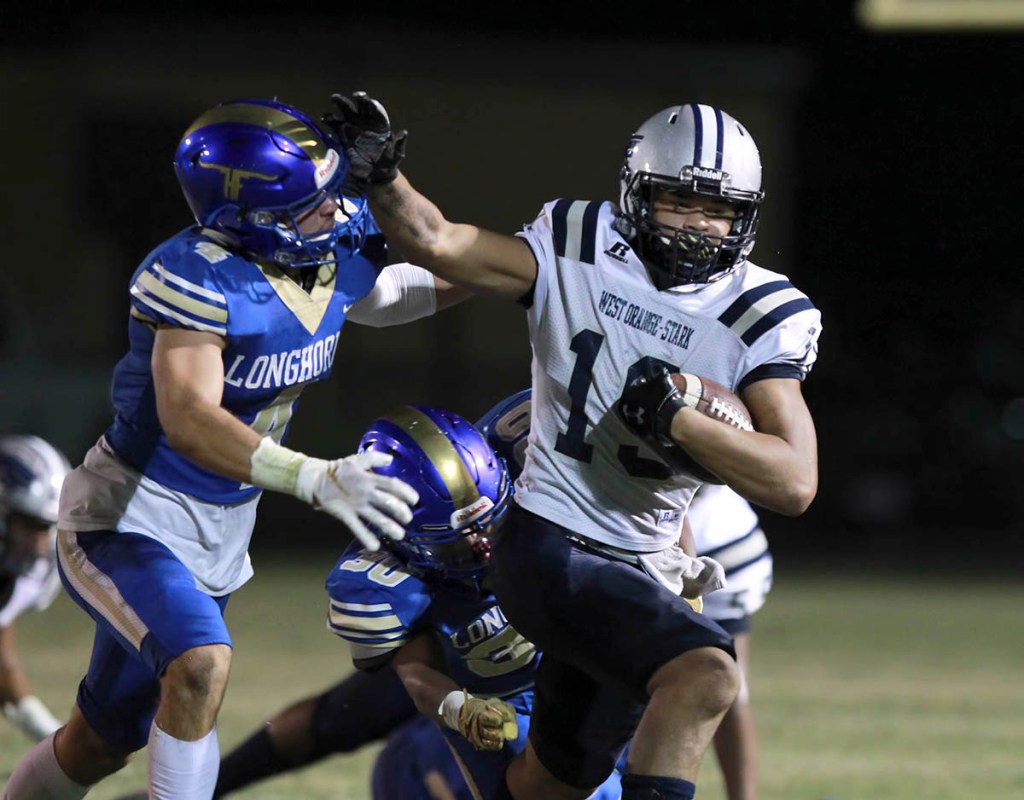 WEST ORANGE – After opening defense of their District 11-4A Division II title with a convincing 37-7 thrashing of the Hamshire-Fannett Longhorns last Friday, the West Orange-Stark Mustangs turn their attention to a much improved Hardin-Jefferson team this week at home at Hooks Stadium.

The Hawks (2-2, 1-0) opened their district campaign with a solid 26-21 victory over the Liberty Panthers as they will fly into Friday’s matchup with a little momentum.

The Mustangs (2-0, 1-0) controlled the game throughout against Hamshire-Fannett and really exploded in the second half.

The Mustangs finished with 503 total yards in the victory and limited the Longhorns to just 179 total yards.

The Hawks will check into the battle with the second leading offense in the district as they are piling up 335 yards a game, second behind the Mustangs.

H-J likes to get the game rolling by controlling it with their run-oriented offense, but that doesn’t mean they don’t like to throw the ball a little more this year.

The Mustang defense, which allows a mere district-leading 115 yards a game on defense, will certainly be honing in on H-J quarterback Jaiden Porter. Porter has completed 18-of-31 passes for 351 yards and is H-J’s leading rusher with 305 yards and six touchdowns on 55 carries.

The Mustangs are churning out a district-leading 467 yards a game through their two games.

Terrell has lit up opposing secondaries, completing 21-of-39 passes for 442 yards with five TDs and no interceptions.

Gales powers the ground arsenal with 238 yards and two TDs on 16 carries.

Zeigler, Jr. has hauled down seven catches for 118 yards while Jalen Thompson has four catches for 159 yards, three of them going for six points, while Gales has caught for passes for 60 yards out of the backfield.

Both squads have an excellent kicking game as Mustang Angel Ibarra has booted 14 extra points and has drilled three field goals while H-J’s Baxter Wirth has also connected on three field goals.