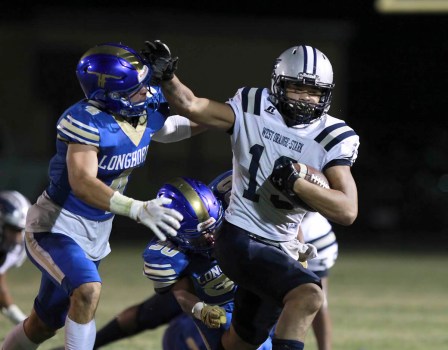 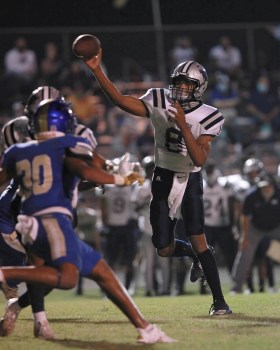 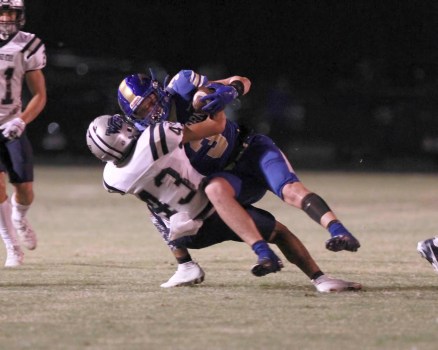 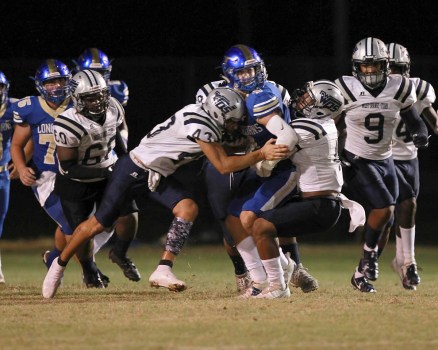 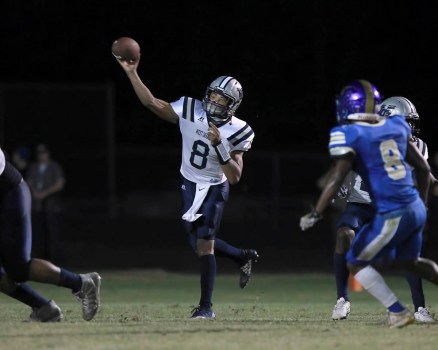 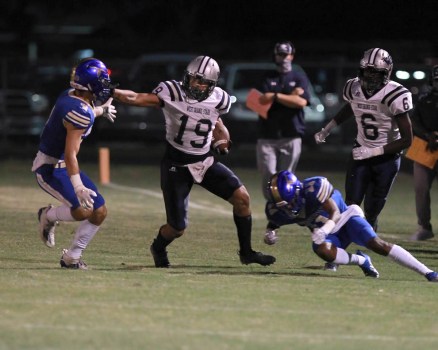 FANNETT – Piling up more than 500 yards of total offense, the West Orange-Stark Mustangs cranked up District 11-4A Division II play with a 37-7 thumping of the Hamshire-Fannett Longhorns at Longhorn Stadium Friday night.

WO-S piled up 503 total yards while the Longhorns had 179 with 89 of it coming on one big pass play.

H-F freshman quarterback D’onte Zeno completed 6-of-18 passes for 136 yards and had two interceptions. Kheagian Heckaman had one big catch for a 89-yard score. The Longhorns could only muster 43 yards on 29 carries on the ground.

The Mustangs controlled the first half 13-0 despite the Longhorns holding them to a pair of field goals in the red zone. WO-S racked up 262 yards in the half while the Longhorns had 74.

The Mustangs marched 59 yards to get on the board on the first drive of the game.

Gales ripped off a huge 40-yard run that got down to the Longhorn 7. However, the H-F defense rose up and the Mustangs settled for a 24-yard field goal by Angel Ibarra as they took a 3-0 lead.

WO-S struck again on their second series, zipping 58 yards in seven play. Terrell completed three passes for 45 yards on the drive. He connected with Jayson Zeigler, Jr. on a 26-yard strike that got to the H-F 27. Four plays later, Terrell hooked up with receiver Jacob Dominquez on a 15-yard touchdown toss across the right side of the end zone, pushing the lead to 10-0 with 2:04 left in the first quarter.

The Mustangs navigated 57 yards on their next possession, but the Longhorn defense rose up and made WO-S settle for a field goal.

Terrell had a big 21-yard pass to Zeigler, Jr. on the series and Gales broke loose for a 29-yard scamper that got down to the Longhorn 2. However, the Mustangs were halted and Ibarra came in and booted a 25-yard field goal with 8:04 left in the first half.

The Longhorns threatened late in the second quarter, moving the ball from their own 25 to the Mustang 24 before the WO-S defense stiffened up.

Zeno completed two passes for 37 yards, one to Jordan Denson for 18 and the other for 19 to Garrett Picou. Back Jordan Joiner ripped off a 21-yard run that got to the Mustang 18.

After a penalty moved the ball back to the 24, Mustang defensive back Patrick Mickey picked off a pass at the WO-S 5 on a third-and-16 play.

Terrell and receiver Jerrold Brown, Jr. teamed up on a 56-yard pass as Brown, Jr. made a great move along the right side that put the ball at the H-F 25. But once again the Longhorn defense rose up, stopping the Mustangs on four straight plays.

Terrell completed 9-of-15 passes for 148 yards in the half. Zeigler, Jr. had four catches for 63 yards while Gales galloped for 85 yards on seven totes.

Zeno completed 4-of-9 passes for 44 yards with Denson snagging two for 18 yards. Joiner had 21 yards on the ground on the one carry while Heckaman had 18 yards on 10 totes.

The Longhorns stunned the Mustangs on the first series of the second half when on third-and-7 Zeno spotted Heckaman over the middle and the back broke away from the Mustang secondary and zipped 89 yards for the score. Kicker Eddie Melendez booted the point-after as H-F trailed 13-7 with 10:16 left in the third quarter.

Gales had 55 yards on three carries on the drive, including a 35-yard dart to the H-F 9. A personal foul call on the Mustangs eventually moved the ball back to the H-F 24 but on third down Terrell had a huge second-effort 21-yard scamper down the left side that got to the 3. The Mustangs decided to gamble and it paid off as Zeigler, Jr., playing the Wildcat quarterback, took it in from three yards out to give WO-S a 20-7 edge with 6:19 in the third.

Taking advantage of a short field the Mustangs struck again quick when Terrell found a wide-open Jalen Thompson streaking down the left sideline for a 42-yard touchdown bomb, pushing the advantage to 27-7 with 4:30 in the third.

Gales made some special team noise as well as he blocked a H-F punt late in the third quarter, giving the Mustangs the ball at the Longhorn 11. The Longhorns held firm as Ibarra came in and booted a 26-yard field goal on the last play of the quarter to make it 30-7.

Mustang defensive back Jadon Jones picked off a Zeno pass at the Mustang 28 and the Mustangs hit paydirt just five plays later behind the running of back Jailen Brown. Brown broke loose for a 18-yard scamper to the H-F 25. On the next play, Brown, who had three carries for 48 yards, showed a tremendous effort, breaking several H-F tackles along the right side and finally found daylight to score from 25 yards out, pushing it to 37-7.

The Mustangs return home next week to face the Hardin-Jefferson Hawks while the Longhorns head to Bridge City to face the Cardinals.