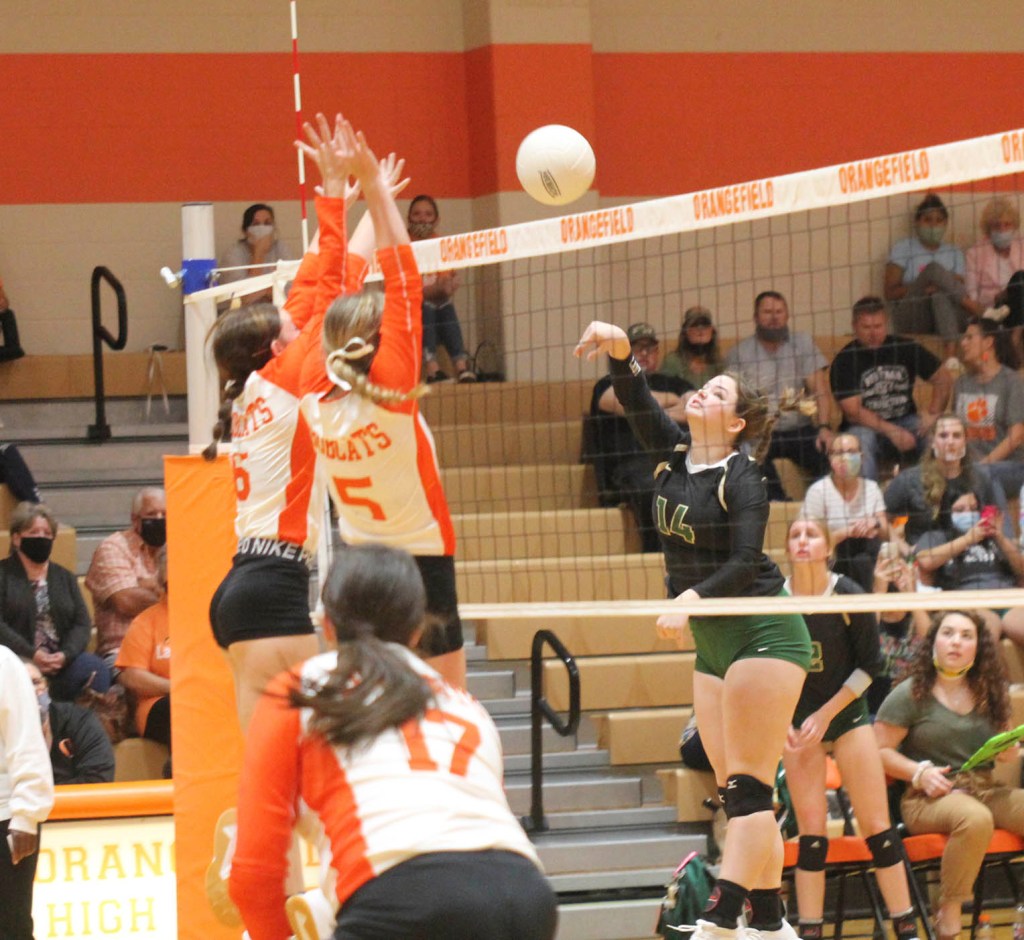 Van Wade/Orange Leader LC-M’s Hallie Maddox (14) goes up for a kill over the outstretched arms of Orangefield’s Emma Humplik (5) and Mackenzie Haley (6) during a grueling match Tuesday night at Bobcat Gym.

ORANGEFIELD – Both teams battled hard in a match that lasted a little more than two and a half hours but it was the Little Cypress-Mauriceville Lady Bears that persevered as they squeezed out a thrilling five-game victory to take a district volleyball match against the Orangefield Lady Bobcats at Bobcat Gym Tuesday night.

The Lady Bears used a very balanced arsenal to turn back Orangefield.

Christina Joseph paced the Lady Bear offense with 15 kills. Alyssa Ammons, who had a huge Game 5, had 12 kills for the Lady Bears while Trinity Williams had eight and Olivia Hogan added five.

Williams was all over the place for the Lady Bears in setting up the offense, but it was her defense that really shined as she notched a whopping 42 digs.

The Lady Bear win offset another huge performance from Orangefield’s top hitter Madison Greenway. Greenway was a thorn in the LC-M side all night as she put together a stunning 27 kills. Emma Humplik added 10 kills for the Lady Bobcats while Hannah Francis had eight.

The Lady Bears controlled Game One most of the way before Orangefield trimmed it to 21-18 late and then LC-M captured four straight points to finish it.

The Lady Bobcats stormed out to a 9-2 cushion in Game Two and capped it with the game’s last seven points.

In Game Three, it was LC-M that scooted out to a comfortable 9-2 lead but it didn’t last as the Lady Bobcats scored two points late to tie it at 24-24. LC-M would go up 27-26 after a Joseph kill and the Lady Bears sealed the game with a Shannel Anderson ace.

LC-M looked to close it in Game Four and led 13-10 but the Lady Bobcats found a flurry and went on a 15-7 run behind the hitting of Greenway and Francis to snag it.

The Lady Bears simply controlled Game Five from the beginning with Joseph serving up six straight points that enabled LC-M to snag a 8-1 advantage. Anderson also served up four straight points, including an ace and Ammons had four of her kills down the final stretch to stymie any Orangefield comeback attempt.