Anahuac holds off Cardinals in OT, 28-21 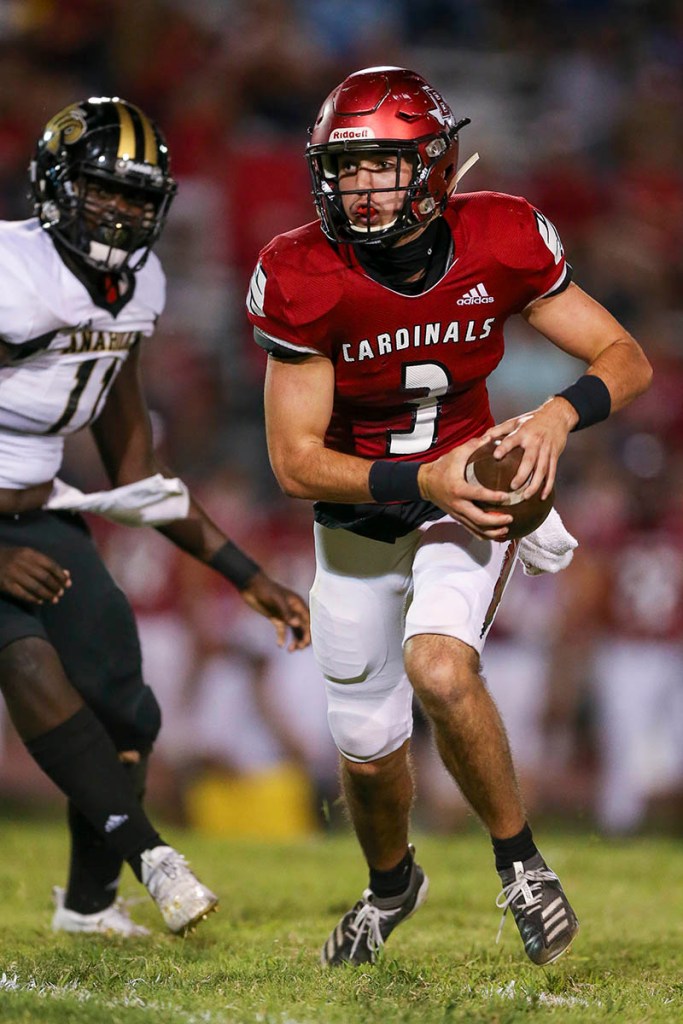 BRIDGE CITY – Following an 0-2 start to their season, Anahuac squeaked out a win against Bridge City in an overtime thriller Friday night by a score of 28-21 at Ward Stadium.

While Anahuac had already played the last two weeks, Bridge City suffered from first game jitters in their opening night of the new season.

The game got off to a very slow start, as both teams failed to get any offense going on their first two opening drives. However, things began to change when Bridge City took possession of the ball with two and a half minutes left in the first quarter. A 21-yard pass from junior quarterback Ethan Oceguera to tight end JT Fielder finally got things rolling, but the game remained tied 0-0 at the conclusion of the first quarter.

To start off the second quarter, Bridge City established the run game by rattling off several short gains to put themselves in scoring position. Oceguera put BC on the board with a 27-yard dime to senior receiver Austin Richardson for their first points of the game. Following the extra point from kicker Oscar Carranza, Bridge City led 7-0 after their 69-yard, 12-play drive.

Anahuac took possession with 9 minutes in the second quarter, and they quickly took charge. A 23-yard pass kick-started what would become a 16-play drive, fueled by big rushes from Christian Sanchez and Landon Corbitt, the latter of which would eventually cap off the possession with a touchdown to tie things up 7-7.

Following the break at halftime, Anahuac came out firing on all cylinders. After six straight rushes from the Panthers, Corbitt found Zyon Clark in the end zone for a 30-yard touchdown pass. However, things went south when a bad snap prevented them from booting in the extra point, leaving them up 13-7.

Dorian Pruitt opened up the Cardinals first drive of the second half with a nice 19-yard kick return. A couple of plays later Sam Carpenter hauled in a 15-yard pass for a first down, but a sack on a crucial play and a poor special teams play gave Anahuac the ball back with a few minutes left in the third. Both teams would go three-and-out on their next possessions though, and the third quarter came to a close with Anahuac still leading 13-7.

Anahuac began the final quarter of the game with a big drive downfield ending in a 10-yard touchdown rush from Christian Sanchez. Since they were only up by 12, the Panthers chose to go for two, and senior Jemaj Bailey punched it in to make the score 21-7.

After a penalty on the kickoff, Bridge City took over in great position at the 35 with nine minutes left. Joey Murty caught a 26-yard pass to put them at the goal line and Ethan Oceguera found the end zone on a two yard rushing TD. After the extra point, Bridge City trailed 21-14.

During the final minutes of the fourth quarter, BC’s defense came up huge, stuffing a crucial run on third and short as well as forcing another three-and-out on Anahuac’s next possession. With 1:47 left in the game, Austin Richardson caught his second touchdown of the night and the Cardinals tied the game up at 21-21. Trey Hebert recovered an Anahuac fumble shortly thereafter, and the game went to overtime.

Unfortunately for Bridge City, Anahuac’s rushing attack proved too much for them to handle and they gave up one more touchdown on the ground. Faced with a score-or-go-home situation, a forward pass call and interception would eventually cost the Cardinals the game 28-21.

Despite some sloppy penalties and four total fumbles, Anahuac should feel good about getting their first win of the year as well as putting up over 150 rushing yards on the night. Bridge City certainly had a good night after halftime, but should look to improve their defense heading into their bye week in preparation for their next game against Hamshire-Fannett at home Oct. 2 to start District 11-4A Division II play.