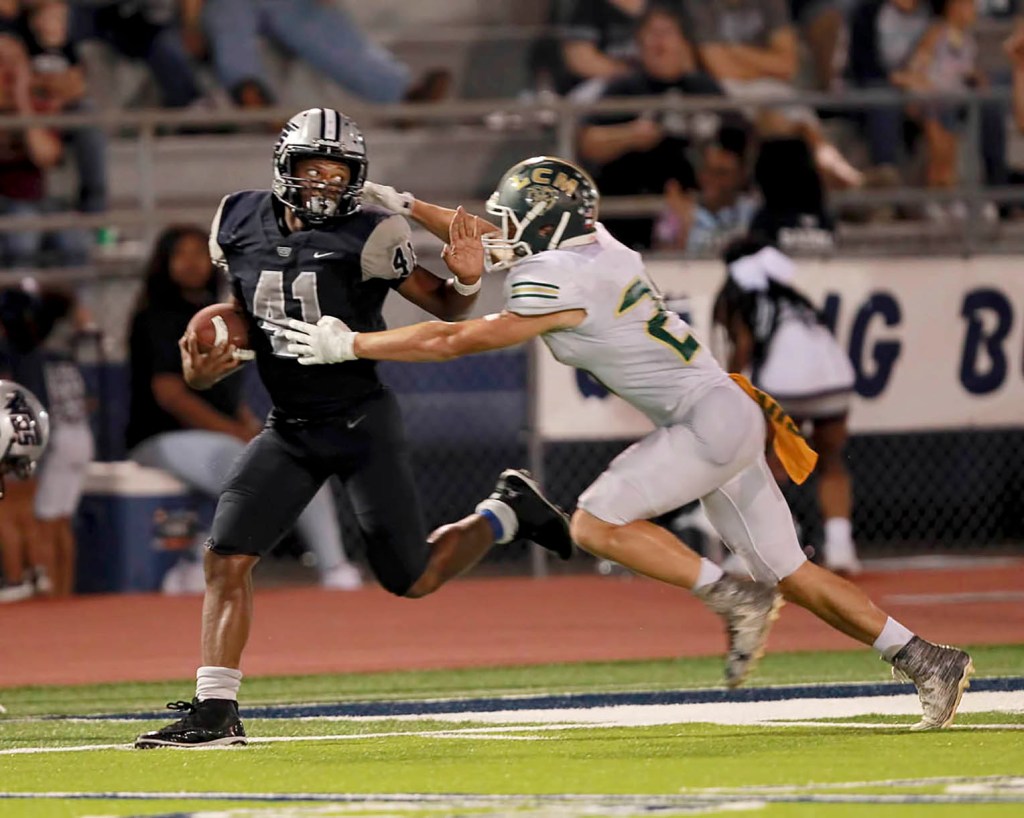 WEST ORANGE – Excitement always reigns supreme at West Orange-Stark when it comes to each and every football season.

For the winningest program in the state by percentage, it has always been about traditions, and of course, streaks.

Right now, let’s just say the Mustangs want to continue that trend under the guidance of long-time head coach Cornel Thompson as they will finally get to play a football game Friday night when they welcome in the Newton Eagles.

The Mustangs have missed three games due to Hurricane Laura that included Waco La Vega, LC-M and Jasper.

Newton has played one game, falling to Jasper 63-20 last week.

WO-S has captured nine straight district championships and made nine straight trips to at least the Class 4A Region III Division II Finals.

And yes, those were those four straight trips to state from 2014-17 in which the Mustangs captured two state crowns in 2014-15.

“Hopefully we can carry on the great tradition set here and if we can do that again under this unique situation dealing with the Corona virus,” said Thompson. “The kids are just thrilled to get the opportunity to get on the field and play some football. There may be a few kinks in the plans along the way for so many schools through all of this, but wouldn’t it be just great to get a whole season in.”

Now the Mustangs, who went 10-2 last season and advanced to the 4A D2 Regional Finals, will look to continue the streaks and even try to go beyond them and will also try to deal with district rival Silsbee again. The Mustangs defeated the Tigers to win the district title the last two seasons but have fallen to Silsbee in the last two Region III Finals.

Despite the ongoing battle with the COVID-19 virus, Thompson was pleased how the Mustangs worked during the first several weeks of practice.

“We’ve had a super turnout, which we’re grateful for,” said Thompson. “Dealing with the virus, I’m pretty sure we’re going to have the most deepest varsity team we’ve had in years. We’re going to have a lot of JV kids on standby, you just have to plan that way in case anyone runs into trouble and I’m sure that is happening all over the state.”

The Mustangs return four starters on offense and six on defense from last season’s unit.

Senior quarterback Jerren Terrell will guide the offense again after a solid junior campaign which saw him pass for 1,453 yards and 12 touchdowns.

“Jerren is going into his third year at quarterback and his second year starting and he has shown tremendous progress over the summer,” said Thompson. “His arm has gotten better along with his accuracy and the kids can really lean on him as far as leadership goes.”

Junior running back Elijah Gales is back in the mix and is one of Southeast Texas’ most dangerous all-purpose players. He zipped for 1,389 yards and 24 TDs last season.

“Elijah was so solid for us last year and we expect the same again this year,” said Thompson. “He’s got pretty good speed and it’s hard to wrap him up.”

JaQuailon Chaney is also back in the mix after zipping for 292 yards and three TDs on just 46 carries and Quinton Walker is also expected to make an impact.

Jaylen Thompson is back at receiver after hauling in 17 passes for 319 yards and four scores along with Artavious Samuel and Jacob Dominguez.

“We’re pretty good as far as our skill positions, and we’re still looking to find depth across the board in all of our positions,” said Thompson. “Our biggest concern going into the season is the depth on our offensive and defensive lines. We have a few guys returning that played well last year, but we’re looking to find them some help and looking for some of our young guys to step up in there.”

Powering the returning defensive unit is senior linebacker Tyrone Brown. Brown, the 2019 All-Leader Team’s Defensive MVP and Baylor commit is back after notching 149 tackles, 88 of them solo, for the top-ranked defense in district. He also had five sacks, seven more QB pressures and four tackles for losses. Kaiden Berry is also expected to make a nice impression stepping in at the other LB spot.

“Tyrone had a great year last year in setting the tone for our defensive unit and he will look to do that again, not only with his skills but his leadership too,” said Thompson. “Berry has been doing a good job too. They could be a good tandem.”

Floyd Mouton returns to the defensive front as a noseguard with Dontrey McClain at rover and Carmelo Jones at the tackle as the Mustang staff continues to develop and evaluate other defensive linemen to fill the gaps and for depth.

The secondary is paced by junior Jadon Jones, who made all-district as a sophomore at cornerback along with Samuel at the other corner. Jaschin Harris will look to play at one of the safety slots.

Kicker-wise, the Mustangs have one of the best in the district in Angel Ibarra. Ibarra booted 47 extra-points and made four field goals last season.