Cardinals anxious for Anahuac and to test 4A Division II waters 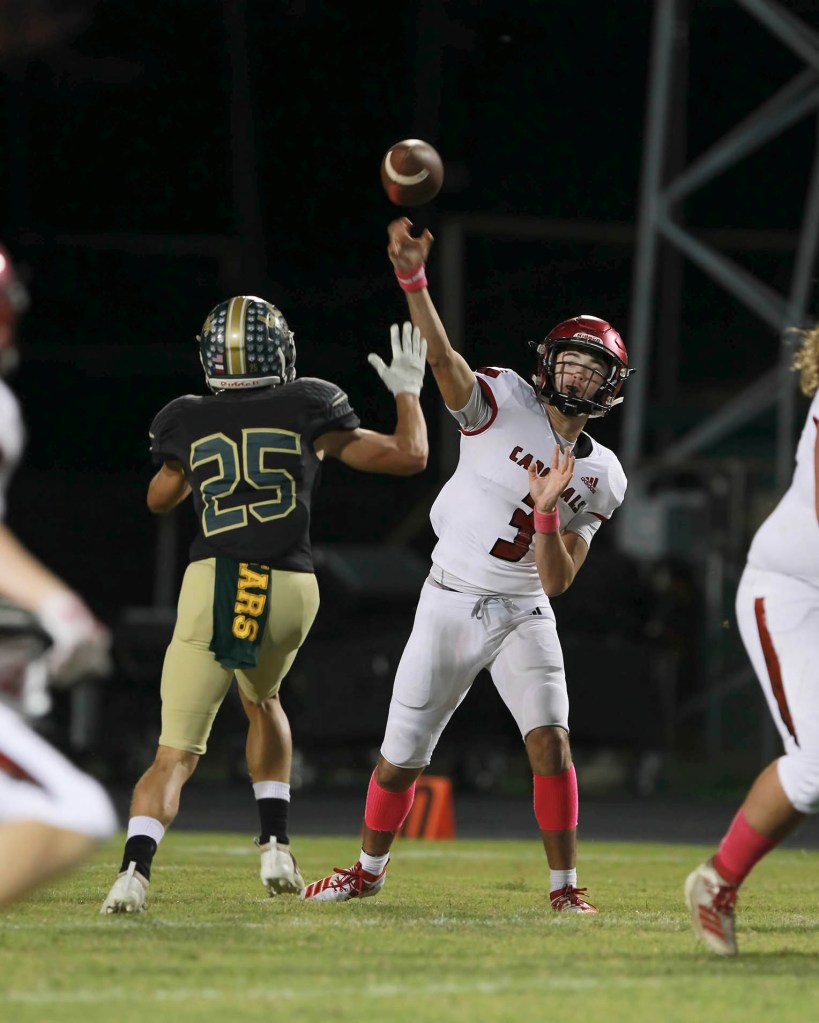 BRIDGE CITY – Football season is drawing near for the Bridge City Cardinals and they are ready to lace it up after scrapping hard to make the playoffs in Class 4A Division I last season.

After seeing their first two games canceled due to Hurricane Laura, the Cardinals will welcome in the Anahuac Panthers (0-2) Friday, Sept. 18.

Bridge City was the smallest school in the state in Class 4A Division I last season but the Cardinals, a young squad last season, still managed to “will” their way into the postseason for third-year head coach Allen DeShazo.

This time around, the Cardinals will be the “big boys on the block” as they have moved down to the Class 4A Division II ranks as Bridge City will be the largest school in District 11-4A Division II.

“It was nice to make the move down because we were battling the numbers game at times in Division I, but the kids always battled hard,” said DeShazo. “But dropping down is no bargain when you think of playing WO-S and Silsbee, who are in the hunt every year in chasing regional and state titles. Hamshire-Fannett has been really good the last couple years. Liberty always has some great athletes and have had a good run of late. Hardin-Jefferson is going to get better and of course, we have the Bayou Bowl again with Orangefield. That always gets both schools pumped up. You have to be ready to lace it up and get after every single Friday night.”

The Cardinals have worked hard all summer long, despite having to deal with all of the COVID-19 protocols and the coaching staff has done an excellent job in keeping the athletes safe.

“At first, you wondered how the kids were going to handle it and they’ve done really well,” said DeShazo. ““There is a lot that goes in to it but the kids have responded to everything so well, starting with wearing the masks, we’ve had very little issues with that. “They also bring their own water to practice and we have a designated water person to make sure all of it remains safe. When practice is over, we try to get them in, let them take showers as quickly as possible and then getting them out of the fieldhouse as soon as possible. It’s tough for them to not stick around and mingle like they used to, but it is what has to be done and they understand.”

The Cardinals will dive into the season with six starters back on each side of the ball from last season’s 3-7 bidistrict playoff unit.

Leading the way on offense again will be junior quarterback Ethan Oceguera. Oceguera made some huge plays in creative ways after starting as a sophomore.

“Ethan is a tremendous athlete and he can do so many things with his legs and arm,” said DeShazo. “He learned so much starting all of those games last season and since then, a lot of things have clicked in his head from what he saw last year and he has worked so hard to improve in all areas. He had a great offseason, he picked up about 15 pounds, basically all muscle.”

The backfield will have experience back in the forms of running back Dorian Pruitt and fullback Logan Ply. JS Bearden, a sophomore, will also try to make an impact.

“Dorian and Logan, they know what it is all about now after the experience they gained last season and both are so reliable in everything that we want to do. Bearden has the capability to fit in well and become a good one.”

The Cardinals have an array of receivers that will include Austin Richardson, Blake Moore, Joey Murty, Gavin Garrett, Kyler Garlaska and Jaden Martinez.

Tight ends will be JT Fielder and Sam Carpenter, a Lamar University baseball commit, who is making a return to the gridiron.

“We have the potential to be very good on offense, especially with most of our key skill people back,” said DeShazo. “We’re looking for some younger kids to step in and fill roles, especially up front on both the offensive and defensive lines.”

The defensive line will look to be paced by tackles Cody Howard, Fielder, Ethan Play and Clayton Whatley.

The Cardinals look to be deep at linebacker which includes inside guys Dillow and Harrison Gauthier and outside guys Trey Hebert, who had 80 tackles last season, 11 for losses, including four sacks, Bearden and Alberto Mungia.

The secondary has a wealth of experience back in returning starters Pruitt, Deegan King and Gavin Garrett with Richardson and Carpenter expecting to see plenty of times as well.

The Cardinals are also blessed to have one of the best kickers in the district in Oscar Carranza while Oceguera looks to handle the punting chores again after a solid campaign there last year.

DeShazo anticipates a good season for the Cardinals as this will be a “new” kind of season were every football program across the state.

“We really love the group we have and we are trying to create as much depth as we possibly can and we feel like we really have the opportunity to have a really good season,” said DeShazo. “I, like so many coaches across the state, is going to be concerned as soon as we see kids walk in with the snorts and the sniffles but it is the sign of the times these days. Hopefully we can have a smooth season and not have to adapt too much as far as changing schedules are moving games around. The kids are ready and so are the coaches, we’re just so happy to have a chance to go out and play and coach in the game we all love.”