Bobcats drop tight one to Livingston in opener 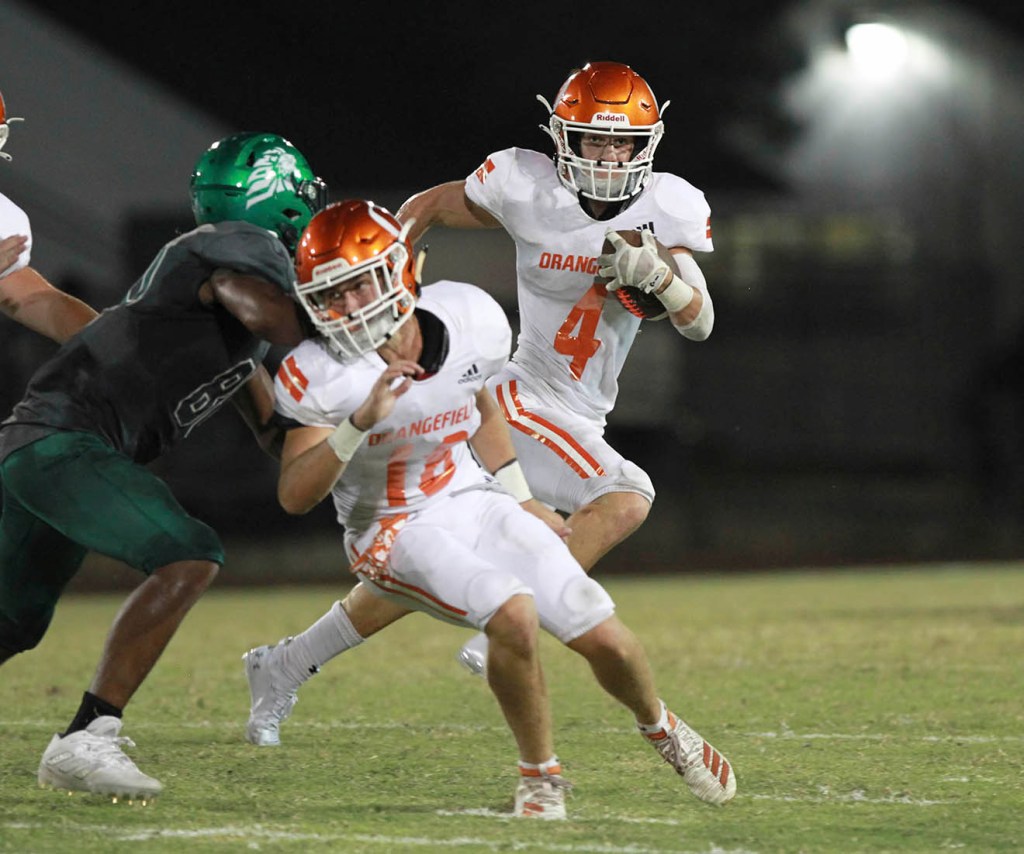 LIVINGSTON – It was a tough pill to swallow for the Orangefield Bobcats in their season opener Friday night as the boys in Orange and White gave it all they had but still fell short to the Livingston Lions 21-20 at Lion Stadium.

The Bobcats (0-1) dominated the tempo of the game throughout but the Lions (1-3) were able to score 14 points off Bobcat turnovers by scoring on a couple big plays.

“Our kids got after it all night and we’re proud of them,” said head coach Josh Smalley. “They (Livingston) already had two games under their belts and plenty of more practices but we’re not going to make excuses. We had a couple turnovers on our end of the field that they cashed in on and a fake punt that failed us.”

Orangefield went on a 15-play, 70-yard scoring drive late, using a slew of backs on the march and quarterback Gunner Jones had a one-yard sneak for a score with 0:33 remaining to trim it to 21-20.

The Bobcats elected to go for the win but Jones was stuck by two onrushing Lions’ linebackers on the two-point conversion attempt.

“We liked the momentum we had going and we thought we could cash in and we would go for the win,” said Smalley. “Give credit to the Livingston kids, those linebackers made a big stop on the play.”

Orangefield did manage to get the ball back on an onside kick but Lion defensive back Christian Washington picked off a Jones’ pass at the Lion 32 with 0:15 left to seal it.

The Bobcats ran a whopping 75 plays to the Lions’ 23 but the two turnovers and a fake punt attempt that failed proved costly.

“I thought we ran our game plan well and the offensive line did their job and our backs ran hard,” said Smalley. “It was a tough loss for sure and I feel like we learned some things about ourselves tonight and that we have plenty of fight. We’ll go home and regroup and look forward to playing Buna at home next week.”

Orangefield led 14-7 at intermission but the Lions plopped on a Bobcat fumble at the Orangefield 32 with 9:38 in the third quarter and on the very next play Lion tailback Lynn Johnson was able to tie it when he went 32 yards for the score around left end.

Johnson finished with 89 yards on five carries and two TDs.

Bobcat Tyler Washington stymied a Lions’ drive when he intercepted a Damian Ruiz pass on third-and-goal from the 5 in the back of the end zone at the end of the third quarter.

Johnson put the Lions up to stay when he bolted up the middle and outsprinted the Bobcats on a 55-yard scoring jaunt to make it 21-14 with 8:43 remaining.

The Bobcats simply didn’t go down without a fight as they chewed up 8:01 of the clock with Jones finishing it with a sneak as seven Bobcats carried the ball on the 15-play march.

Hunter Ashworth led the Bobcat ground game with 64 yards on 15 carries. Dwight Davis had 50 yards on 13 totes. Washington finished with 44 yards on eight carries while Cameron Dischler had 37 yards on 11 carries.

Ruiz completed just 2-of-5 passes for 49 yards for the Lions.

The Bobcats definitely controlled the ball in the first half, running 36 plays to the Lions’ 11 and Orangefield outgained the home team 174-65 in the half.

The Lions took advantage of an early Bobcat fumble at the Orangefield 38 with 5:18 in the first quarter.

The Lions’ biggest play of the half came when Ruiz connected with J.J. Gardner on a 35-yard strike along the right side that got to the Bobcat 3. Two plays later, Ruiz scored on a one-yard keeper as the Lions snared a 7-0 lead with 4:41 in the first quarter.

The Bobcats then controlled the tempo and the game for the remainder of the half.

Orangefield kept the Lions’ defense on the field for a grueling 14-play, 61-yard touchdown drive that ate up 7:20 off the clock as the Bobcats tied the game up.

The Bobcats used a variety of backs to get the ball down the field and converted two big fourth down conversions.

The biggest one came when Jones hit back Dwight Davis over the middle for a huge 23-yard dart on fourth-and-14 that went down to the Lion 2. On the next play, Jones scored on a two-yard sneak and then booted the extra-point to make it 7-7 with 6:08 in the half.

After forcing the Lions into a quick three-and-out, the Bobcats had another huge scoring march to close out the half, zipping 70 yards in 11 plays.

Davis was huge on the series as he had rushes of 9 and 13 yards and then caught another critical pass over the middle on second-and-12 from the Lion 22 that went for 11 yards to the 11.

Davis capped the drive with a eight-yard sweep around the left end with just 0:05 left in the half to give the Bobcats a 14-7 edge.

Jones completed 2-of-5 passes, both to Davis, that totaled 34 yards.

Ruiz was 2-for-4 in the air for the Lions for 49 yards while Jamarri Green led the ground game with seven yards on just two carries.

The Bobcats will return home next week to host long-time rival Buna.