The aura of a special day added to the enchantment of a special place, beautiful Bryant Park in Manhattan. The weather was made to order, unseasonably cool, and a few thousand people–most of them visiting gawkers like me–adorned the grassy pallet of green.

Soon, theirs would be a chorus of screams that only teenagers can make when rock star idols, uh, well, rock!

Invigorated by a brisk four-block walk from the hotel, I wilted upon seeing this sea of youthful humanity, quiet–ever so quiet–as if countdown had begun for a space shot. I wondered if my arrival in the park increased the average age there by a couple of years.

I was there because it’s where ABC’s Good Morning America telecast was scheduled that Friday in June. Pad in hand, I was directed to a small seating area at stage left. I jotted a note about the youngsters’ quiet anticipation of Maroon Five, the featured musical group that day.

The name sounds more like a basketball team to me, but no, this is name for well-known guitar-plunkin’, drum-beatin’, song-singin’ guys about whom I was formerly clueless.

The hush in the park was magnified by an aerial display, the likes of which I’d never seen.

Every few seconds, foam shapes, four feet wide and a foot thick, floated skyward. The “flogos” included shapes of angels, musical notes and stars, belched from a device made by Snow Masters in Lexington, AL. (They reach heights of 20,000 feet and sometimes travel 30 miles before disintegration.)

Invented by a former magician, Francisco Guerra, these flying objects are composed of a water/air/helium/soap agent. They floated lazily over Manhattan, dotting a blue canopy that was a cloudless sky.

I was pumped, finally seeing the park I’d heard much about, then witnessing a contraption that clearly fits into the “what’ll they think of next” category.

What came next, though, was infinitely more special. In addition to pads, writers have ears.

I heard snippets of hushed conversation from folks in the row in front of me. There were five 16-year-old girls and a couple of moms. They sounded decidedly southern with good reason. They, like the big foam bubble machine, came from Alabama.

Seeing Diane Sawyer, Robin Roberts and Sam Champion “up close” was an intriguing prospect, but the “star” was seated directly in front of me. Her name is Mackenzie Derr.

She has experienced cancer twice in eight years, forfeiting a limb when Ewing’s Sarcoma was found in her left knee as an eight-year-old third-grader. Last November, the same cancer was diagnosed in her right leg. Again, amputation was necessary.

Through it all, her faith, smile, endurance and determination sustained her and amazed others, starting with her mom Ellen, dad Tom and 13-year-old brother Matthew.

Following her second surgery, she made a sign for her hospital door:  “Footless, but not DeFEETed!”

The Life Inspiration Award from the American Cancer Society was awarded to Mackenzie following her first surgery in 2001.

She “made do,” taking on the challenges of a prosthesis. Fond of dancing, she continued taking lessons.

Before the second surgery, she opted for a hair-cutting party, sending her 12-inch-long tresses to Locks of Love. (This is a charitable organization that makes wigs.)

Oh, I should add that four friends with her in NYC were from an army of admirers who helped sustain her during tough times of chemo treatment. And the whole bunch was there thanks to a “wish” granted by Birmingham’s Tum Tum Tree Foundation. They saw a Broadway play, lodged in the Trump Hotel, shopped until frenzied and visited landmarks, whisked around the city in a limousine.

Now, they’re back in Vestavia Hills, where ‘Kenzie is a junior in high school.

Last year, a teacher gave her home instruction. She made all A’s, despite her yearning to sleep much of the time.

‘Kenzie recently learned to drive, and sports a vehicle with hand controls.

It’s easy to understand why she’s such an inspiration. Those who love her are awestruck by her many accomplishments, including:

She has modeled for the rest of us that no matter what life dishes out, it can be dealt with through hard work, grace and humor.

This plucky youngster is determined to deal positively with whatever comes next.

For me, and a cluster of others in Bryant Park that day, she was the “Toast of New York.”

In the future, when I see balloons or UFF’s (Unidentified Flying Flogos), or feathers floating skyward, I will think of–and pray for–a happy youngster in Alabama who is helping others put “their best feet forward.”

Dr. Newbury is a speaker and author in the Metroplex. He welcomes inquiries and comments. Email: newbury@speakerdoc.com. Phone: 817-447-3872.  Website: www.speakerdoc.com 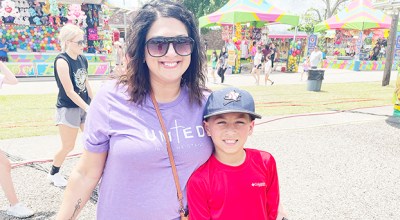