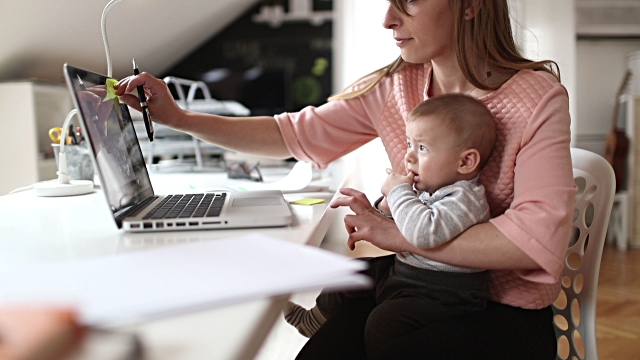 lyncconf.com/Flickr More than 150,000 undergraduate students in Texas are single mothers.

AUSTIN, Texas — Student parents have some major considerations as the new school year begins.
From closed childcare centers, to nationwide computer shortages and limited broadband access in some areas, the pandemic has exacerbated the challenges.
Cristina Guajardo is a resident at the Jeremiah Program in Austin, which provides lower-income single moms with safe and affordable housing and childcare.
With her two-year-old son’s daycare closed, she’s a full-time parent taking online classes at Texas State University, and her senior year just started.
“I’m not fully present with my classes, I’m not fully present for him,” Guajardo said. “And it’s just a matter of trying to juggle it all. And at the end of the day, I’m exhausted.”
But Guajardo hopes she’s setting a good example for her son, for resiliency and how to overcome obstacles in difficult times. About one in four Texas undergraduates is also a parent.
Student parents, especially single mothers and Black parents, tend to have more student debt and less financial security than their peers who don’t have children.
Marisa Phillips, executive director of Buckner Children and Family Services in Lufkin, said there are support gaps that institutions aren’t filling, or even aware of.
“It is rare at this point that schools even track or know exactly how many of their students are parenting students,” Phillips said.
Phillips added more campuses are bringing on designated staff to help support student parents with their financial and childcare plans, textbook loans, and other needs. But it’s a work in progress.
Childcare centers on college campuses have been gradually closing over the last decade.
With so many families together at home, Guajardo noted more people now understand the challenges of working and watching the kids simultaneously.
“You know, before, that was something that maybe people weren’t aware of,” Guajardo said. “But for a lot of moms in poverty, and a lot of single moms in particular, that’s our reality. That’s our every day.”
She hopes the programs will lead to better quality and more affordable childcare options, beyond the pandemic.