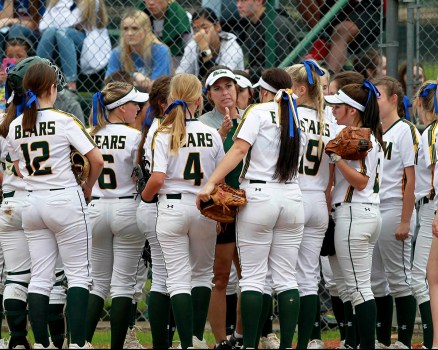 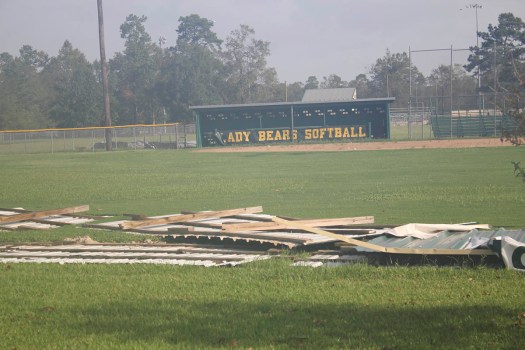 LITTLE CYPRESS – As a long-time coach and teacher, Little Cypress-Mauriceville head softball coach Dena Adkins thought she had seen it all and then 2020 struck.

In March, she saw her Lady Bears play just a small handful of games before they got their season “wrecked” by COVID-19.

Teachers reported back to school in August and were able to teach the kids for a whole week before Hurricane Laura blew through the area.

The LC-M Lady Bear Softball Field took a beating as the entire fence was blown away, along with other structural damage. Plus, Adkins, is also the head coach of the cross country teams, so these are definitely trying times.

“Our softball field will definitely need a lot of work,” said Adkins. “Most of it is fence damage, which that didn’t surprise us, because it was getting old already and that fence was here way before I even got here.”

What really bothered Adkins the most were the sponsor signs that were adjoined to the fences.

“That is what makes me the saddest most,” said Adkins. “We have such tremendous sponsors and a lot of those signs were new. I feel for them so much because their businesses have been hurt through this COVID-19 pandemic and they were so gracious to help out our program. I think we basically played one game on the field the whole season.”

The Bear cross country unit has yet to participate in a meet and missed a big Huffman event already that featured a lot of schools.

“I just don’t know where we stand there as of yet because so much of the Little Cypress area remains out of power and the kids are busy cleaning up and some are not even in town,” said Adkins. “We want to get back to work as soon as we possibly kind and that all depends on getting power restored and when school can start back up. I really feel for those football kids, they are getting behind daily.”

Adkins is hoping that LC-M High School can get up and running very soon because she and so many other teachers were thrilled when they were able to basically return in August after not being their since early spring.

“It was so exciting when the teachers reported that first week and the kids the next,” said Adkins. “It wasn’t complete normalcy because we had to learn a lot of new things as far as teaching goes and you know how it is sometimes when you try to ‘teach old dogs new tricks’, but we were picking it up. The kids were doing great with all of the new rules. It was so awesome, and then 2020 struck again.”

“I just can’t wait to get back, I miss my players, students and co-workers,” said Adkins. “It was awesome to get back in the groove in August and you know what, we’ll get back into that groove and routine in September. Our district is great and we’ll bounce back, we always have in these situations. I just want to say, I hope everyone is being safe right now, working in their yards and battling the heat. We’re going to be okay.”

According to Coach Crouch, the fieldhouse seems to be in pretty good shape but others venues across the campus did not.

The softball field took a blow as well as the fencing is missing around the entire field and some damage was done to the pressbox.

At WO-S, the brand new video scoreboard was shredded and was laying on the ground and the top of the baseball stands overhang was mangled bad. There were several other structures that received damage and WOCCISD is assessing the situation this week.

Over at Bridge City, Coach Allen DeShazo was on hand dissecting the situation.

The fieldhouse seemed to be in fairly good shape, despite facing a few leaks here and there.

Out of the four schools, Orangefield High School seemed to take the least amount of destruction.

Coach Smalley said that there was a light pole down on the baseball field. There is a light pole leaning towards the track area. Both fences seem to be okay at both the baseball and softball fields. The backdrop cage on the softball field shifted quite a bit but is okay. Smalley said it was much better than he thought it would be and said there are plenty of cosmetics to be worked on here and there.