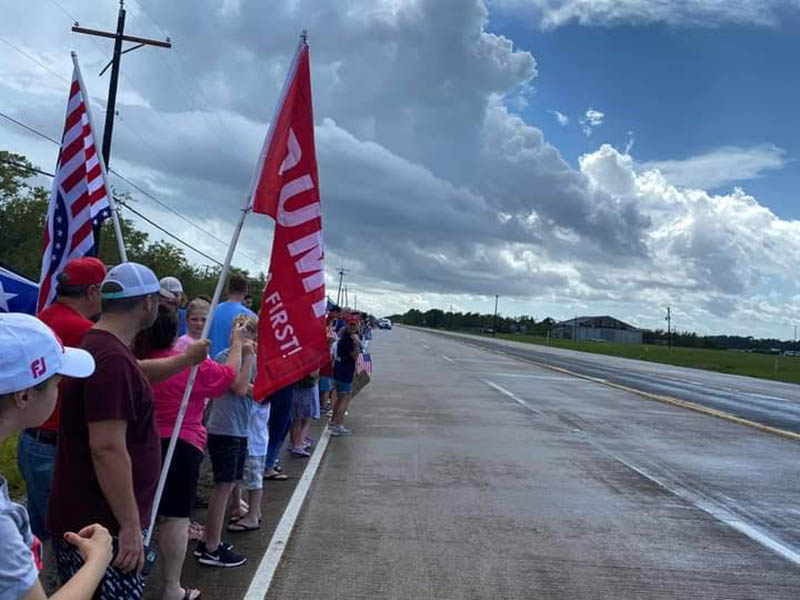 Courtesy Photo Hundreds were on hand to greet President Trump Saturday before in arrived at the Orange County Expo Center.

The motorcade, however, entered southbound, opposite the throng of well-wishers, into the Orange County Convention and Expo Center for a roundtable discussion on relief efforts following the impact of Hurricane Laura early Thursday. The discussion included Gov. Greg Abbott, first responders and other public officials, many of them carrying American flags and banners in support of Trump’s bid for reelection in November. The public was not admitted into the facility.

I’ve seen a lot of hurricanes. I went to the state legislature right after Ike hit in 2008, and I have never seen so much coordination between the federal government, FEMA and the state, so we’re thrilled at the job they’re doing.”

Weber expects that those impacted in Southeast Texas and harder-hit Southwest Louisiana will see relief assistance including housing. Both Trump and Abbott issued disaster declarations for 62 counties including Jefferson and Orange.

The motorcade rode into Orange County from Lake Charles, where the president surveyed more extensive damage Laura inflicted early Thursday. Laura arrived on the coastline as a Category 4 hurricane.

Weber boasted the coordination of local, state and federal governments in the response to a hurricane that has been connected to the deaths of 16 persons, according to multiple reports. (Carbon monoxide from improper indoor use of generators has been blamed for six fatalities in the Port Arthur area.)

“One of the fun things he said inside, what Governor Abbott said, was midnight during the storm, the president called him. It was 1 a.m. D.C. time,” Weber said. “We have seen FEMA get on board, the Department of Homeland Security get on board quickly. Again, I’ve never seen it this fast. So, I would say people can be excited that it ought to be coming any day now.”

Orangefield resident Star LaFleur and her family evacuated to Dallas and returned Friday to no electricity.

Her wish was that Trump “sees that there’s enough damage out here, that everybody’s trying to come together as a community.”

Trump’s visit was a historical moment for Ann Modica — who lives on FM 1442 — to capture in person, although Trump could hardly be seen going from his motorcade inside the Expo Center.

“I know how helpful he’s been in the past, so I’m trusting he’s going to do the same with Orange, and we’re looking forward to all the help we can get,” the retired Orangefield High School history teacher said.

“It’s the folks in Orange County and Lake Charles that need help,” Courville said. “They need help, federal help, whatever help they need. It’s their time. We got help when Rita hit in ’05, and they need help now. That’s what I’m hoping that he does. He appears to be a compassionate man, a good president.”