Cardinals on the mark at practice and class 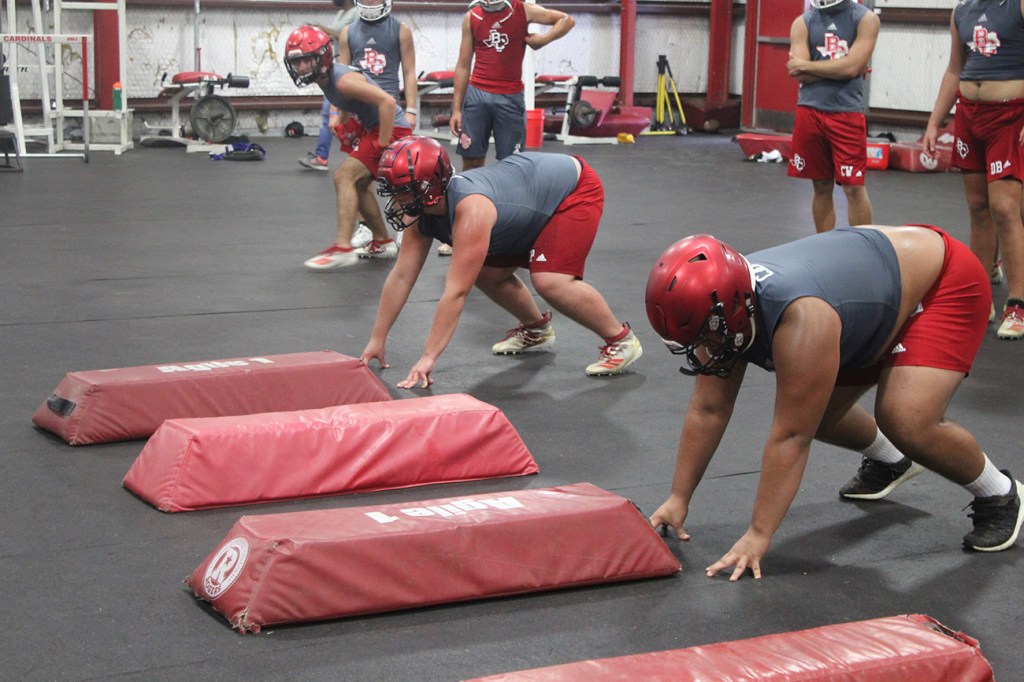 Van Wade/Orange Leader The Bridge City Cardinals have been busy inside and outside during practice. Here, they moved their practice inside Tuesday after lightning and rain came through.

BRIDGE CITY – It’s been a busy week thus far for the Bridge City Cardinals as they not only officially started football practice but they have returned to school as well.

Athletic Director and head football coach Allen DeShazo liked the numbers he had during the entire summer workout program and was impressed with the numbers at practice this week.

“We have about 120 kids and that’s higher than last year,” said DeShazo. “We’re hoping to carry anywhere between 35 and 40 on varsity this year. Looking at it, we will probably have almost 25 more on the JV team this year and we have about 50 in the freshmen group.”

It’s certainly been a different start for the Cardinals, who usually opened up their first week of practice in the mornings, but now they are going in the evenings due to school starting so early.

“It sure was a lot cooler during those 6, 7, 8 a.m. practices but the kids have adjusted well,” said DeShazo. “With school starting already, it already puts them in a good, solid routine. The first day they were a little tired after being in school all day, but it’s all pretty good now. At first, you wondered how they were going to handle it and they’ve done really well. Starting school now, puts us in a good situation already while other schools will have to adapt to it in the coming weeks.”

The coaching staff has been adamant about the COVID-19 protocols that have been put in place and it is something they know they will have to battle this season, but it is all about keeping everyone healthy.

“There is a lot that goes in to it but the kids have responded to everything so well, starting with wearing the masks, we’ve had very little issues with that,” said DeShazo. “They also bring their own water to practice and we have a designated water person to make sure all of it remains safe. When practice is over, we try to get them in, let them take showers as quickly as possible and then getting them out of the fieldhouse as soon as possible. It’s tough for them to not stick around and mingle like they used to, but it is what has to be done and they understand.”

The Cardinals will look to fly into the playoffs again this year as the program is going from 4A Division I down to 4A Division II after Coach DeShazo and staff led them to the postseason last year.

“It’s a tough deal to not have two scrimmages because we usually used the first one to get those veteran guys in there and used the second one to look at some of the younger kids and evaluate,” said DeShazo. “But everyone is in the same situation. We’ll go hard during our scrimmage and then get ready for the Buna Cougars in the opener. It’s going to be interesting to see how everything plays out and we just pray that everyone stays safe and everyone can play some football.”