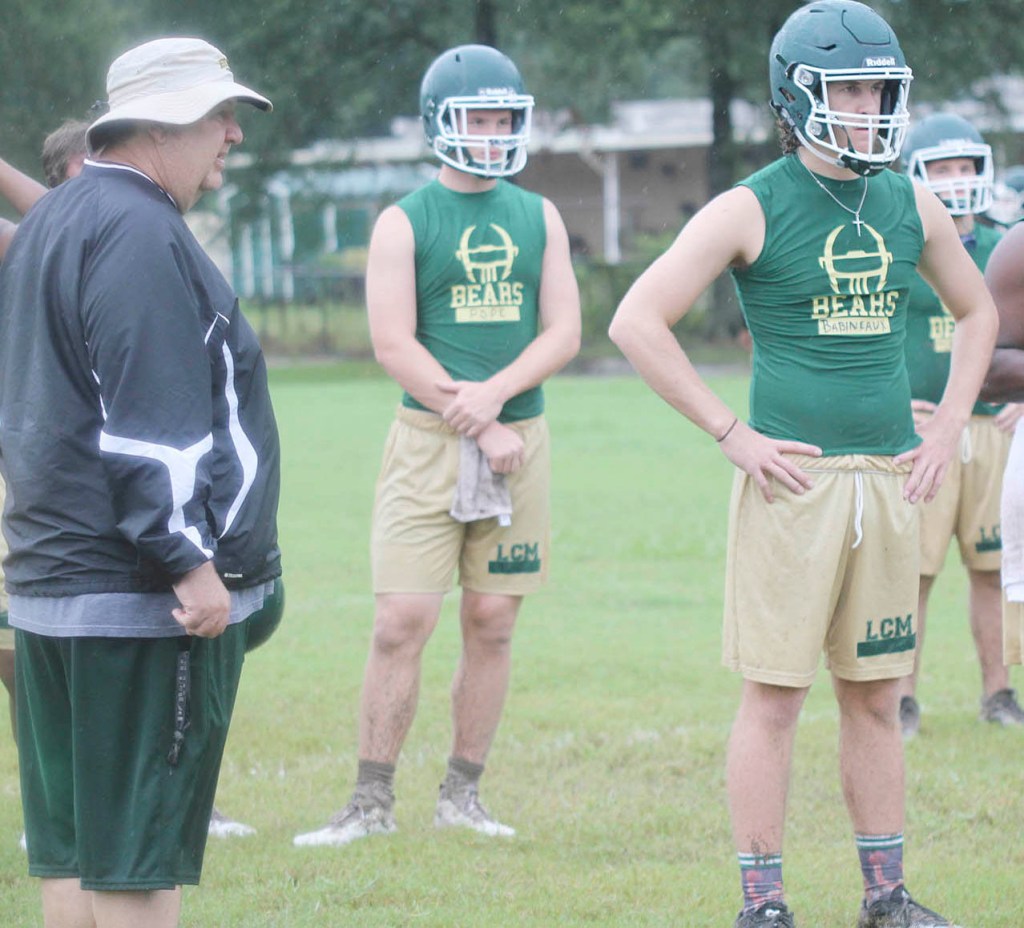 Van Wade/Orange Leader LC-M coach Randy Crouch has watched the Bears operatw smoothly through the first two days of practice despite all of the new guidelines due to COVID-19.

LITTLE CYPRESS – In Bear Country, the Little Cypress-Mauriceville Battlin’ Bears have been beating the heat and getting productive practices in during these trying times during the COVID-19 virus.

The Bears had solid numbers, getting close to matching last year’s turnout.

“We’re super pleased, we have about 100 kids or so and that’s a good number,” said LC-M athletic director and head football coach Randy Crouch. “We figured we would because we had a great turnout throughout the summer.”

LC-M players 10th through 12th grade reported to the fieldhouse at 7 a.m. Monday while ninth graders reported at 8 a.m. The Bears are sticking to the morning routine pretty much until school starts Aug. 17.

Crouch and the entire coaching staff and the great custodial and maintenance crews have done a tremendous job in keeping the school as safe as possible during the pandemic.

“The kids and coaches are doing a great job wearing their masks and have adjusted well,” said Crouch. “We’re dealing with so many new things during this. You have to make sure the shower situation for everyone is up to par and a lot of sanitizing goes into that. We make sure they turn in all of their workout clothes so they can immediately get washed and ready to go for the next day. We have designated water areas on the field and in this heat, we want them to stay hydrated even more. We always have that one person that kinda guards the water and make sure everyone stays safe while drinking it.”

The Bears have made the postseason six out of the last seven years and the program snagged its first playoff win since 1997 last season when they rolled past Stafford 48-21 in a bidistrict romp.

Coach Crouch and Co. welcomes seven starters back on each side of the ball as they will look to better last season’s 6-5 mark and 3-2 district record.

“It’s a little different having just one scrimmage, because in the first one, you get to look at a lot of kids and evaluate a little more while the second one was all about fine-tuning things before the opener,” said Crouch. “It could be interesting when it all gets rolling and you know some teams will be affected at some point down the road and I sure hope we are not one of them. I hope it doesn’t happen to anyone.”

“We’re doing our best to have a normal environment as possible,” said Crouch. “But you have to be ready for anything. My great coach at Louisiana Tech Maxie Lambright always use to say a Plan A and Plan B is good but you better have a Plan C as well, and that is what I think coaches across the state are preparing for.”